A fun look at the German verb "treten" and its family. We'll learn the origins and loads of useful related nouns and prefix verbs. 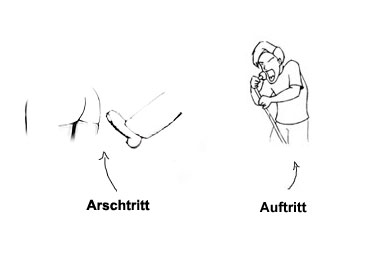 And of it’s maney prefix version.
“I think you meant ‘many’, right?”
Erm… no, I meant maney. Like a mane.
Like here.
“You really spent time on Photoshop to make this, Emanuel?!”
Yeah, it’s a brand new mind map technique I learned in a workshop this weekend. It’s called “visualionzation”. Amazing, right?
Anyway, are you ready step into the world of treten?
Then let’s go…

Treten is the German brother of the English verb to tread and together with words like trample, trampoline or the German word for staircase, die Treppe, they come from the absurdly ancient Indo-European root *der.
Wanna venture a guess about the core idea? It was simply walking, making steps.
Treten and tread have stayed rather true to that, but while to tread became kind of a niche word, treten is super super SUUUPER common. Because not only is it THE word for tread AND step, it’s also the word for kicking.
Not to far fetched, I think. It’s just the intent that’s different. The motion is kind of similar for stepping and kicking. You bring your foot forward. Well, unless we’re doing roundhouse kicks. But who does those anymore these days… Chuck, we miss you.
Anyway, the context will usually make it clear whether it is to kick or to step. Let’s look at some examples…

The noun for treten is der Tritt but… you know how it is with German and English.

“What do we do for nouns?”
“I don’t know. I was just gonna use step again.”
“Hmmm…. okay, I’m gonna make Tritt NOT the translation for step then but only for kick. For step I’ll use the noun of schreiten. And I’m not gonna use schreiten itself.”
“Hahah man, they’ll hate you.”

And so it was. Der Tritt is the kick and for step German says der Schritt.

Aarrghhhh, the cringe. It’s too strong. I shouldn’t have done this.
Anyway, while we’re at kick… in English, there’s also the metaphorical kick. No so in German. Tritt is really only a kick with the foot, while the metaphorical kick is … der Kick. How creative!
Cool.
So that’s treten.
Now, let’s take a look at the prefix versions. Aka … the horde.
Seriously, there are quite a few and they’re super useful.
Let’s start with most crazy one.

Like most , eintreten works with both ideas of treten – stepping and kicking. For kicking, the meaning is unusually literal.

But with stepping, we’re back to the twisted “prefix-normal”. Which means that the verb twists the idea in various way while kind of tip toeing around the most straight forward meaning.
Eintreten taken literally would be to step in or in one word: to enter (by making a step).  Eintreten does carry that meaning BUT it’s rarely used and sounds kind of lofty. Probably because eintreten has so many other meanings. What’s useful is the noun der Eintritt which is entrance in a financial sense… like tickets and stuff. “Wait, you just said that Tritt only meant kick… ”
Well, that was just for the stand alone. With a prefix, Tritt works fine as step.
“Oh… “

So, eintreten is not used much in the sense of actually setting foot inside of something. But as I said… prefix verbs like to twist and bend things. And eintreten is super common for more abstract “enterings”.
For example in contexts of joining parties, clubs or societies.

And if you’re now like “Tssss… this isn’t too twisted.”, well then what if I told you that eintreten also mean to happen, to take place. Yup, another one. I guess there’s so much happening in the world, passieren, geschehen, stattfinden, sich ereignen and vorkommen just weren’t enough. We needed eintreten. Half a dozen words. Great job, German. Most verbose language on the freaking planet.
Anyway, the idea behind it is simply that something “steps into reality” and the context you find it in are predictions becoming reality.  So you wouldn’t use it for just random events.

Because of this notion of predictions becoming reality, it’s more useful than the bookish geschehen and sich ereignen. But still, it’s not THAT useful.
And I guess because it’s not THAT useful, there was room for yet another not that useful  meaning, right German.
“Spot on! That’s what I was thinking.”
So German, tell us,  what’s the last meaning for eintreten?
“It is to step up for, in the sense of ideals and similar things.”
So it’s like sich einsetzen für.
“Well, that one is reflexive and there’s a subtle differ… .”
Oh, we don’t have time for that, sorry.
Gotta get to the examples.

Aus is the direct opposite of ein (in a locational sense), and so it’s no surprise that one of its meanings is to leave in the context of parties, clubs and societies.

Another non-surprise is that this isn’t the only meaning.
You’re ready? It also means to kick out in context of horses, to extinguish a fire by stepping on it and – get a load of this – leaking for liquids and gasses. In German these things “step out” of a container. Seriously German, I have no words for this.
“Well, I do. It’s austre…”
Oh whatever, just gimme an example…

The last non-surprise is that austreten does absolutely NOT mean to step out in a literal sense.

This might look like you’re stepping out into the garden, but what it really means is you take a dump in the garden. Yup, you heard that right. Austreten is a tactful option for taking a dump, and it was coined back in the day, when people actually did have to step out to do that. It’s getting a bit out of fashion, though. At least I don’t see it that much these days.  I just wanted to mention it because it has to do with feces and those are always funny.
Oh man … what is wrong with me today. Let’s move on.

The most literal meaning of auftreten has is capturing the moment of putting your foot down, like… in the literal sense of putting down your actual foot, not the proverbial putting a foot down.

But that’s about as useful as a sprained ankle.
What makes auftreten really useful and a word you’ll definitely see  is the idea of going onto some kind of stage. It’s used in a wide variety of contexts, both literal and super metaphorical, from music shows to how you present yourself to things “occurring”. So it has a lot of translations, but the basic idea is always something like “showing up on the scene“.

Now, so far all the ones we’ve looked at were separable. But of course, there are some non-separable ones, too.

I feel like, I keep saying that the whole time but … this one is super uber useful.
And it’s surprisingly clear. If you’ve read my article on the ver-prefix, you’ll know that ver- can carry four notions. But here, it only carries one… the idea of for. So, literally vertreten means “to step for”.
It’s kind of the same idea as eintreten in the sense of stepping up for, but vertreten is MUCH more useful. Because it works for all kinds of contexts… representing and defending ideas, representing people, representing products. Heck, represent is a good translation actually. But let’s look just at some examples…

Hmm… some of you might know that ver- can also carry the idea of away. So politicians vertreten could technically be understood in a different way. But it’s not pun’o’clock anymore, so let’s move right on.
And with the article almost finished, we actually have to set foot into… grammar land.

Be- carries the notion of “do onto” and one effect of that is that it does away with the need for prepositions that indicate direction and having a direct object instead a prepositional blah blah blah… so much Latin. Here’s what I’m trying to jargon…

Both sentences mean that you enter the room, they’re just using different grammar to express that.
As we mentioned in the beginning, treten in isn’t used that much in sense of entering spaces.  But that’s different for betreten. Like many be-verbs it does sound a tad bit technical and dry, but you can definitely find it in daily life, especially in formal or scripted contexts.

And that’s it for betreten.
And for today. Yeay.
Yes, there are still more prefix version of treten (zutreten, übertreten, nachtreten, vortreten, zertreten) but I think you have a good idea of what can be done with the verb and you can figure them out yourself :).
And if you do have a question about them then we’ll just talk about it in the comments.
So that’s it. This was our look at treten and its many versions. If you have any questions or suggestions or if you want to try out some examples, just leave me a comment.
I hope you liked it and see you next time.