Word of the Day – “treiben”

A thorough look at the meaning of 'treiben', all it's super common prefix versions and the connection to the English 'drive'. (*vocabulary increases) 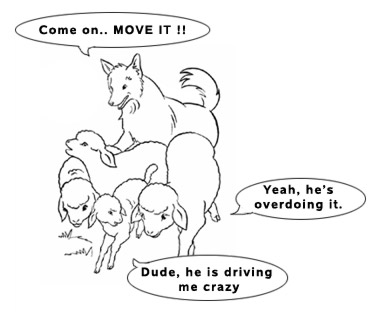 A word that’ll really drive your German forward. Driiive. Draaaaiiiiiiiiifff. Traaaiiiiiiipffff. Treeeeiiibut hey let’s waste no more time with my nonsense and get right into the world of treiben. Sounds good? Perfect.

Treiben has two close relatives in English, both of which can be a translation for it. The first one is to drift.

The other close English relative is to drive. Of course, the first thing that comes to mind is driving a car. But that notion is pretty new. In Old English, some 700 years ago, people still called that “to fare a car”. Wait, can it be?
Meh.. anyway, the original to drive was quite broad and it still exists today. Driving someone off the property for example certainly doesn’t mean chauffeuring them out. And a sex drive is not some sort of adult bus tour or something. These are examples for the original idea of to drivewhich was something like to make move, to push forward. Think of a shepherd leading a herd of sheep up a hill. That’s the perfect image… he doesn’t literally shove or push them but he does make them move (forward). That’s the core idea and it’s especially present in German.

Now, what about this example:

Would treiben work here?
The answer is no. The examples we had above all contained some sort of destination. And German really likes that. Or put the other way around… it doesn’t really like treiben without any indication of direction. So if you were to say

German would be all whiny like “Uh… uh…. where’s the turbine driving the generator to?! Oh god, it’s sooooooo imprecise. Please complete your sentence, I’m so confused. Waaa, waaaaa.”
Yeah, German is really OCD with these things. The solution to this “problem” is a prefix but we’ll get to those in a second. First, let’s look at the other important use of treiben – as a colloquial translation for to do. Think about it – doing something is kind of setting things in motion, making things move. It’s not always idiomatic so you can’t just swap it in for machen or tun, but there are a few very common phrasings.

I don’t really know what it is that they’re doing in the last examp… what? Ohhhhhhhh… I watch… uh… I mean, I see.
This sexample actually brings us to the noun der Trieb, which is the word for an inner drive – the very basic, instinctual ones.

Trieb is also the name for shoots of plants… like… new little branches or twigs or buds coming out from somewhere and it’s just part of the noun das Triebwerk which is the German word for jet engine.

And because treibenhas so many good prefix versions, they all get their own headline so you can find them quicker.

Remember German being OCD about treiben having a destination? Well, antreiben is the word to go for if you do not want to specify one. Just a general driving forward, and the range of contexts is super broad. A coach pushing his team, some inner motivation that drives you and most important of all… engines. And that applies to the verb as well as the noun and any other related words.

So… treiben means to drive, to push if you specify a destination. if you don’t have one, then an- kind of takes the role of that.
Cool, next.

Auftreiben is a bit weird in so far as that only the noun has the literal meaning while the verb itself is some abstract craziness.
Meh… on second thought, that’s actually pretty normal for a German prefix verb. So, der Auftrieb is the word for a force that pushes you upward when you’re under water and it’s also used for stuff that is emotionally uplifting.

The verb on the other hand is completely different. Auftreiben is a colloquial term for to find. Think of a hunt. You’re having a party in a small town, it’s past 10 pm and you’re out of… beer? That’s when you would try to auftreiben some beer. So it’s not finding as in finding something you’ve lost, or finding something randomly on the street but finding something new after somewhat of a hunt.

Not super common, but colloquial and if you’re among native speakers you’ll hear it sooner or later.

Literally, it means to drive off but the only context for it is to drive off fetuses. That’s right… abtreiben means to have an abortion and the noun for the abortion itself is die Abtreibung.

Not one of the most poetic words of the German language but definitely worth knowing.

These two are really useful whenever you’re telling something. If your story is boring you’ll probably spice it up by making everything bigger, funner, more amazingerer. That’s what übertreiben is for… to exaggerate. And untertreiben is the opposite – to downplay, to underexaggarate…

The nouns are die Über-/Untertreibung and they’re totally in line with the verbs.
Now, these were just some of the prefix versions. There are hundreds more.
Okay, no, that was an Übertreibung, there are just a few. Eintreibenfor example is what a debt collector does – “drive in” money. Austreiben can mean to exorcize or sprout (for trees) and sich rumtreibenis a slangy term for being outside, going around. And there are still a few more but they’re really not that common. So I think that’s it for today… but hold on, I see we have a call here… uhm… Alicia from Greensboro, North Carolina, welcome to the show.
“Hey Emanuel, thanks so much for taking my call. And great topic… I’ve been waiting for treiben for a long time.”
Yeah, I’m sure you’re not the only one… it’s really been on my list forever, too. Did the show clear it up a bit though?
“Yeah, definitely… the connection to driving really helped, too… I have a question, though. “
Sure, go right ahead.
“What about the non-separable prefixes? Like… Betrieb and vertreiben… aren’t they related to treiben, too? I feel like I see them quite a bit….”
Oh god, yes. I totally forgot. We can’t skip those two. Do you wanna help me take a look?
“Sure, why not.”

So, do you have any idea what vertreiben means?
“Yeah, I think it’s something like chasing away… like… with the away-notion of ver-“. Does that make sense??”
Yeah, that’s exactly right. Here’s an example:

but it’s also used in a more figurative phrasing for passing the time.

“I guess we can’t skip the ‘mir’ here, can we?”
Nah, then it would sound too much like chasing away.
“And does it work with other words for time… like … Ich vertreibe mir den Montag… would that be idiomatic?”
Not really, it only works with the word Zeit. There’s also the noun der Zeitvertreib, which means the pass-time.
“Wait… you mean Zeitvertrieb, right?”
No, I do do a lot of typos but this wasn’t one. Vertriebis the noun the other meaning of treiben: to distribute.

No idea, if you can see a hint of chasing away in that sense.
“Kind of… I guess. “
This meaning isn’t all that useful though, so I’d say let’s move on to betreiben. Originally, it was just an intensive version of treiben but it’s only ever used in a figurative sense nowadays and most commonly in sense of to run as in running a business.

“Ohhhh… that’s why der Betrieb is the word for a company.”
Exactly,Betrieb is a word for a business. Oh and it’s also a formal word expressing the sense of “being in operation” for machines and devices.

“betriebsblind … that’s a cool word.”
Yeah, and there are loads and loads of other compounds… betriebsfremd(external, not part of the company), betriebsbereit(ready for use) , das Betriebsgeheimnis (company secret) …
“… and Betriebssystemwhich is operating system. I know that one because I have my laptop set to German.”
Haha… I used to do that with my phone back when I was learning French.
So… I think we’re actually done. Or do you have any more questions?
“Hmmm… nope… at least not right now. And if I do later, I’ll just leave you a comment.”
That’s perfect. So thanks a lot for reminding me and helping me with betreiben and vertreiben, and to all you out there thanks for readi… I mean for listening. This was our look at the family of “treiben“. We learned a lot of new words but I think the connection to “to drive is kind of visible in all of them, once you know it’s there.
As always, if you have any questions or suggestions or if you want to try out some examples, just leave me a comment. I’m out. You all have a super Woche.
I hope you liked it and see you next time.

treiben – to drift, to drive (as in make move), also: colloquial for “to do”

abtreiben – to have an abortion
die Abtreibung – the abortion

der Auftrieb – the push, force upward under water
auftreiben – to find (sense of hunting down, digging up)

eintreiben – “driving in” owed money
austreiben- “driving out” something… usually the devil or devil-like features
sich rumtreiben – to be (in sense of walking around somewhere… sounds negative, often used for adolescents)