A fun look at the meaning of "der Ton" and what music has to do with pottery. And a bit of basic acoustical physics for good measure :) 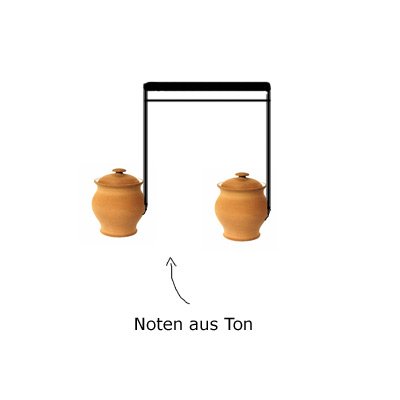 and welcome to our German Word of the Day. Do you know what music and your coffee cup have in common?
No? Well, you’ll find out today, because we’ll take a quick look at the meaning of

I think the musical side isn’t a surprise to most of you, because English, too, has the word tone.
They both come from the Latin word tonus, which itself comes from Ancient Greek tonos and already back then it was used to express the meaning of pitch, voice or musical key. The very origin however was the even more ancient Indo-European root *ten- and that was about… drumroll… stretching.

The same root as in words like tense, tendon or tension. Or many other words, actually. That family is incredibly big and full of surprises like tent or tenure or Tantra, which is about stretching the… uhm…  fun.
But anyway, the reason why the Greeks used it in the context of music was that they used a lot of chord or string instruments, like for instance the lyre, and those were essentially just cords or strings under tension. And the pitch of the sound depends on how much tension there is.
Today, pretty much all European languages use some version of the old tonos and the core idea is the same, but of course there are minor differences.
However, before we take a closer look at how German uses Ton, I actually want to take a slight detour to Ton in physics.
It’s not really about German, and you could technically skip it, but hey… it’s actually really interesting stuff, and who knows, I like talking about it and many of us have a lot of time to read anyway :)

In physics, a Ton (as well as English tone) is a completely regular sine function. The pitch of it depends on how many times it goes up and down in a second – the more often, the higher it sounds.
Now, if you layer some of those basic Töne together, you get what’s called a Klang.
And that’s for instance what the string of a guitar makes.
When we pluck it, it vibrates. We can even see it with the deep string of a guitar. How it fast it vibrates depends on how long it is, how thick, and how much tension there is. But the key to the sound it makes is that it vibrates in many ways at the same time. Let’s say the entire string is vibrating is 100 times per second. That’s a reasonably low sound. But on the string there’s also a vibration that’s 200 times per second. And one with 300 times per second. And 400. And so on. Here’s a very basic drawing. 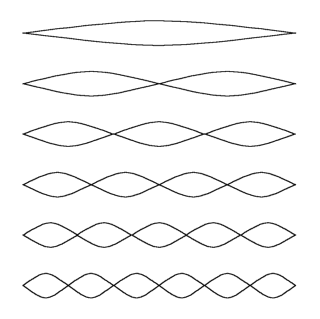 The basic vibration is called Grundton (primary tone), and the others are called Obertöne (overtones) and what we hear as the sound of the guitar is the sum of all those vibrations together. The Grundton is what we perceive as the pitch, but the sound of the guitar is determined by how loud each of the Obertöne is.
And it’s not only for a guitar. Most instruments work like that and even our voice does. The specific character of our voice is a result of how the shape of our throat, mouth and nose influences the loudness of all these Obertöne.

Now, what’s really fascinating is what happens if we add more and more vibrations, and also “unrelated” ones. So we take 100, and 102 and 105 and 108 and so on.
Because the result of that is… noise.
Have you ever put both your forearms on a piano? That’s not really a chord anymore, right? Now imagine between the normal keys are many more keys. If we were to put our forearms on that thing, it’ll sound like a an airplane starting. And if we add more keys for higher notes, we’ll eventually get something that sounds like heavy rain.
The human ear can distinguish vibrations between about 20 and 20.000 Hertz (that’s the word for times per second) and if all of them have the same intensity, the result is white noise. A bit like a really really heavy rain. Or an old TV without signal.
You see, the more tones we add, the less discernible they become to our ear and the less your brain perceives the whole thing as “tonal”. Instead, we hear it as noise and the character of it again depends on how loud each vibration is. A starting airplane has a lot of loud deep vibrations, a waterfall has higher ones. And a strong wind is right at the border between sound and noise.

So, the key thing is that all sound, whether it be the sound of the sea or the sound of a flute, is ultimately a result of how loud the many different vibrations are that our ear can decode.
And from this, it is actually only a small step to how MP3 works but that would really be too much for today :).
Let’s now get back to actual German.

And in everyday German, Ton is used in a much broader sense than in physics.
In music, it is the word for a single note. Or played note, we should say, because German also has die Note. Note is used for the symbol, while Ton is the actual sound you create for that note.

Also noteworthy are die Tonleiter (literally: note ladder) which is the German word for musical scale, and the of course die Tonart, which would literally be tone-species. English calls it key, though.

Now, beyond the realm of music, Ton is also used in a broader sense of audio or sound.

But sound is a really tricky one to translate because German has several options for it. Besides Ton, which is sound in the very general sense of audio, there is also der Klang. We’ve learned that in physics it refers to the sum of a bunch of vibrations so long as they sound “tonal” and the everyday meaning is pretty in line with that because a Klang is generally the sound of an instrument or the voice.
And  then there is das Geräusch, which is basically sound in the sense of noise.

We can also find Ton beyond the realm of actual sound, but we don’t need much explaining because it’s similar in English.

And also the related words are pretty easy to guess from context.

Another really nice one is eintönig, which is pretty much a direct translation to monotone.

And of course we must not forget the most important one of them all:  betonen.
Taken at face value, it means something like putting sound on something, and that’s not too far from its actual idea of giving emphasis. The translation depends on context, but the idea is always the same.

Cool.
So now we have a pretty good overview over how Ton is used in German.
With one big exception…  the Ton you can make coffee mugs from.

And you might have guessed it: besides all the sound stuff, Ton is also the German word for clay.

Now, German actually has a second word for clay: der Lehm. Lehm is for instance one of the materials used to build houses with way back in the day. Sometimes, people say that Ton is Lehm that was in the oven, but that’s not true, actually. The real difference is actually… the grain size.  Lehm and Ton are both a mix of certain minerals, but the grain size of Ton is smaller. So Ton is basically refined Lehm.
And that’s when the kissing starts on dates. I mean… I think. I haven’t tried it yet, but I’m sure it’s a total pantie-dropper. I mean… is there anything more sexy than unsolicited trivia?
Seriously though, the bit of trivia most of you are actually waiting for is of course the origin of der Ton as in the material. Is it a pure coincidence? Or is there some really really really twisted logic that connects the idea of stretching with the idea of… well.. clay.
The answer is… drumroll…
it’s a coincidence. Der Ton, the material, belongs to a family of dicht. But we’ll look at that some other time :)

And that’s it for today ;)!
This was our look at the meaning of Ton and how it used in German. And a bit of physics that I am sure you have completely forgotten.
But don’t worry about it –  it won’t be part of the quiz.
Or will it?!?!
You’ll have to take the quiz to find out ;).
And of course if you have any questions or suggestions just leave me a comment.
I hope you liked it and see you next time.

Word f the Day Special – Word for Noises in German

betonen = to emphasize, to stress, to underline
die Betonung = the emphasis, the stress (in language)

eintönig = boring, monotone, monotonous
vertonen = compose/add music to something
ertönen = to sound (a sound appearing, sounds a bit epic)
getönt = tinted (pretty much only for glass)