A Taste is a key. Boring. But that's not all. Also on the menu: have a riveting look at the family, stunning relations to English and lots of new cool verbs. 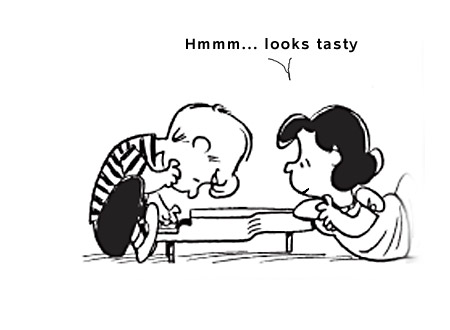 And I have to say… I’m don’t have degree in seeing but to me Taste looks a LOT like taste. However, most of you probably know that the German word for taste is der Geschmack … or at least you know it’s something with smack or shmack or something.
Die Taste on the other hand means the key. Not in sense of lock, but in sense of buttons. A piano, a computer  keyboard, the new iPhone Press® … they all have Tasten.
Looks like German was dancing again. It has done the twist… haha… or has it? Let’s find out :)

Die Taste and the taste are not just two words that are spelled the same by coincidence. They are related. So who messed up, German or English. Place your bets now.The origin is the Latin verb tangere. Tangere  is where words like tactile, tangible or contact come from… words that still conserve the meaning of tangere… to touch. Seems like German stayed the course.
So what happened in English? Well, English and German both imported the verb from Old French taster which in turn came from Latin taxtare, an intensified version of tangere. Think of a merchant touching some fabric or something trying to determine the quality, the value. That is taxtare. Touching with an added notion of examining. By the way… this idea of examining, estimating value is also the base for the word tax. Anyway, taxtare  was then imported to French,  the language that invented the Gourmet. No wonder it soon took on the side notion of checking out food by mouth. Them,  English imported it, and first it could mean to touch, to examine but also to take a small sample in context of food. And that’s what it eventually focused on. So the development is something like this … touching, checking out by touching, checking out, checking out samples of food, taste. Makes sense once you know it.
All right.

The German version of the verb, tasten, has stayed true to the original idea of touch. BUT…  there is a biiiig difference between the verbs to touch and tasten. They’re pretty much never translations for each other. Why not? Because you can touch something, but you cannot really tasten something. Tasten is not about making contact, it’s about the motions you do. Like… you can actually tasten without touching. Tasten has this notion of search. Here’s an example:

This means that Frodo has a vague idea where the ring is but I can’t look so he carefully pats around the area. No idea if English has a verb for that. Here’s another example.

So yeah…the core idea of tasten is definitely touch. Heck the German term for sense of touch is der Tastsinn . But if you need a translation for to touch, you’d need anfassen or berühren. Oh or anstasten… which brings us to the prefix versions of the verb.
Antasten does mean to touch, but only in sense of “undoing untouchedness”… uhm…  like… anstasten kind of  means to not leave untouched.  I don’t know how else to say… antasten is touching something that is untouched and shouldn’t be touched, mostly in context with abstract things. Let’s just look at two examples…

I hope those give you an idea.
Next, there is rantasten (the r-version) or the formalererer herantasten. This one combines the notion of care, that tasten has with the idea of search. Like… imagine your foot hurts and you’re trying to pinpoint the exact origin of the pain. You would start somewhere a bit remote and slowly, carefully close in. That is (he)rantasten in the most literal sense. But it’s mostly used in abstract contexts and is not about actual touching.

The next one is abtasten, and this one is full out touching and full out examination. It’s what air port security does when they pat you down but it’s also used in context of gathering information about a surface via a laser or radar or something.

Last but not least, there is ertasten and that is basically touching in search combined with the idea of finding.

And…  I think that’s pretty much i… oh no wait, we didn’t actually do any examples for die Taste. Here are the German names of some of the most important Tasten

And then there is die Tastensperre (the keylock) and of course die Tastatur which is the keyboard.
Cool :). Now we’re really done.
This was our little look at the family of die Taste. The very core of  it is  touch but it has the added notion of examination. In English that slowly shifted toward examining by mouth, in German it hasn’t changed much and that’s why we have a really nice pair of false friends today :).
As always, if you have any questions or suggestions just leave me a comment. I hope you liked it and see you next time.