Word of the Day – “streichen”

A fun look at the family of "streichen" and what painting your wall has to do with emphasis, petting your cat and pranks. 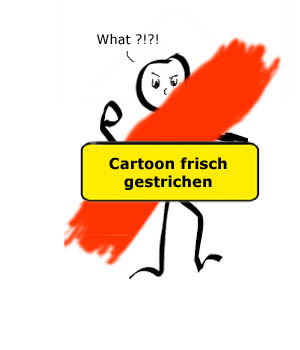 and welcome to our German Word of the Day. And today, we’ll have a look at the meaning of

Streichen is related to the English word to strike, and by looks and sound, the resemblance is striking (*cue crickets). By meaning not so much though. There, it is much closer to the verb to stroke.
Because the core idea of streichen is to move something somewhat gently across a surface. And there’s a quite a bit that you can do with that idea.

One possible translation is of course to stroke but streichen has somewhat of a direction to it. The word for the caressing-stroking is streicheln.

Now, you’ve probably have noticed the blue preposition in the first example and maybe you’re wondering why I highlighted them. Well… we need it

That wasn’t loving. That was actually a pretty bad party prank and Maria was really really pissed when she went to the bathroom. Why? Because Thomas painted her back.
Streichenis THE word for to paint (in functional contexts, so not for art-sy painting). You move a brush across a surface.

Now, just like you move a brush across a surface, you also move a pen across the surface. And that’s the key to the next meaning of streichen. Take a looks at this example:

That doesn’t mean that she made sex more colorful. She basically did this: She canceled it. Oh and by the way, der Streich is the German word for prank. But it had (and still has to some extend) the same general meaning that strike has… a (very) quick, hard stroke. Sounds like the old Germanic tribes had a very hands-on approach to pranking.
Anyways, so yeah… streichen is also used in the sense of canceling or cutting. It’s a bit formal sounding though, so you’ll most likely see it in the news.

Cool.
Now, of course streichen also has prefix versions but there are really only a few that matter and they’re super intuitive, so let’s just look at some examples

And this whole notion of lines brings us right over to the noun der Strich.

By itself is Strichis basically the result of moving a pen over a surface in a somewhat straight line.

As you can see, the uses are pretty literal. For more abstract lines, like a bus line, walking in a line or the red line, you’d use the word die Linie, but there are a few REALLY common idiomatic phrasings that use Strich.

Of course there are also a few nice compounds, but with what we’ve learned so far

And then there’s the Strich in context of hookers. Yes, you read that right. Auf den Strich gehen is a very common phrasing for to prostitute oneself and the (Strassen)strich is the area where people do it.
The origin of that phrasing is actually an older meaning of streichenthat we haven’t mentioned yet: the idea of walking around, traveling.
The verb itself isn’t used anymore, but the idea still lives on in the noun der Landstreicher(hobo, homeless person traveling) and the verb verstreichen, which is a rare alternative for vergehenin context of time passing.
And if you’re now wondering how that ties in with the rest… well, one way to make a connection is to think of traveling as a moving across the surface of the earth.
But there’s more. You see, the origin of the whole family is the super mega ancient Indo-European root *ster(e)- and the core idea of that root was something like stretching, spreading out, expanding. The stroking streichen has focused on the movement you’re making to spread something. But the noun Strich for instance does carry a notion of a line extending. Just like der Strand (beach) or der Strahl(the ray) and … drum roll please… street. Yes, streetis actually a distant cousin to streichen and Strich as are lots of other words like structure or strategy. And I wanted to talk about all those connections in detail but … I think we have to streichen that. Like… cancel it.
“Boooooooooohhhhhhhhh… no meaning of life and now no etymology. Shame on you, Emanuel.”
I know, I know, but in this case, it’s better if we do that in the comments because it’s just too much. If you’re nerd enough, here’s the link to the root *stere on Etymonline … the part that’s unterstrichen is the link :).
And that’s it for today. This was our look at streichen. It’s about moving something about a surface and it can mean to paint as well as to cancel and it’s used in context of making lines with a pen.
As always, if you have any questions or suggestions or if you want to try , just leave me a comment.
I hope you liked it and see you next time.