Word of the Day – “spalten”

A fun look at the meaning of "spalten" and its family and what that has (or doesn't have) to do with splitting a bill and rewinding a song. 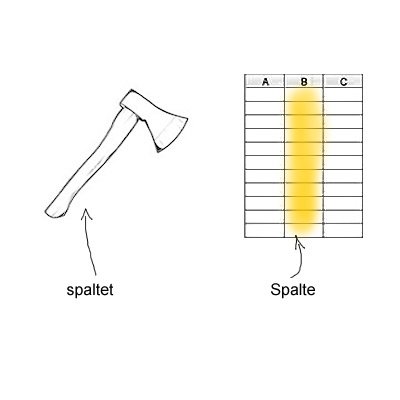 and welcome to our German Word of the Day. And today we’ll take a look at the meaning of

And man… what a sound! And maybe that’ just me, but it matches really well with what it stands for. Spalten!
Like… a chasm opening up during an earthquake. Or a bolt of lightning smashing into a tree.
Well okay, I guess technically those would sound more like “cshrrrkh”. But at least to me, spalten fits well, too. And this notion of forcefully splitting in two is kind of the core of spalten. And not only that verb. It actually was also the core of the Indo-European root *(s)pel-.
Which is uber ancient, btw… just in case you were wondering.
And you’ll be surprised how many words come from it.
But more on that later. Let’s start with spalten itself….

… and a few examples.

To splitand to divide are the common translations. But we need to keep this notion of force in mind. That’s an integral part of spalten. So spalten is NOT the right word for, say, splitting a bill….

“Do you pay together or separately?”
“Oh, we’ll pay together. But hey, could you bring us an ax? We’d like to split the bill.
It’s our Viking ritual… we’re from Norway, you know.”

And same for dividing numbers or groups into subgroups. The proper word for all these contexts is teilen.
Spalten has a notion of force. Or we could say, a focus on some sort of rift being created.
Which brings us right over to the three nouns der Spalt,die Spalte and das Spaltum.
Nahhhh… I’m kidding. Of course, it’s not three nouns for one verb. That would be ridiculous. Of course, only the first two exist :).
Der Spalt is used for a somewhat long, but very narrow space between two separate objects.
Die Spalte on the other hand is a deep narrow gap inside one thing.

Yeah… I know… just don’t think about it. It’s just an example, okay.
Please direct your attention back to die Spalte because it’s also the German word for the column of a table or on a page layout. Think about it… it’s deep and narrow and inside one object.

Cool.
Now, these nouns are not the only related words. There’s a bunch more and they span over a wide range of contexts.

Cool.
And now that we know spalten and the “inner circle” of the family, let’s turn back to the origin and nerd out over the more distant cousins.
As I said in the beginning, the origin is the uber ancient Indo-European root *(s)pel-, which was about the notion of “forceful separation”.
And I’m sure some of you have been wondering whether split was actually related. Well… it is. And also splinter, splice and spillare part of the family. And also flint-stone, which got its name because it splinters easily. Oh and let’s not forget to spoil. The first thing that comes to mind here are movies, but back in the day, to spoilwas about robbing, plundering (just think the spoils of war). And before that, it was about skinning animals.

And of course there’s also relatives on the German side. For example der Splitter, which is the German word for splinter or a small shard.

One that’s a bit more obscure is die Spule.Spule is the German word for coil, and originally it just referred to a cut off piece of wood that you’d wrap your yarn around. And while Spule itself is not all that useful, unless you’re an engineer, you might come across the verbs vorspulen and zurückspulen, which are the German words for to forward and to rewind.

Though nowadays, with Youtube, Blu-ray and streaming, they don’t make that much sense anymore. Like… and people might just say vor- and zurückskippen or vor- and zurückmachen.

And the last word I want to mention is der Spliss. I think, the word also exists in English and it is the condition when the ends of your hair are split.

And thus we’re back at spalten and at the end of this article :). This was out little look at spalten and its family. I didn’t mention ALL the words there are, but I’m sure with what you’ve learned today, you can guess the rest from context.
As always, you can test yourself about the most important points in the little quiz we have prepared.
And of course, if you have any questions or suggestions, just leave me a comment.
I hope you liked it and see you next time.

spalten = to split, to cleave (not for splitting a bill)
gespalten = divided
zwiegespalten = torn (only for people who are tron between two options)
zwiespältig = ambivalent, dichotomously
der Spalt = slit, crack (between two objects)
die Spalte = split, crack, crevasse (withinone object, like a mountain); column (for tables)
spaltbar = fissile
der Spalter = person who splits a group from within by not, say, joining the skinny dipping (colloquial)
der Splitter = the splinter, the shard
die Spule = the coil
vorspulen = to fast forward (from back when there was still tape recording, slowly fading away)
zurückspulen = to rewind (from the days of tape recording, slowly dying out)
zurückmachen = to skip back (in a video, also “zurückskippen”)
Haare spalten = splitting hairs
der Spliss = split ends (for hair)
die Haarspalterei = the splitting hairs (figurative)