Word of the Day – “die Schwelle”

A fun look at the meaning of "die Schwelle" and what doors have to do with ears and inhibitions. Also: some words for swellings. 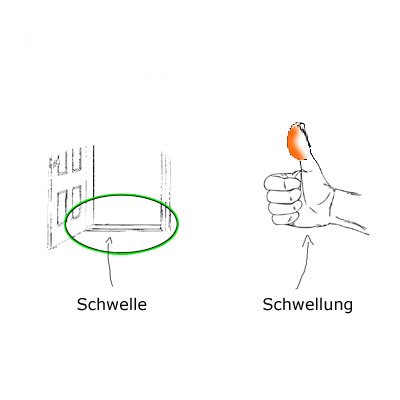 and welcome to our German Word of the Day, this time with a look at

And I’m sure that based on the looks of it, many of you immediately thought of to swell.
But are things really as they seem?
I mean… looks can be deceiving, right?
But then again, if it looks like a duck, swims like a duck and quacks like a duck, then it probably is one.
In fact, I’m curious as to just how suspicious you really are of German, so let’s do a little poll.

And now, let’s jump right in.

German does indeed have a direct counterpart to to swell – the verb schwellen. It’s not used that much itself, because the prefix version anschwellen is more common for the act of swelling, but you’ll definitely see the noun die Schwellungand the ge-form adjective geschwollen and the meanings are pretty clear, I think.

There are also a few more distant relatives, but for those too, the core idea of swelling is pretty visible.

The only one that doesn’t seem to fit in is the noun die Schwelle. Because when you look up die Schwelle in a dictionary you get… doorstep. And more generally brink, threshold.
Now, a doorstep does kind of represent the threshold between the home and the outside world. In fact, a groom does carry the bride across the “threshold”, not the doorstep, in English. So that connection makes sense. And when we’re high… *clears throat… ly creative, we could see a doorstep as something of a little swelling in the otherwise even ground. So I guess it would kind of make sense if there was a connection.
But in this case, there isn’t. Die Schwelle simply comes from a different family. It’s actually related to the English sill and the original sense was simply something like “board”. There might be a connection also to the German word die Säule (the column) but there’s not enough proof for that.
Anyway, so the core idea of die Schwelle is some sort of border, or limit. It’s not the only word for that, and it doesn’t always sound idiomatic, but it’s pretty standard in contexts of some sort of signal detection and there are a few other nice uses as well.

And with that example I’ve also crossed the Niveau-Schwelle, so I think we’ll wrap it u… oh… wait, hold on there’s a call coming in.
Pjotr from Poland, welcome to the show.
“Hey Emanuel, thanks for taking my call.”
No problem, what can I do for you.
“So I was wondering about schwelen. Just this smorning I read something like schwelender Konflikt which translated to smoldering conflict. And now I’m wondering… schwellen would kind of fit the meaning. So was that a typo?”
Oh nice question!! No, that actually wasn’t a typo. German really does have the verb schwelen and the meaning is indeed to smolder.
“Like … slowly burning without there really being a flame.”
Yeah, exactly…. so let me check real quick… erm… okay, no, looks like schwelen is NOT related to schwellen.
Actually, it belongs to the same family as sun, die Sonne and the Greek helios and it comes from the Indo-European root *suel which also meant sun.
“Oh nice… “
Now, schwelen is pretty rare actually, but I just saw another word that’s part of the family and that one is actually pretty useful… schwül.
“Oh like homosexual?”
No, that’s schwul (for men), without umlaut. Schwül is a word for a type of weather… stuffy, humid, hot air. The dictionary lists a whole bunch of options and I don’t know which one to pick, but schwül is essentially this kind of air you often have in summer when everyone is yearning for a thunderstorm. That’s called schwül.

The word schwul probably does come from schwül though. Back a few hundred years, one term for gay men was “warmer Bruder”. There are many theories for where this came from,… like… their skin is warmer. Or they’re just luke warm toward women. Or they’re like a warm, compassionate woman toward men. And there are more. But either way, almost 200 years ago, people in the Berlin region as well as street thugs started using schwul as a synonym for warm in that context and the word caught on pretty quickly.
“And… is it … like.. is it okay to use it?”
Pretty sure it used to be deragatory because society was stupid, fearful and restrictive back then. But it’s completely neutral now. Like the color green. If you want to you can say it in a spiteful way, but the word itself isn’t charged anymore.
“Cool, thanks a lot, that was really interesting.”
No problem, man, thanks for the question :).
And I think that’s pretty much it for today.
This was our look at the meaning of die Schwelleand the verb schwellen.
As usual, if you want to check how much you remember, you can take the little quiz I have prepared.
And of course if you have any questions or suggestions, just leave me a comment.
I hope you liked it and see you next time :).

schwül = stuffy, humid air (only for weather, not for rooms)
schwul = gay