Word of the Day – “der Schwarm”

A quick, fun look at the meaning of "der Schwarm" and what a flock of birds has to do with your crush. Yup, YOUR cursh. 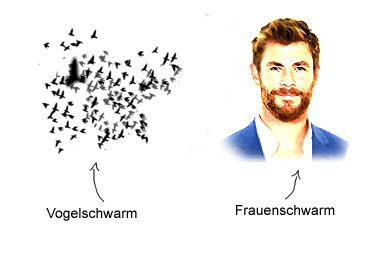 Because a Schwarm is quite common in spring, and it’s one of the best things about it.
Now you might be like “Oh, you mean like  swarm of blood sucking mosquitoes. Yeah, that’s really great… on opposite day.”

So yeah, der Schwarm is the German word for swarm.

Wow, that’s probably one of the dumbest examples ever :).
Anyway, the origin of swarm and Schwarm is most likely just an imitation of the sound swarms make when they swarm around our heads. Which brings us right to the verb schwärmen, the German version of to swarm.
One of its meaning is of course the literal action of swarming.

But Germans kind of liked the verb. Like…
“Oh, schwärmen is such a nice verb.”
“Yeah, such a pointless umlaut, so awesome. Really a pity that its meaning is so narrow.”
“Yeah, why don’t we find some crazy figurative use for the terrific verb.”
And so they did… behold…

Yup, schwärmen means to rave.
Now you might be like “Hmmm… that makes sense. A swarm does look kind of wild.”
But this notion of wild is actually NOT the core idea of schwärmen. Schwärmen is to rave in the sense that you’re really infatuated with something and you share that with the world. And that kinds of makes sense, too. Take the second example… Thomas is definitely excited by the beer, that’s kind of the general unrest of a swarm. And it he keeps circling around the topic, just like a swarm of mosquitoes is circling around our heads. And his mind is … well… not completely focused and clear, just like a swarm doesn’t always have a clear direction.
“Excuse me, Emanuel, but I have a PhD in Swarmetics and Swarmology, and swarms can actually be very fast and efficient problem solvers, so what you said wasn’t accur…. “
Okay, okay… sorry that I’m trying to make a connection.
Ugh, science. Such a buzzkill.
Get it, get it… my swarm noise reference? Hold on, give me a second, I have to do something…
…*pats himself on the shoulder…
Okay… so yeah… this schwärmen von in the sense of being infatuated, raving  is super  common and there are also a few related words with it.

Yeah, that was a little insight into how I struggle with the English language sometimes… so maybe you don’t feel so bad about your German pronunciation :).
Anyway, the last few examples actually lead us right up to where we started… the mysterious other meaning of Schwarm.
Do you have an idea :)?
Der Schwarm is a common Germar for the person you have a crush on…  or in short… your crush.
It’s kind of funny when you think about it… a crush really is a bit like a swarm in your head, flying everywhere, making you nervous and excited.

I guess we should note that Schwarm really ONLY refers to the person,  NOT the feeling. If you want to say that you have a crush on someone, then sich vergucken is the best choice.

And that’s it for today :). This was our look at the meaning of der Schwarm.
And now we can all forget about German and go out to the park and meet one. I mean… a good Schwarm, not a blood sucking mosquito one.
As always, if you have any questions or suggestions, just leave me a comment.
I hope you liked it and see you next time.