Word of the Day – “schüchtern” 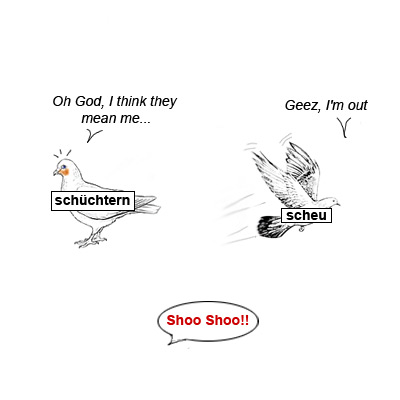 and welcome to our German Word of The Day, this time, with a look at a word that can even give fluent learners a sobering reality check about pronunciation.

I mean, come on… it might not be as bad as Eichhörnchen or that one infamous metro station in Berlin that contains these consonants:

But schüchtern is definitely a one of those words that can make you feel shy about your pronunciation.
Which is a perfect match because schüchtern actually means shy.

The origin of the family is the rather un-ancient Germanic word *skeukh(w)az which was about being afraid. And there might be a connection to the ancestor of to shoot – to the actually ancient Indo-European *skē̌u–  -with the common theme being “make go fast”. Like… when I scare a deer in the forest, it starts to run really fast.
But there’s no consensus about this theory, yadda yadda yadda, science science science. It’s still good material to impress your date with.

I haven’t thought this through till the end to be honest. But I don’t have any dates on the horizon, so there’s still time I guess…. *sad piano…
anyway…erm… time for some actual examples for schüchtern…

Now, if you look for shy in the dictionary, you’ll find that German also has the word scheu. Which sounds much more like shy and it’s MUCH easier to pronounce than schüchtern. I mean… schüchternes Lächeln?! Come on, maaaan.
The thing with scheu is that it’s the more “instinctive” type of being shy. I don’t know if timid is a good fit, but scheu definitely leans more toward scared, and it’s the perfect word for animals.

And while it is not really used that much for humans by itself, there are a few quite useful compounds that ARE used for humans in the sense of someone being “avoidant” of something… like… this reaction of “Ewww, get that away from me.”

There are a few other established ones, but feel free to play around and make up a new one… like spaßscheu or romantic-comedy-scheu. Native speakers will understand and it’ll sounds creative to them rather than “wrong”.
Cool.
So scheu is a visceral, instinctive type of shy that leans toward fear and schüchtern is this typical human type of shy that comes a lot from our mind and soul.

Now, there’s one important pitfall to be aware of and that is shy in the sense of short.

This shy is NOT translated with schüchtern or scheu and it would make absolutely no sense to a native speaker if you said such a sentence.
What to say instead? Well, that’s really impossible to say because it HUGELY depends on the context. Sometimes, something with weniger is idiomatic, sometimes German fast works. And sometimes you might need a completely different phrasing. My best advice here is to find an alternative phrasing in English and then try to translate that.
All right.
So now we know scheu and schüchtern, and those of you who are regular readers probably know what we’ll look at next… prefix versions.
Or related words, more broadly speaking. And there’s some nice stuff to be found.

For schüchtern, there’s actually only one real prefix version… the verb einschüchtern, which means to intimidate. Quite literal, if we think about it. ein is pretty much in and timid is the Latin based version another word for schüchtern.

I guess we should note that einschüchtern usually sounds like someone does it on purpose than intimidate does in English. So einschüchtern sounds like there’s an intent. Or at least, it’s done by a person. For example, if you want to say that German is intimidating, einschüchternd isn’t a good choice. In fact, there are NO results on Google for the phrase “Deutsch ist einschüchternd”.
I can’t give you a good translation though… I think people would phrase with something like respect or angst. Or in case of German kompliziert. Or maybe bedrohlich, if it is actually a bit threatening.

Anyway, the more productive word in terms of relatives is definitely scheu, and the first ones we have there are the nouns die Scheu and die Abscheu.
Scheu is pretty much what you’d expect, so it’s a mix between fear and shyness and while not super common, it is used in a few phrasings.

Die Abscheu on the other hand shifted away from fear and shyness toward one slightly different reason for avoidance… disgust, revulsion. And it’s the core of the adjective abscheulich and the verb verabscheuen, which is a distinguished sounding option for to despise, to detest.

Cool.
The next relative of scheu is the verb scheuen which is pretty much about the idea of shying away from something. Or more simply, to shun.
It’s not very common, though, and sounds quite “bookish”, so it’s only idiomatic in a few somewhat fixed phrases.

And last but not least, we have the verb scheuchen. Which is actually more common as one of the prefix versions verscheuchen or wegscheuchen, but the core idea of all three is basically what you want to do when you say

Like … to a raccoon on your porch or whatever. You want to chase it away by making it scared (which was the original sense of the shy-family).

And if you’ll ever read the Wizard of Oz in German, you’ll find that the Scarecrow in German is die Vogelscheuche…  because it scheuchs the Vogel.

And that’s pretty much it for today :).
This was our little look at the pronunciation nightmare that is schüchtern and its posse.
As usual, if you want to check how much you remember, you can take the little quiz I have prepared. And yes… there is a pronunciation portion in there.

And of course, if you have any questions or suggestions, just leave me a comment.
I hope you liked it and see you next time.

schüchtern – shy (for humans and pets)
die Schüchternheit – the shyness

einschüchtern – to intimidate (Implies intent or at least someone actively doing something. Not a good fit for a mountain.)
der Einschüchterungsversuch – the attempt at intimidation

die Scheu (vor)  – the timidness, the shyness (Only common in a few fixed phrases)
die Scheuklappen – the blinders, the blinkers (for horses)
die Abscheu (gegen) – the disgust, the revulsion
abscheulich – awful, repulsive
verabscheuen – to despise, to abhor

scheuen – the shy away from, to shun (Not common, except in fixed phrasings)