Word of the Day – “schlagen”

A fun look at the meaning of "schlagen" and its various prefix versions that range from making propositions to acne. A turbo boost for your vocabulary. 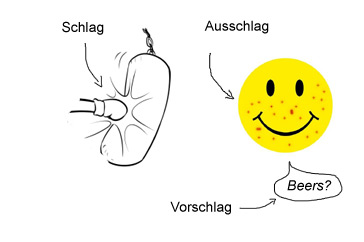 The main translation for it is  to beat. But that’s not all there is. Schlagen has some really nice prefix versions that take us to surprising contexts like reading books and choosing paths. And we’ll also discover that schlagen has awful lot to do with gender.
“Emanuel, that sounds kind of sexist.”
Well, I totally am sexist so that’s not a surpr… oh… oh wait… I meant sexiest. I’m a sexiest.
Gee, what a start… let’s jump right in.

So yeah, the number one meaning of schlagen is to beat and just like in English it works for actual punches as well as for the more figurative sense of besting someone, winning over someone.

There are lots of really nice and useful compounds around the idea.

And then there are of course like a gazillion prefix versions that basically tell us more specifics about how exactly something is being beaten.

Holy shit… what is wrong with that woman. So violent. And… oh my God, she keeps going…

Maria STOP! The poor book. It did you no harm. Leave it alone!!
Oh… wait, she actually just opened it. That’s what the sentence actually means. Because… there’s actually more to schlagen than just punching.

So yeah, aufschlagen is used for cracking up eggs and whipping up cream, but it also means  to open in context of books, magazines or chapters. And maybe you have a guess what the opposite is… it is zuschlagen. Oh, and then there’s also nachschlagen, which is a not so common alternative for nachgucken  in sense of looking for something in a book.

Now, the old Germanic warriors were not only avid readers (according to these sales stats on Amazon.germ) , they were also rough and tough so maybe they really did open and close their books in a very manly way and we’re still right on track with the punching-schlagen.  But aufschlagen and zuschlagen are not the only prefix versions with weird, off-beat meanings.
The most famous one is probably vorschlagen, which means to propose (we’ve talked about it in a separate article, link below :). That’s still pretty clear once you realize that it’s basically the same as propose, except that in German you don’t just pose something pro… you smash.
But what about abschlagen? We saw that earlier when Maria hacked off that horn, but it’s also a colloquial word for to turn down in context of little requests.

Or let’s take ausschlagen. One of the meanings is the kicking out of horses, another is for the fingers of a gauge going to extreme values. So far so good. But trees also do it in spring because auschlagen means to sprout (for trees). And while this is pretty much useless, humans have their own kind of sprouting called der Ausschlag… it’s just not as pretty as what the trees do because Ausschlag is acne.

Now, we could think of that as pus “punching” its way outward. Pretty gross, but we’d still have a connection to punching.
But then, there’s also  umschlagen.
And this one is NOT about knocking something or someone over. Instead, it is a technical term in economics for turning over goods (in a harbor for example). AND it’s also used in sense of to (suddenly) change for weather.

Oh and let’s not forget about the noun der Umschlag, which is the German word for envelop.

I have a black belt (with pink dots) in mind yoga but I really can’t come up with some wacky connection to the idea of punching.
If you look at all the verbs we had in this section, it makes way more sense to think of a second core idea. And that idea is … drumroll please… turning.
Think about it… aufschlagen and zuschlagen a books means turning pages.  Vorschlagen makes quite a lot of sense as turning an idea forward, an Umschlag is “turned” around the content. And when we have Ausschlag, the skin turns outward.
But the clearest example is einschlagen.
Yes, we had it earlier when Maria went on her rampage, but besides smashing in, it also used for… get ready… choosing paths and directions. Which is basically turning.

And this (vague) notion of turning doesn’t only help with the prefix versions, it also helps with one use of the stand alone schlagen, which is admittedly rare but super super weird.

Based on what we’ve learned so far, this sentence sounds like Maria punches her dad more than she punches her mom. And it can mean that… I mean… we’ve seen what a savage Maria is. But what people would normally understand is that she’s more similar to her dad:

She leans, or “turns” more toward her dad personality-wise. And also the noun Schlag can carry that idea.

And brings us to the connection with gender, or biological sex. The German word for that is das Geschlecht. Looks like it is related to schlecht but it’s actually an off-spring of schlagen. And it’s based on exactly that notion of “leaning, going into a direction” . Originally, Geschlecht was referring to your tribe or your family and was in line with the Latin genus (which comes from a root that’s about origin). And then later, it shifted toward making the distinction between the basic two sides male and female.

So… we’ve seen that schlagen isn’t only about punching, hitting but that there’s also a notion of turning in it. And now the question is why. How did these two meanings get in there? Do they connect in any way?
And the answer is … I don’t know :). Together with the German word die Schlacht (the fierce battle) and the English slaughter and slay,  it comes from the super ancient Indo-European root *slak which was about punching, hammering. And that notion of turning, going toward one side was just kind of there at some point in the German word. So you can just make up your own connection, and share it in the comments – the crazier the better :).
Cool.
Now, there’s actually lots more we could mention about schlagen, like several niche uses, more prefix versions and loads and loads or nice nouns and compounds, not least of them the infamous German Schlager, the worst thing in music since The Beatles.
Ohhhhhhhhhh…. that’s right.
But I think we’ve already done enough for one day and more would be a bit overwhelming. I added quite a bit to the vocabulary list below, so you can check that out if you want, and we can talk about all the other schlagen-words and uses you come across in the comments.
I’m out for now, I hope you guys had a fun time and learned a bit and I’ll see you nächste Woche :)
Bis dann.

The way Maria was portrayed in this article was fiction. In reality, she is a very loving person with a very kind heart and incredibly sexy hair.

schlagartig – suddenly
schlagfertig – quick to come up with a witty response, quick witted

abschlagen – turn down (for little requests), hack off

der Anschlag – the terror attack
angeschlagen – a little under the weather, slightly sick


aufschlagen – open (for books and magazines), crack open (for eggs), whip (for cream)
der Aufschlag – the service (in tennis)

einschlagen – punch in, take a turn (in combination with direction)
der Einschlag – the impact (of a meteorite)

der Nachschlag – the second serving (mostly for food, but also used in a figurative sense)

umschlagen – change (only for weather), something boring with trade
der Umschlag – the envelope

vorschlagen – to suggest, to propose
der Vorschlag – the suggestion

zuschlagen – punch (used when we don’t specify a target), colloquial for taking an opportunity, close (for books)
der Zuschlag – the addition (mostly for costs)