A fun look at the two meanings of "Schild" and its two genders and plurals. 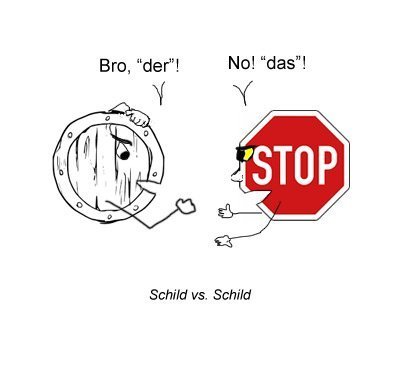 and welcome to our German Word of the Day, this time with a quick look at the meaning of

It’s not the most useful word ever, nor is it hard to make sense of. But what it does bring to the table is not only two genders, but also two plural forms. Yeay. Every learner’s wet dream. Wet from tears!
So let’s dive right in, shall we..

So there’s das Schild and der Schild, and the two have distinct meanings.

The first sentence is about what Cpt. America does when he’s fighting evil space aliens. He throws his shield.
The second sentence on the other hand is about what happened in summer last year. Steve Rogers (Cpt. A.) was at the Friday’s for Future protest and then Tony Stark drove by with his big SUV. And Steve was like “You’re destroying the planet, Tony!” And Tony was just like “Well, at least I’m having fun. I’ll save it later.” And he revved the engine.
And Steve was just like “Get out of here!” and hurled his little self made “Skolstrejk för klimatet” sign at Tony’s car.
Tony was like “What the… I hope you have insurance, Cap.” and Steve was like… but let’s get back to our topic actually.
So yeah… der Schild means shield and das Schild means sign. But ONLY sign in the sense of a board with information on it. Any other sign is das Zeichen.
Because of course the two Schilds in German are related.
The origin is the marvelously (get it?) ancient Indo-European root *skel- which was about cutting, carving and the original meaning shield was something like “piece cut from wood“. For a long time, the main users of those “shields” were knights and soldiers but those would often bear the sigil or the the army or something. So they had an “informative” component. Soon people started making similar looking signs for their taverns and craftsmen stores and this “informative shield” turned neuter and got a new plural while the “protective shield” remained masculine.

That’s true, by the way. I was in driving school recently, and they showed us a short clip of 30 seconds of someone driving along a main road in a small German town and we had to count the traffic signs. No one saw all of them and there were over 50. And here’s an even more extreme example… in Lübeck, a German city, they put up 161 signs within 400 meters …

They put up no parking signs for every single parking pocket along that street because they were afraid of “misunderstandings”. So yeah, Schilderwald is a really good word for that.
And in general, the informative Schild is BY FAR more common. And in fact, some people write das Schutzschild even though it’s a protective one. Officially, it’s der, but das Schutzschild doesn’t sound wrong to me either. Die Schutzschilder does sound wrong though… a nice example for how language changes and that what is right ultimately comes down to what feels right which in turn is shaped by what you hear most often.
Cool.
Now, we’ve already seen a few Schild-compounds but there’s two more we need to mention: die Schildkröte and die Schilddrüse. Schildkröte literally means shield toad and it’s the German name for turtle.
And Schilddrüse is the German word for thyroid, which is this little organ in our throat that produces a bunch of really important hormones. Die Drüse is the German word for gland in general and the Schilddrüse is called that way because it looks a bit like a shield. And that’s actually kind of a direct translation of the ancient Greek ancestor of thyroid which meant “doorshaped shield”.
Damn… I feel so chatty today, I hope you don’t mind :).
Anyway, besides the compound nouns there’s also the verb schildern, and that one is kind of interesting. Its prefix version ausschildern is literally about putting up signs to guide the way.

But schildern by itself has shifted a little and became a translation for to describe. It still has this information component, but it’s not about signs in any way anymore.

Schildern sounds a bit official, though, and only works for events or processes. Not so much for objects. Generally, the word beschreiben is MUCH more common as to describe and I’d say you can put schildern to your passive vocabulary.
Cool.
Now, some of you might be wondering about the verb to shield. But that’s actually NOT translated with Schild. One option is abschirmen, which is based on the noun der Schirm. But we’ll just take a look at that one some other time :).
For today, we’ve done enough. This was our look at the meaning of Schild with its two genders and plurals. As usual, if you want to check how much you remember, you can take the little test we have prepared.
And of course, if you have any questions or suggestions, just leave me a comment.
I hope you liked it, have a great week und bis zum nächsten Mal :)

schildern – describe (events)
die Schilderung – the description (for an event)