Word of the Day – “schieben”

A fun look at the meaning of "schieben" and what delaying has to do with a drawer and deportations. 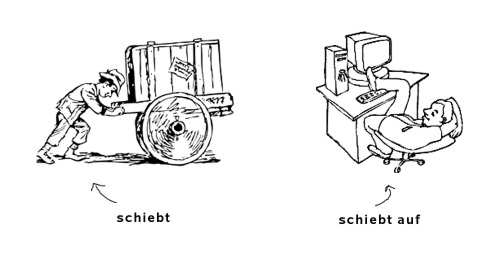 and welcome to our German Word of the Day. This time we’ll have a look at another random, boring verb that you’ll never use and its super lame cousins.
On the edge of your seat yet? Perfect :) . Then let’s dive right in and talk about

Schieben is related to the English word to shove. They both come from the same root as words like shoot, shut, shun, scootor shuttle: the mega turbo uber kind of ancient root *skeub-which meant as much as making something move quickly by applying a force from behind. So … it’s kind of what I do with the interns, when I kick their lazy ass for being on Facebook all day. Hmmm… I wonder if the Indo-Europeans had lazy interns too. Like… some Intern-Europeans… meh, anyways.
Seriously though… the core of the root was probably just broad idea of to (make) move quickly. But this whole notion of a pushing force (as opposed to pulling) was definitely in there very early on and it’s totally part of words like shove or shoot.
So… making move by pushing force. And that it is pretty much the core meaning of schieben.However, shoving is rather quick and abrupt, schieben on the other hand… not so much.
Schieben is slooooow. A slow and steady moving of an object across a surface. The sound of the words actually kind of mirrors it. Shove is short and snappy. You wouldn’t really say “shoooooove”. Schiebenon the other hand is perfect for that. Schieeeeeeeben. That could totally be the sound you’re making when you’re “schieben”-ing something heavy. Like… pushing a car that won’t start. That is what schieben is, that’s the vibe it has, even though it doesn’t always have to be a heavy object. I can also schieben a book across the table, or a glass of whisky, or a coin. What matters is that it’s slow and steady and the object touches the ground. I think the closest translation is to pushbut pushing is much broader and whenever it gets a little more dynamic or sudden, schieben is not gonna be the right word anymore. Like…. for actual pushing as in pushing someone you’d say schubsen, and in many other situations it would be drücken.
But anyway… I think it’s time for some schieben-examples.

These were about actually moving something but there’s also a very common abstract use of schieben, which is especially useful if you have to pass blame a lot.

The last example is a common idiom which was probably coined because tavern thieves would put their pickings in someone else’s shoes when the city ward made a sweep.
Now, there are also a bunch of compound nouns like Schiebedach (moon roof, sliding roof) or Schiebetür (sliding door) but the real power of schieben lies…big shock.. in its prefix versions. So let’s take a look at some of them.
First, there is anschieben, which is basically schieben with a focus on the start, of setting something in motion. You could anschieben a car but also projects or political reforms. Of course, there are other options to say this like beginnen or initiieren but schieben makes it sounds little weightier and slooooow.

And it’s about time someone did. Because the stupid, old manager kept procrastinating about these reforms… which brings us right to the next word: aufschieben. The idea is simple… just think of a snow plow shoving snow up to a huge pile. Only that aufschieben is not about snow… it’s about work.

Of course Aufschieberitisis not a real clinical term, but the word just perfectly describes the condition and so even if it’s completely made up it’s used a lot even by newspapers (for some examples look here) .
Now we should mention that the German aufschieben is not always negative. In official texts it can also have the neutral meaning of to delay. An aufschiebende Bedingung is the official term for condition precedent (whatever that is) and there’s also the very common expression.

The German version gets used whenever you have to postpone something that you were actually looking forward to…. like having a girls’ night or watching “Shades of Grey” with your partner. Ahem.
Anyway, postponing stuff brings us right to the next schieben-word which is probably the most useful… verschieben. The ver- basically brings in its idea of change of location and the schieben itself is used in a very broad sense of moving. You can verschieben a fridge but also files on a computer and most important of all verschiebenis the number one word for moving all kinds of appointments or dates.

Now, of course I didn’t put the files into this folder because I want to sort them. I’ll aufschieben that until the computer breaks down. I put them in there because I want them gone. I want a clean, nice looking desktop. And that kind of brings us to the last schieben-verb and get ready for what is probably one of the most callous, cold words of the German language: abschieben. Schieben with some idea of ab to it… how bad could it possibly be? Well, the main meaning of abschieben is to deport. Deporting someone isn’t a nice thing to begin with but calling it abschieben… I don’t know. Like… brushing the snow from the windshield or a bunch of bred crumbs from the table going like “Ewww”. It just sounds super cold.

And even if it’s not to deport, abschieben is about getting rid of persons.

So that’s abschieben and especially in context of deportation, I really don’t like it.
Now, there are a few other verbs like einschieben, wegschieben or zuschieben but I think you’ll always get them from context.
Before we wrap this up though, there’s one more word to talk about… the noun. The verb itself is schieben, the ge-form is geschoben and the noun is… der Schub.

The word Schub has a whole bunch of meanings. For one thing it the physical term for the energy or force that causes a movement. Schub(kraft), thrust in English, is what makes planes fly and rockets lift off.
But Schub is also used in daily life a lot in sense of boost,rush or surge, so unlike schieben, it has actually preserved the original notion of a quick and sudden movement.

There are plenty of compounds with this Schub like Adrenalinschub (rush of adrenaline) , Müdigkeitsschub (surge of fatigue), Fieberschub (fever attack or a hot stage). And of course Schubis also the base for the nouns made from many prefix versions.

The only prefix-version that does not use this is verschieben. There, the noun is die Verschiebung.
Anyway, there are a few other Schub-words out there. If you pass a construction site you might see aSchubkarreand if you’re buying a blue ray box set of your favorite show it’ll probably come in a Schuber. And last but not least there’s the very important word die Schublade, literally slow-push-load, which is… a drawer. So … in English, it’s named after the way it is opened, in German it’s based on how it is closed, a fact that is very telling for the different mentalities of English speakers and German because the German speakers tend to put things in their drawers and then close them while .. uhm… English speakers have a penchant for opening their drawers and whipping out thi.. gee, who wrote this nonsense. I… uhm… the interns … yeah… these stupid interns and their crappy scripts… stop making stuff up, you hear me!!
Anyway, I think that’s it. We’re done. This was our German Word of the Day schieben. It’s related to shoot and shove but while those have preserved the original notion of a sudden, quick movement, schieben has grown more relaxed over the years and now it is a slow and steady pushing of something. Especially the prefix-versions and the noun Schub are super common in daily conversation and I’m sure you’ll come across many examples.
As always, if you have any questions or suggestions or if you want to try out some sentences just leave me a comment.
I hope you liked it and see you next time.

Vocab (including some new):

schieben – slowly, steadily push/shove
aufschieben – to procrastinate/official: to delay
abschieben – to deport
verschieben- move to a different location/ reschedule something
der Schub – the thust, surge, rush
die Schublade – the drawer (lit. the shove-load)
etwas auf jemanden schieben – passing the blame for something onto someone
die Schiebetür – the sliding door
der Zahlungsaufschub – the respite
ein Projekt anschieben – get a project going (figurative)
der Schieberegler – the slider (on a mixer)
die Verschiebung – the postponement