Word of the Day – “schätzen”

Schatz means treasure. Schätzen means to estimate. Today, we'll find out why and go over the various useful prefix verbs of "schätzen". 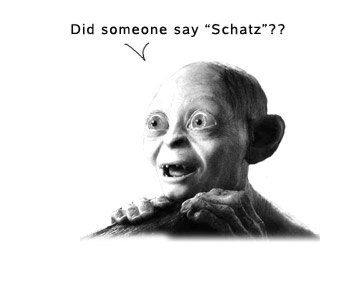 and welcome to our German word of the Day. This time we’ll have a look at the meaning of

We’ll look at the verb itself, the most common related words, the prefix version and we’ll also learn something interesting… uh… I mean something else. The crazy career of Schatz and how it changed from a word for your goat to a word for your lover.
Sounds good? Then let’s jump right in. Oh and speaking of sound… there’s a super special surprise waiting for you.

Schatz – from cattle to honey

Schätzen comes from the noun der Schatz,which some of you might know as sweetheart. Schatz comes from the Germanic root *skatta. Nobody knows where that came from, and it doesn’t have any relatives in modern English. What’s interesting about it is the meaning. Or better, the evolution of it.
The original meaning of the root was cattle, livestock; from there it gradually shifted toward possessions, money. That connection makes sense I think, and the fascinating thing is that Schatz isn’t the only example for it.
Do you have any idea where the word cattle comes from? I was super surprised to find out that it is related to capital. Cattle – cap’tal. They’re really just a mumble apart.
And back in the day cattlesimply meant possession. Or take the word fee. Fees don’t exactly contribute to our personal wealth but they do have something to do with money. Now, German has a word that sounds exactly like fee: das Vieh. And Vieh is the word for cattle, livestock. But there’s more. Fee and Vieh are both related to the Latin word pecu which meant cattle and which is the base for the Latin pecunia which meant … money. That’s where pecuniary and peculiarcome from, by the way (if something is peculiar to you, you kind of “own” it).
Anyway, back to Schatz. So, at first, it meant livestock, then it changed to possession, money and from there it was but a small step to the meaning it has today… treasure. It can be used for the old school “pile of gold”-treasure, but more importantly it is the number 1 term of endearment

Oh and let’s not forget the wonderful word der Wortschatz, you’ve probably heard it. Wortschatzmeans vocabulary in sense of the whole of words a person can use or understand.

So, that’s Schatz. From cattle to money to treasure to honey. Hey, that rhymes :). Now it’s time to get to our actual word... schätzen.

We can think of Schatz as “thing of value”. Sounds abstract but it is cool because it fits the older meanings as well as the current one AND it is the perfect key to the verb: the prime meaning of schätzen is assessing/gauging the value of a thing.
And it’s not limited to the context of money. It works for ANY kind of value. You can schätzen the value or price of something but you can also schätzen the temperature, the size of your sweetheart, or the time it’ll take her to forgive you for buying a 14 instead of a 10.
So you’ve probably figured it out by now: schätzen means to estimate.

And it’s not limited to quantities. It also works for making statements about reality when you want to express that you’re not really certain. People often use it in sense of to guess or to think.

And of course there are also some common related words so let’s look at some examples for those, too.

Cool. Now, assessing the value of something actually isn’t the only meaning of schätzen. It also works for valuing the thing. Kind of like to estimate and to esteem combined in one word.

If you’re now like “Hey, so schätzen is an alternative for mögen, right?” then I’d say kind of. They’re both used as to like but schätzen sounds much more formal, unemotional even. You wouldn’t use it for stuff you really like, like your loved ones, your favorite movie, that one song or prefix versions of German verbs. Because we all love those, right? Right? Riiiiiiight?
Okay, we don’t. But they’re good for our Wortschatz so let’s take a look.

Schätzen doesn’t have crazy prefix versions in that the original meaning is still completely visible. Not like some other verbs… yes, I’m looking at you “befehlen”. From missing to commanding… puhleeze.
Anyway, the first two common ones are überschätzenand unterschätzen and ich schätze mal you get what those mean :)

The next two are einschätzenand abschätzen and those are somewhat tricky because they’re very similar. Don’t ask me why, but the ab adds a certain vibe of future. You’d use abschätzen for rough estimates about the future, not so much for estimating the height of a building. Though that wouldn’t be totally strange either.
Einschätzen has kind of a personal feel to it and it has the least focus on numbers. It’s often used in context of assessing people, how they are, what they’ll do. But it also works in sense of judging a situation or a performance.

I hope that I could at least give you some idea of the different vibe. Both, einschätzen and abschätzen are either used as a stand alone or in combination with questions like who, what, why or how. They do not work well for statements about reality.

But hey…. please please don’t stress over these things too much. This is nothing you need to remember. Just go ahead and start using the verbs in some way. And if you make a mistake, that’s fine. That’s great. It’s part of learning a language. And it’s part of estimating which brings us to the last word for today: sichverschätzen. Schätzen is to estimate. The ver-adds the notion of wrong. And because that alone would make way too much sense, you also need a completely illogical self reference (which is part of so many verbs with the wrong-ver).

Yeah, that self reference really makes no sense.
I hope the rest did though. This was our Word of the Day schätzen. The base is the noun Schatz which changed from livestock to valuable item to treasure to honey and the verb schätzen itself is about estimating, gauging, appraising as well as valuing, liking.
If you want even more words for your Wortschatz, check out the vocab and, as always, if you have any questions or suggestions just leave me a comment. I hope you liked it and see you next time.

schätzen – estimate, value, hold in high regard
die Schätzung – the estimate
schätzungsweise– round about, approximately
unschätzbar – invaluably (mostly as an adverb)

abschätzen– gauge (rough, often used to talk about the future)
abschätzig – dismissive
(this has nothing to do with the other abschätzen. It’s based on the idea of “valuing downward” which isn’t used anymore today)

This entry was posted in German Prefix Verbs, Verbs, What is the Difference. Bookmark the permalink.
Subscribe
47 Comments
Oldest
Newest
Inline Feedbacks
View all comments