The family of "Rüstung" covers a surprisingly large and diverse range of contexts: from war, to gear, to construction work and even ... playgrounds. 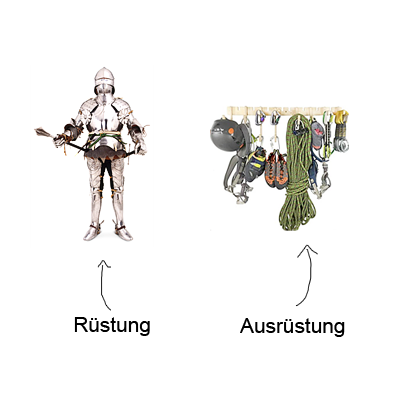 and welcome to our German Word of the Day, this time with a nice, quick look at the meaning of

Looks German, but it also looks vaguely familiar. Like, if were to see it in a book and we had no dictionary nearby, we could well venture a guess.
First, we remove the eyeliner (aka. umlaut) we’d get Rustung.
And if we then replace -ung with -ing, because despite all their differences the two endings are somewhat related, we’d get rusting. My bike’s favorite pastime.
So… did we hit jackpot? Is it the right meaning?
Absolutely not, of course.
Rusting is totally NOT what Rüstung means.

But in a weird way rusting does kind of relate to Rüstung and it can be a really nice mnemonic.
Because at least the most iconic type of Rüstung, the one that the knights used to wear in medieval times – that was prone to some serious rusting ;).

You might have guessed it – die Rüstung is the German word for armor.

Now, back a few hundred years, Rüstung was indeed mostly used for the stuff you wear to protect your body in battle.
But with the advent of modern warfare, the word shifted a bit and took on a more general sense of armament and it’s even used in the same sense as arms.

It’s important to note, though, that this ONLY works in these formal, very generic contexts.
So you can’t use the word Rüstung for a specific set of weapons. The word there would be Waffe(n) and using Rüstung would be really confusing because the first association in most people’s minds is probably still the knight in shining armor.
Or rusting armor. That was more likely probably :).

Cool.
So now we know what Rüstung means, but what makes the word really interesting is of course its family.

The family of “Rüstung”

The origin is the disappointingly ancient Indo-European root *krā(u)- which was about layering, covering.
And the only English members of this family I could find (and I actually had to dig a little for this one) are the words around crypt.
Like cryptic, which has focused in the idea of hidden, secret. Or crypto which has recently shifted its focus back toward the idea of
working at McDonalds. 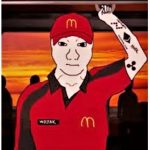 Seriously though, the German verb rüsten , before focusing on putting on layers of metal as armor, had a more general sense of equipping, to get ready. So it could also be about putting on layers of festive clothing for a celebration, for example.
And this broader idea of getting ready is actually still alive in sich (Accusative) rüsten which is about getting ready for some kind of challenge, be it emotionally or with some equipment.

Of course we could also used vorbereiten here. sich rüsten just sounds a little more like it’s a challenge you’re about to face.
Overall, rüsten itself is pretty rare, but its prefix versions are fairly common.

The prefix versions of “rüsten”

And the first one, ausrüsten, or ausrüsten mit, is pretty similar to what we just had because it pretty much means to equip (with).
And it works for people and their gear, but also for objects that are equipped with something.

Next up, we have umrüsten, which is about retooling or converting something to fit a different purpose than the original.

Cool.
Now, all the prefix versions we had so far were pretty straight forward. So they were either about the more general sense of getting ready, gearing up or they were directly related to military.

But there is one that doesn’t really seem to fit in – sich entrüsten.
Back in medieval times, this could simply mean taking of one’s armor, or literally: “to de-armor oneself”. So that makes perfect sense.
Today however, sich entrüsten actually mean to get angry, to get outraged, to throw a tantrum. Which seems totally counterintuitive, because… I mean… if you’re getting angry and ready to fight, wouldn’t you want to put ON the armor instead of taking it off?

But remember… the original core idea of the family was just putting on layers and it could be layers of festive clothing, too.
And entrüsten got the meaning it has from the figurative idea of “bursting out of your clothes with rage” – just think of the Hulk, for a visual image.

The word does sound a little old fashioned and “high brow” though. Like… think of a politician in parliament who is showing outrage, just so everyone sees just how outraged he or she is. That’s the vibe of entrüsten.
You won’t see it much as a verb in daily life, but you might see the adjective entrüstet or the noun Entrüstung.

And then, last but not least, we have the noun das Gerüst, which is the German word for… you’ll never guess it…  scaffolding.
Seems random, I know. But if you think about it… a scaffolding is kind of like an extra layer put onto a building. And it’s also kind of equipment you need to work on the house. So it actually ties in.
The main use of Gerüst is definitely in construction, but you can also find it in a few figurative contexts, and you can find it on childrens’ playgrounds.

And that’s it for today!
Hooray!
This was our look at the meaning of die Rüstung and its family and the key “associations” are knights, defense, equipment and layering.
That’s the cloud of themes we have in that family :).
As usual, if you want to recap, just take the little quiz I have prepared for you.
And if you have any questions or suggestions, just leave me a comment.
I hope you had a good time, have a great week and I’ll see you next time.