A quick look at the meaning of "rühren" and what stirring your coffee has to do with emotions. 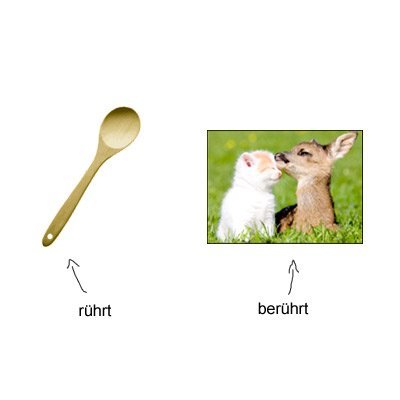 and welcome to our German Word of the Day. This time, with a quick summer look at the meaning of

The origin is the exceedingly ancient Indo-European root *k̑erə-. The core idea of this root was “mixing together” with one of the main contexts being the mixing of ingredients of food. Mammoth stew with wild forest mushrooms for instance… hmmmmm. That was a good dish, I can tell you that.
A lot has changed since then. Mammoths emigrated to space, we put a man on a moon and we talk to our computer. But one of the things that hasn’t changed is, we still eat. And rühren is still what we do, if we want to mix it.

I think, you guessed it by now… rühren is the act of moving a spoon in circles through multicomponent food with the goal of mixing it.
Or in one word to stir.

And since German likes to be really precise, it is no surprise that there’s a whole bunch of prefix versions of rühren, that all specify the stirring in ways that an English speaker would never want to know.

And if you think those are not that bad, well… I challenge you to look up unterheben and unterziehen (in the context of cooking) and then tell me what the difference is and how they are different to einrühren.
Seriously, you can find a LOT of verbs in a German cookbook.

Now, of course we wouldn’t be talking about rühren if it was just about cooking.
But there’s more to it, as this common idiom shows…

This is not about her stirring with fingers or something. It’s about her being a lazy slouch because it means that she is not moving a finger….

And it’s not only this idiom, where we see this sense of moving.
It’s actually the core of the phrase sich rühren, which means to move oneself … in the sense of being still and then making a movement.

And just like to move we can also find rühren used in the more figurative sense of stirring up emotions, not the verb directly, but related words.

And the second example introduces the third really important idea… the idea of touching. And that’s the core of the verbs anrühren and berühren, which both mean to touch.
Anrühren only talks about physical touch by a person and it often implies some kind of usage or “harm”.

Berühren is definitely the more useful one, and it works in both senses – emotional and physical.

The last example is actually lyrics of a German song about Harvey Weinstein and the MeToo movement… or was it friends becoming lovers after years?! Not sure, actually.
Anyway, some of you might be wondering if there is a difference between berühren and anfassen, which also means to touch. And yes, there is.
Berühren generally is gentle. It’s the first moment of contact if you will. Grabbing someone’s butt for example would be too strong for berühren. Anfassen can be gentle, too, but it doesn’t have the same gentle tone of berühren.

Berühren would sound a little bit too sensual in these examples.
But there’s a second difference. Even though it has this sensual tone when people do it, berühren is also to touch in the purely spatial sense, and it can between things. Like… the sour cream and the open can of beans in the fridge can berühren each other, in anticipation of the tacos to come.
Anfassen on the other hand can pretty much ONLY be done by humans. So if the sour cream in the fridge were to anfassen the can of beans, that would raise some serious questions about how old this sour cream is, whether it is sentient and most importantly how it got arms.

And I think with the image of sour cream with arms, we’ll end this article :).
This was our look at rührenand how it connects a stirring a stew with emotions.
As usual, I recommend you take the little quiz we have prepared to check what you remember.
And of course, if you have any questions or suggestions, just leave me a comment.
I hope you liked it and see you next time.

Oh by the way… here’s a link to an old German schlager with berühren :)