Vocabulary trainers often group their stuff by categories. Well, here's one of mine: word for rotten food and the effect it can have on us when we eat it :) 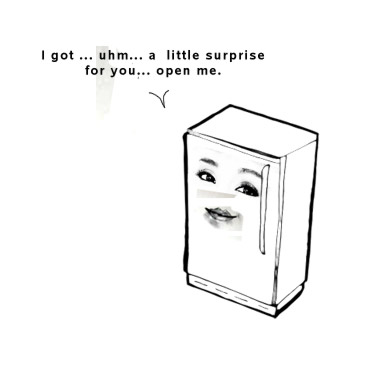 and welcome to our German Word of the Day…. well, actually it’s German Words of the day because it is time for another style special. And after we’ve talked about walking, facial expressions and noise, this time it’s gonna be all about

Now you’re like “Really? Fridges?!”. And I’m like “Yeah, fridges!”
Because they’re the coolest home appliances ever…. get it? Get it? It’s funny because cool can mean cold and awes… meh anyways, so today we’ll look at fridges or better we’ll take a look inside fridges. And in case you’re worried that this going to be some boring list of stuff that can be in the fridge – worry no more. We’ll look deep inside the fridge at the stuff in the rear. That black, wrinkly banana, that forsaken piece of brie, that thriving culture in the half eaten yogurt. You’ve probably figured it out by now… today, we’ll look at all the words you need to describe such treasures. And we’ll learn the vocab for what happens if we eat it.
So… are you ready to take a mouthful of rotten food? The words for it anyway?
Cool. Then let’s start with one of those awesome compounds.

Mindesthaltbarkeitsdatumis short for Lebensmittelmindesthaltbarkeitsindikationsda… okay, I’m kidding. It’s not short for anything and it’s often shortened to MHD. Literally translated Mindesthaltbarkeitsdatum is minimum “lastability” date and I think the proper counterpart in English is the best-by date. Many people kind of think of this date as a built in self destruct. Like… at midnight the yogurt that was all good until then suddenly turns toxic. But that’s not what the date is about. The MDH is the date until which the manufacturer of the product guarantees you a certain taste, texture. and quality. So … let’s say you buy salt, you can’t go to the company a decade later being like “There’s not less iodine in your iodized salt than it says on a package. You frauds.” Most stuff is still edible way beyond the MHD. And the ones that really go bad and turn harmful quickly, like fresh fish, ground beef or raw chicken, these do not have an Mindestsomethingsomething. Their date is called Verfallsdatum, literally fall-away date, and you should NOT eat it after that. I think it translates to expiration datebut I’m not sure. Anyway, on the packages they usually don’t use the rather long nouns but verbs instead:

All right. Now let’s look at the verb that is about passing these dates.

Ablaufenhas quite a few meanings but one important core is the notion of time passing, time running out. That’s how it came to mean to expire.

The web really is full with these kind of questions. And I’m like that, too.

If you told me that I would be like “Ewww…” and my coffee would have this weird after taste all of a sudden and I’d feel nauseous. Well, okay… this is a bit exaggerated of course but abgelaufen definitely has this negative ring to it and even if it doesn’t mean to go bad, it sounds a bit like it.
And that brings us right to the next word… or words.

Literally, to go bad would be schlecht gehen but absolutely nobody would understand that. In German it’s doesn’t go bad… it becomes bad.

The result of schlecht werden, gone bad, is… just schlecht. But this is a little tricky actually, because just like the English bad, schlecht can also be a general term for… well.. just not good.

It’s totally up to context which one it is and that might be a reason why in many situations people use nicht gutcombined with a marker of passing time to express gone bad.

I guess we should also mention verderben, which can also mean to go bad, to spoil.

In this sense it is only used in more formal contexts but verderbenitself is still good to know because it’s also used in sense of spoiling appetite. Which is exactly what we’ll do now … we’ll get specific.

One of the most common signs of food gone bad is Schimmel which is basically THIS …. oh… wait… I meant more like THIS.
Now, this is actually not one of my usual, failed jokes. Schimmelreally can be a white elegant horseand gross mold. And it’s not even two words that are just spelled the same by coincidence. It’s really one word… Schimmel. Schimmelis quite closely related to shimmer and distantly related to shine and they all come from a root that was about pretty much that…. to shine, to gleam, to glimmer. A while the word der Schimmeris still about that, Schimmel specialized on the white fur of a horse or the white fur of a strawberry and the verb schimmeln turned from being white and gleamy to to mold. Kind of funny to think of it in it’s old meaning actually :). The strawberry “shimmers”.
Anyway, there’s also verschimmeln, which sounds more complete than just schimmelnand the adjective schimmelig which means moldy.

All right. Now let’s take a look at what’s going on under the surface layer of mold. The real rotting.

Faulen is related to the English foul and already their mega ancient Indo-European root *puhad the meaning it has today…. to rot, to decay. Gammeln is based on an old Germanic word that simply meant old but today it means pretty much the same as faulen. Bacteria and other microorganisms having the time of their lives in that apple or that steak. Just like with schimmeln, there is also a ver-version of the verbs which just sounds more complete. And there is also an adjective with –ig.

I think that faulenmight be a bit more serious. And it’s more broad and it also works for wood or carcasses. (Ver)gammeln is pretty much limited to food. And I feel like verfault is more for fruits and veggies while vergammelt is for meat. For instance, the term Gammelfleisch has become pretty much the unofficial word for old, slightly rotten meat that is put on sale.
But other than that they are really very similar. They actually both have a side meaning that kind of matches. Rumgammeln is a colloquial term for hanging around doing nothing and faul, well faulis the official German word for lazy (for more check this article about Faulpelz).

All right. So schimmeln, gammeln and faulen are the most important words when it comes to rotten food. But there are some other ones that are specific to certain kinds of food, so let’s look at these too.

some more ways to go bad

The first one is used for milk and in German the standard word for that is sauer .

This term is a leftover from back in the day, when everything was better. People would have their milk go sour on purpose to create all kinds of cool milk products like Quark or yogurt. This sour milk wasn’t as tasty as regular milk but it was totally drinkable. Today milk actually doesn’t really turn sour anymore… it just goes bad and you shouldn’t drink it because it’s just random air bacteria that messes up the milk, not the awesome lactic acid bacteria. That gets killed during pasteurization.
But anyway, what happens to milk can also happen to fruit juices and this is called (ver)gären. (Ver)gären is actually the German term for to fermentand it’s not automatically bad. Actually, gärenis awesome because it’s a key step of making beer and wine. But if your orange juice tastes oddly sour and tingles on the tongue… well, it’s maybe time to throw it away.

Next up, there is ranzigwhich is the word for fat and oil going bad and it’s obviously the same as the English word rancid.

Ranzigis also sometimes used to describe locations. A bar can be ranzigfor example. And there’s also the rather colloquial verb anranzen which means to scold /to tell off.

The last, and possibly least harmful way of going bad is drying out. In German that’s called vertrocknen. And as the water goes out the apple gets more and more schrumpelig (shriveled, badly wrinkled) until it is completey verschrumpelt.
All right. So these are the ways of going bad. Now let’s see what happens if we eat it.

Usually our sense of smell and sight help us to avoid rotten food but sometimes we end up eating some anyway. Meet Thomas. After having had a demure soiree at the bar with some friends he came home and now he’s starving. He opens the fridge and there it is. Right there behind all that other stuff. That half eaten Chunegg Royal® (a sandwich with chicken tuna and egg) from … uhm… two days ago. Or was it two weeks? Meh, whatever. Still looks good and so down it goes into his tummy. Little does he know that it’s a Trojan sandwich. It has a payload and Thomas is the ones to pay.
It all starts with a slight nausea or in German die Übelkeit. Übel is one of the German words for bad. You can find it here and there and it’s especially common in context of being nauseous. .

Note that the phrasing used the same twisted logic as “I am cold”. You’re not saying that you are nauseous. You’re saying that it is nauseous to you.
All right. So Thomas is nauseous and his stomach will now just hurry up and see the visitors out… by making him throw up. German has 2 main words for to throw up: sich übergeben and kotzen. Sich übergeben is the formal version and it literally means to hand oneself over.

Kotzen, which is probably related to the English version of the sound of crows (to caw), is not formal.

But oddly enough die Kotze is the only word German has to offer for the vomit. Well, apart from the super high brow das Erbrochene which is based on the word brechen… which also means to vomit. But das Erbrochenegets adjective endings so Kotzeis much easier to handle.

All right. So Thomas is nauseous and he pukes. A lot.
Now, if were lucky he’d get it all out in time and just have a slightly upset stomach for a few days; which in German has the nice name Magenverstimmung (stomach disgruntlement). But lucky he is not. Next he gets Magenschmerzen (stomach pain) then Bauchschmerzen (tummy ache) that worsen to Bauchkrämpfe(cramps in the belly) and then something starts that is one of the most figurative words the German language has to offer… der Durchfall. Literally it is the fall through and the real meaning is… diarrhea… because… well, everything you put in on the top comes down at the bottom within the hour. Another, more vulgar term for that is Dünnschiss (thin shit) and there are many more I believe but Durchfallis really the standard and works in both, low and high register.
Thomas eventually decides to go see a doctor because he’s worried he might have a Lebensmittelvergiftung (food poisoning). But turns out he is okay and after a few days he’s back at full health and only the slight Übelkeithe gets when he sees the Chunegg Royal ad. And he lived happily without ever after….
Aaaaaaand… I think that’s it. That was our Style special on fridges which was actually a style special on rotten food and what it does to the body. As always, I hope you had a little fun and that one or the other word is going to stick. If you have any questions or suggestions or if I forgot a word from that field just leave me a comment.

I hope you liked it and see you next time. Guten Appetit :)