Word of the Day – “rechnen”

A fun look at the meaning of "rechnen" and the differences between all the various prefix versions. 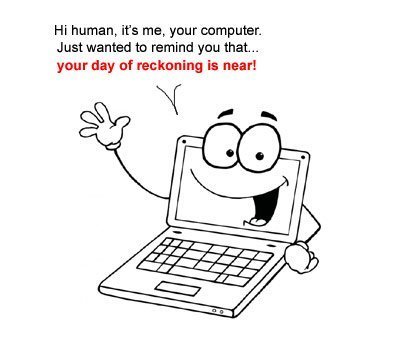 and welcome to our German Word of the Day. And you had better be ready, for the day of reckoning has come.
Dut dut dunnnnn.
Well, okay… actually it’s more the day of “mathening”. Because today, we’ll look at

Rechnen is the German brother of to reckon but unlike to reckon, which is mostly used figuratively, rechnen is still about making actual calculations with actual numbers.
Yeah… yawn.
But what’s even more yawn are the countless prefix versions of rechnen like (anrechnen, abrechnen, ausrechnen, vorrechnen,… ) which all give us information about how or why or where or at what temperature Fahrenheit a calculation is being made.

But at least if you’re planning on living in Germany for some time, it’s really good to have a rough idea about the rechnen-family because these words are all over the place and can get confusing. So let’s get bored together…

A quick look at where they come from first: rechnen and to reckon actually come from the jawdroppingly ancient Indo-European root *reg, the same root that right and recht are from. The core idea of the family was simply a straight line, and the original idea of rechnen and reckon was a rather broad sense of setting the record straight.
And at some point this notion of computation came in but English preferred to compute and calculate for the number stuff. No surprise there, because English is HUUGE fan boy of Latin. Yup, calling you out, English. I bet when you were a teenager, you had a room full of posters of Latin. Latin looking pensive, Latin on a Skateboard, Latin shirtless, showing abdominals.
But German, too, is a fan boy – a fan boy of words that sounds like something is stuck in your throat. So it is no surprise that rechnen REALLY took off and became the standard verb for doing calculations – both, in a sense of actually doing math and in a figurative sense of expecting a result based on what you know.

The last one is probably the closest rechnen and to reckon come. You definitely DON’T use rechnen as that idiomatic “I reckon” that you can find in English (is that an American thing, by the way, or do Brits also reckon stuff)? The best German translation I can think of is annehmen (to suppose).

You might also be wondering about the noun reckoning. Well, we’ll see what that is later, but it’s definitely NOT die Rechnung. Rechnung is actually a pretty important word, because not only can be a general calculation, it’s also the German word for an invoice AND for the bill in a restaurant (sounds a bit fancy, so not to be used in a bar).

Oh and while we’re at nouns let’s also mention der Rechner which is the German word for a computer, either desktop or laptop…. NOT tablet.

Cool.
So this was the first impression of rechnen versions and what exactly they mean.
Yeay!
Are you pumped?!
I can’t hear you! ARE YOU PU… okay, whatever. Let’s just get it over with.

The first two, ausrechnen and errechnen are basically cousins in that both prefixes shift the focus to the result of the calculation. The difference is pretty much only tone. Er- often has an epic vibe to it, and so er- verbs tend to not be used for mundane, everyday stuff.

Neither of the two verbs has a noun, but the the ge-form of ausrechnen, ausgerechnet, is also used as a stand alone expressing the idea of “out of all things/options it HAD to be this one?!“, usually in contexts where you complain.

The third one, berechnen is also more result focused than just rechnen. But it sounds more technical and computational.

But it’s not limited to heavy number crunching. And the adjective berechnend is actually a negative word for a person who is calculating in the sense of they’re not really being authentic but have a hidden agenda.

Cool.
Next up, we have abrechnen.

This one might be the most important one of all of them.
Just like the ones we’ve seen so far, abrechnen is focused on the end of the calculating, but the focus is a little different: it’s the idea of closure. Kind of like abschließen (to lock).
You usually find abrechnen in contexts where there some sort of debt to settle; two contexts in particular: payback in the sense of revenge. And paying in the sense of paying a salary (thus settling the debt for the work). That’s why at the end of a month, as an employee you get a Abrechnung.

Oh and since quite a few of you are students…. if you’re working in a bar or restaurant, counting your wallet at the end of a shift is also called abrechnen or Abrechnung machen.

Cool.
Moving on to the next group which could be called transformational rechnen.

Sounds kind of cool. Like… finding your life purpose or something. But it’s not as epic. It’s just a bunch of verbs that talk about how you transform something by doing math.
The most important verb is umrechnen which is German for to convert. In the context of numbers, not in context of God.

The other ones are more or less self explanatory… reinrechnen means to include something into an actual equation, rausrechnen means to remove something through by making calculations, kleinrechnen means to make small through calculations and schönrechnen means to make pretty through calculations.
Which brings us right to my beauty secret and –>>my new Online Course <<– “The Beauty Equation”. In it, I share with you the daily calculus routine I am doing that makes my skin SO SOFT, my hair SO GLOWING and gives me this amazing natural chasma … I mean charisma. Sign up now for the once in a life time price of $199 instead of $9000. Calculate how much you save and feel your skin unwrink…
“Emanuel, can you PLEASE continue with the article.”
Oh… uh… sorry… do you want examples for these verbs?
“No, we’re good. Are there anymore prefix verbs for rechnen we should know?”
Gee… why you in such a hurry? Learning German isn’t a race. It’s more like a life time companion.
Seriously though, the last one we really do need to mention is verrechnen.

Ver- lends its idea of wrong to the rechnen, so sich verrechnen means to miscalculate. And as so often with meanings that are based on the wrong-ver, you do need the self reference there

But if you’ve read my article on ver- , you’ll know that ver- has four notions to offer. So it is no surprise that verrechnen has a second meaning. It can also express the somewhat hard to describe idea of making something go away by doing calculations. Usually, it is used if two parties owe each other amounts of money and instead of paying back and forth, you calculate them together.

But yeah… actually it’s not that important. Just keep it somewhere in the back of your head that verrechnen is ALWAYS about miscalculating.
Cool, and that’s it for today, I think.
This was our look at the various versions of rechnen. Once again, my lovely unpaid assistant made a great little quiz so you can check if you remember the important points. And as always, if you have any questions or suggestions just leave me a comment.
I hope you liked it and see you next time.

Oh and don’t forget to sign up for my beauty-course. It’s epic.

abrechnen – to calculate, to settle a score
die Abrechnung – the closing statement, the reckoning