A fun look at the meaning of "der Raum", because the nouns and verbs based on it fill up a big room. Today, we'll go in and tidy up a that chaos :) (hint, hint) 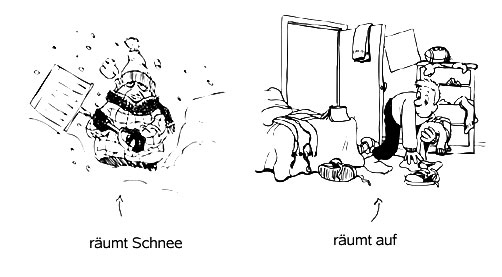 Der Raum is of course the German brother of English room and it is all about space … in all kinds of uses.

Naturally, there are also many common compound nouns with it.

Zeitraum... hmmm …  maybe that’s where Mozart got his inspiration for his space-time.
But anyway, there is one area where Raum and room don’t really match up… and that’s our home,or more generally places where we live. Sure, a 3-room flat is sometimes called Dreiraumwohnung but the rooms themselves are not called Räume, they are called Zimmer…. like Hans Zimmer, the film composer. But you have to say “Tsimmer”
Das Zimmer is related  timber and also to words like dome,  domicile or Russian dom (house). They all come from a root that meant to build. And because for a long time houses were build with wood, it’s not totally crazy to call it Zimmer. Here are the most important ones…

All right.
Now, all this is certainly nice to know but what really makes Raum special and a Word of the Day is the verb räumen –  yet another one of those verbs that are missing in textbooks but that people use every day… at least in combination with prefixes. So let’s take a look.

The core idea of räumen is not very surprising… and if you think I’m going to pull a cheap joke by giving a bogus, then let me tell you this:  you err. The core of aufräumen is “to freshen up”.  Haha…. gotcha.. it is “to make room”.
Now, if we want to make room we have to remove whatever is taking up the space. And that is what räumen is all about… removing something. And because it is also about space, we usually räumen larger objects. You wouldn’t use räumen in context with a few bread crumbs that you wipe of the table.
Now you’re like “Give us examples. What’s the translation? “… well, the best translation is probably to clear… because it has the same weird double focus as  räumen…. double focus isn’t really a thing, don’t worry. I just needed a word. So… the basic structure is this:

Subject, verb, direct object. Plain and simple. But once we look at what etwas can be, we get two quite different meanings. Of course etwas can be the thing that gets removed.

But also the location that gets emptied can be the direct object, too. And that is the far more common use.

That means that he removes all his stuff and leaves himself. Does that lead to confusion? Well… not really. Often there is some information in the sentence that gives it away

And even without any hint… context mostly makes it clear.
Now, the verb räumen itself isn’t that useful in daily life but this weird … I guess we could call it double focus is present in most of the prefix versions.
Let’s take for instance abräumen.  The ab- adds the idea of taking away from the top of something.

In the first example, we are told the location and not what exactly is being removed, in the second example it is the other way around. Context clears it up… haha… clears it up. Get it? Clear like räumen… meh never mind.
Very similar to abräumen are ausräumen and einräumen. Aus is about taking stuff out of something and ein.. well, you get the idea :)

These last few examples had a lot to do with  cleaning. And the next one is even a translation for that.
Aufräumen is kind of a general term for bringing stuff in order and every kid in Germany hears it on a daily basis.

Putzen, waschen, reinigen, sauber machen... all those are to clean more or less about removing dirt and they imply water or detergent or something. Aufräumen is to clean too, but it is more about bringing things in order.. picking up all clothes from the floor and folding them, bringing all the cups and plates to the kitchen, sorting the DVD collection… that sort of thing. It can include the use of water and wiping… for instance if we have to aufräumen our kitchen after a party, but that’s not the main component.
And aufräumen isn’t only for rooms.

Does aufräumen have the double focus like the others? Well… most use the location as the direct object… room, desk, hard-drive. But there is stuff like

and I think this is not about having tidy mess after, so we can, without a doubt, say that it is also possible to aufräumen the cause of the aufräumen…. uhm… maybe I should aufräumen that last sentence. But anyway… aufräumen can also be used without any object.The location and the target is then usually implied by context.

All right.
Now there are a still a few other verbs left. Umräumen uses the “change”-meaning of “um” and it basically means to rearrange the furniture in one’s home… quite a handy word actually.

Then, there is wegräumen and this one actually cannot refer to the location, that get’s “spaced up”. Only to the thing you remove.

Last but not lea… well… actually last AND least we have verräumen, which is a technical term for storing away stock. Yeah… räum that on your passive pile.
So. let me think, is that it?… I don’t want to forget anything… uhm… …oh  yeah… there are a few abstract meanings in more or less fixed phrasings …

Aaaand… I think that’s it. Awesome. So this was our German Word of the Day der Raum… Raum means rooms, (unless  it is one room we live in) and it is the basis of the verb räumen. Räumen has at its core the idea of “making room by removing something”  it can take the thing you remove as well as the location you remove it from as a direct object and, together with various prefixes, this idea is often used in sense of  some sort cleaning… abräumen, aufräumen, wegräumen… all those are part of daily life and I’m sure you’ll come across them sooner or later.
If you have any questions about today’s words or if you want to try out some examples of your own, just leave me a comment.
I hope you liked it, and see you next time.