A quick look at the meaning of Quatsch and quatschen. 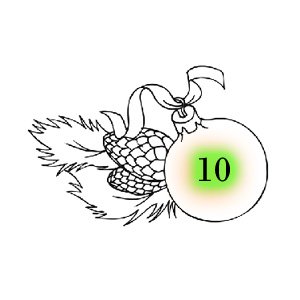 day 10 of our Advent Calender and behind this door is something that you probably get to hear a fair amount of if you celebrate Christmas with your extended family.
Like… this odd cousin who tells you that he’s never been into this stuff but now he has seen this video on Youtube and the flat earth people actually have a point. Or the drunk uncle (also known as druncle) who claims he can crack a Brazil nut with his teeth, but refuses to show it because, as he puts it “He ain’t got nothin’ to prove.”
Or the 13  year old girl who says Greta is going to become president of the United States once she’s 18.
All this is nonsense, and the German word for that is

Quatsch is the noun for the verb quatschen, which itself was likely an imitation of the noise you get when you step into mud with some force. A pretty good one, actually. It really does sound like that.
But yeah, already 400 years ago, people started using quatschen also in a sense of talking nonsense and that’s how Quatsch became what it is today.

The verb quatschen itself is also still around. Actually, it’s super common in colloquial German. And interestingly, it has lost quite a bit of its negative overtone and intsead became one of the most common colloquial words for to chat. Not in the sense of texting but in the sense of having a casual conversation with a friend.

Both words are incredibly common in colloquial German and I’m sure you’ll hear them. And if you are celebrating with Germans over the holidays and one of them talks some serious Quatsch, you could use the following idiom and casually ask:

That’ll definitely stop them in their tracks :)
That’s it for today, folks.
As usual, if you have questions, just leave me a comment. Have a great day und bis morgen :)