Word of the Day – “das Mittel”

We travel to the core of "das Mittel" and see what on earth the word middle has to do with remedy and learn loads of useful words with "Mitte" in them :) 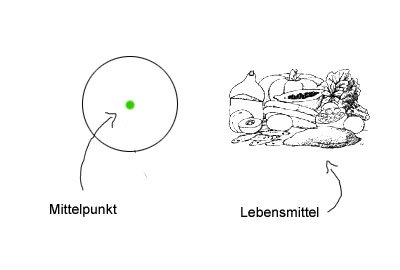 And if you’re now like “Hmmm… looks an awful lot like middle. Kind of lame.” then you’re horribly mistaken. On the lame part, I mean. Yes, Mittel is related to middle, and yes, they do share meaning. But Mittel is defimittly more than .. ahem… mitts the eye. Hahaha. And not only Mittel. The whole family it comes from is actually more than.. ahem.. mitts the…. oh wait. We already had that. What I mean is… we’re definitely in for some cool reveals, so let’s waste no time and jump right into the earth of Mittel.

The origin is the super ancient Indo-European root *medhio, which meant simple middle, and which is also the origin of the the Latin branch of medium – a fact we’ll get back to later.
As far as the basic idea of middle goes, English has middle and midand that’s pretty much it. In German, there’s a but more more variety.

First of, there are a few old, fixed words like Mittag(midday, noon), Mittwoch(“midweek”, Wednesday) or Mitternacht (midnight). Yep, Mitternacht, not Mittnacht.. because confusion.
Next up, there is the super common noun die Mitte which means the middle and also the center. Berlin even has a district called Mitte. We also call it Shitte sometimes because it’s full of models, fashion stores, hipsters and expensive fusion cuisine restaurants. There’s a coffee shop that denies you milk for your cold brew even if you ask for it repeatedly. Because they know better than you how you should must like your cof.. but I digress. Examples.

The next word you really need to know is mitten. why do you need it? Because German has two ways to say in the middle… well more like a dozen ways if you count the preposition. There’s mitten in and in der/die Mitte , and mitten aus /aus der Mitte and so on. The difference is tone. The Mitte-version sounds quite factual and local. The other option is emotional. It tells us that the fact that something is in or from or on the middle somehow gets to you… makes you angry, fascinates you, surprises you.

If that isn’t confusing enough yet, then there’s also inmitten. But that is pretty much like amid, I’d say.

Then, there are adjectives like mittig and mittlerewhich express the idea of central

And last but not least there’s our word of the day Mittel which means…. middle. But not the middle. That was die Mitte. Mittel is middle as part of compounds like these:

There are plenty more. Now, let’s stay with the last one in the list because that brings us right to the first more abstract idea of Mittel and the whole family.

Mittelwert means average (value).And thatmakes sense. Think about it… an average value is in the middle of a bunch of values, right? And in fact already the good ol’ Romans used their branch of middle-words to express the idea of average. Just think of words like median, mediocre or mean. Wait, mean? Yeah, mean. Mean is a mean word because it has three different origins. The mean in sense of mean value comes straight from the Latin medianus.
So… Mittel carries the notion of average and there are quite a few uses for it it.

Now, this whole idea of average can be bent into being the key to the verb ermitteln.
Try to think of an average as the essence, the core of things. Single values can be interesting but an average often gives you a better impression of the reality. And this core often not obvious. You have to mine data to find it. Or in a more general sense, you have to dig, do research, investigate. And that’s the idea of the somewhat formal sounding ermitteln. The translations vary depending on context but it is always about some sort of investigation in order to find out some fact. Maybe this example helps make the connection :)

But ermitteln is used in a very broad sense so let’s look at some example.

Maybe just think of ermitteln as trying to get to the center of something in sense of knowledge.
All right. I think this whole notion of average was are already quite useful. But the real meat of Mittel comes now. And it’s served medium rare. Just like my jokes.
They’re not well done either……….

The “in between” and how to cross it

Being in the middle can also mean being between two things. They’re not right next to each other, there’s something you need to pass by to get from one to the other. This notion of something being between things is the basic idea behind the word unmittelbar which means directlyand immediately.

And if you’re now think “Man, why does German always have to twist stuff” then let me tell you – the same twist exists in English. Cause the good ol’ Romans did the exact same. Just take another look at immediately. That’s basically medium, just with an a and a bunch of extra syllables and it literally means “nothing in between”.
And speaking of media… guess why the media is called media. On one side there’s us, on the other the news and in between is … the media. They mediate, they relay the news to us. They “bridge the gap”. This notion of bridging the gap, getting across the “in between” is the core idea behind the verb vermitteln.

And it’s the core of the word das Mittel itself. A Mittel is a way get across the “in between”, a thing that helps you your goal. At first, a Mittel was just something that stands in the middle. From there, it slowly took on the notion of something being in the way, an obstacle. And then it changed again and became a thing to overcome the obstacle. A… drum roll please… means.

All right. Time for a quick recap. The core of the family is the simple idea of middle. But the idea of middle is not that far from the idea of average. And it’s also not far from the idea of something being in the way, and from there it’s only a small shift to something helping across the stuff “in the way”. Sure, it does need a little mind bending but the good thing is that you can find all the twists in English as well. Mean value, immediately, media, a means to an end, middle, Mittel, ermitteln, vermitteln… they’re all one family. And there are more. I totally forgot about mittlerweilefor example which literally means meanwhile but it’s often used more in sense of by now.
But let’s do examples for that in the comments. Because I’m mittlerweile quite tired. And they won’t give me milk for my coffee so I think we’ll wrap it up here. I’ll add a few more words in the vocab section but I think you can guess most of them from context. As always, if you have any questions or suggestions just leave me a comment.
I hope you liked it and see you next time.

I made a trial Anki Deck for this one. Let me know what you think:

die Mitte – the middle, the center
“Mittel-” – “middle” for compounds
mitten in – “in the middle of”, with emotional undertone
in der Mitte – factual, often for location

ermitteln – investigate (police); determine, find out (involving at least some investigation)
die Ermittlung(en) – the investigation(s) (often as a plural)

vermitteln – relay, convey, broker for someone, mediate
die Vermittlung – the relay, the mediation, the “hooking up someone with something”
der Vermittler – the mediator
nicht vermittelbar – bureaucratic jargon for “not fit for any job”
unvermittelt – suddenly (“not mediated”)