A fun look at the origin and meaning of "der Zweck" and its related words. 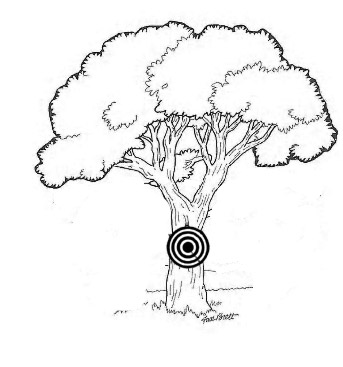 Back in the 8th century a Zweck was something like a small nail or pin.  to be a small nail and in the 14th century is was especially often used in context of fixing your target on a tree or a wall for archery training. Not everybody was a good shot. One king in particular had a really bad aim. And so one day, at target practice, this happened:

Okay, maybe this isn’t 00% historically accurate. But roughly that’s what happened. First, the Zweck was just the nail to hang up the target with, but slowly it added the notion of being the target itself. The meaning of nail  and what remained is the meaning it has today – if I had to chose one translation, I would say purpose is the best but it really depends on context. Zweck is kind of  a blend between target, objective, use and purpose. It’s not target in sense of actually aiming at something. That would be das Ziel. And it’s not purpose in epic contexts of “Everything has a purpose.” That would be Sinn.
Zweck is very factual and down to earth.

Improving the quality of service is the “use” of the recording, just like “holding the target” was the use of the nail, and it’s also the goal just like nail became a word for the target itself. I hope you can see how the meanings blend. So… if you want one translation, then go with purpose, but don’t get too fixated on that.
Let’s look at a few more examples for Zweck.

As you can see, the translations really vary but I hope you could see that it’s always the same idea.
Cool.
Now, of course there are also compounds with Zweck. A Mehrzweckhalle is a multi purpose arena, Testzwecke are tesing purposes, if you want to wire money somewhere you’ll have to enter a Verwendungszweck and of course we need to mention the wonderful word Zweckehe…

And there are some adjectives, too.

Ha, the second example is probably one of the most German statements ever. Germans really LOVE their gear and their “Funktionskleidung”. Like… even people who only hike once a decade most likely have special new hiking attire in their closet. Got to spend your money for something, I guess.
Anyway, back to Zweck… hehe… that rhymes. Germans actually loved the word Zweck so much that they made it a preposition : zwecks something means for the puprose of something and while it probably was born in an official context, it is so short and snappy that people use it in daily life, too.

Okay, the last one is really as colloquial as it gets so I’ll it up to you to translate that :).
Cool.
So that’s Zweck… pretty useful, don’t you think?
Now, before we wrap this up let’s also have a look at the two verbs that are based on Zweck. The first one is bezwecken which is a pretty technical, stiff sounding option for to intent, to try to do.

The one that’s really cool though is zweckentfremden which is the idea of “using something for a purpose other than the purpose it was intended for” condensed in one word. I guess to misuse is the closest translation but zweckentfremden doesn’t sound nearly as negative.

It’s also used in legal jargon. In Berlin for instance we have somewhat of a problem with people illegally using their rental homes as vacation apartments, making the housing shortage ever worse. Keeping that at bay is the Zweck (purpose) of the  ZwVbVO, and if you’re now like “Dude, this acronym is longer than many words.” then take a look at what it stands for:


Daaamn. You do not want to mess with that word. That word eats you alive. Some people say the name alone has lead to a 20% drop of illegal vacation apartments. But those are the same people that say that a king with a bad aim is the reason for the meaning of Zweck…. so… yeah. Only me :).
And I think that’s it for today. This was our look at the word Zweck. At first, it simply was a word for small nail. It was used a lot ion context of fixing the target for archery practice and over time it shifted from simply being the nail to being the target itself.
By the way, the old nail meaning has been preserved in the German word for pushpin, tack … die Reißzwecke.

Outch. If you want to review the words in this post check out the vocab section and if you need some material to bore people at parties with… I got you covered with the new trivia section :).
As always, if you have any questions or suggestions or if you want to try out some examples just leave me a comment. I hope you liked it and see you next time.

1)
There’s very little evidence but Zweck might be related to Zweig and twig. And those are based on the root of two (a twig is where the branch splits in two)
2)
With a bit of mind bending, the word “purpose” is kind of similar to Zweck. It’s a combination of putting (pose) and forth (pro). So the “forth” adds some notion of future to the mere putting, thereby shifting it from mere use toward goal… meh, let’s make that a LOT of mind bending.

zwecks – for the purpose of