Word of the Day – “schrumpfen” 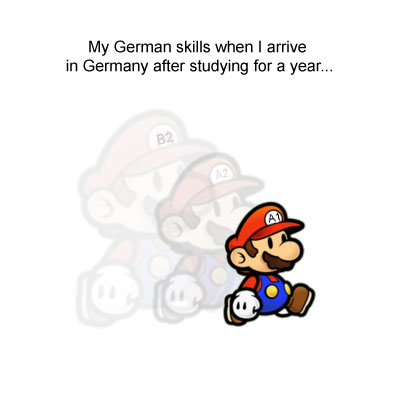 and welcome to our German Word of the Day, this time with a look at one of the most German sounding words ever:

A word like the smell of moss on an old musty oak tree deep in the forest where a boar forages for truffles.
Or the sound of an old, giant steam engine piston moving.
Or the name of a German metal band.

A word that seems like it’s a freeze dried version of a real word and you have to pour water on it to make it expand.
And a word that describes what happens to our self confidence when we make our first attempts at speaking to a native speaker.

Because schrumpfen is the opposite of wachsen and means to shrink.

Now, just like English, German has more than one option to express the opposite of growing.
Like kleiner werden and abnehmen or eingehen.
And I know your brain is yelling at you that you need to know the difference between all of them RIGHT NOW! But trust me… the opposite is true.
You do not need to know that now. I’ll give you a little overview at the end of the article, so tell your brain to chill.

Schrumpfen is definitely not all that common in daily life, but it’s a good choice for shrinking that you want to sound “severe” and colorful.  And there are a surprising number of compounds with Schrumpf-.
Most of them are technical terms for industrial parts or processes, or they’re niche words like Schrumpfkopf, which is a shrunken head (and a great name for a metal band, once again) or der Schrumpftrank.
Those of you who are into role playing probably intuitively know what that could be right away.
I mean… the D&D style role playing. Not the adult, fifty shades of gray style role playing. You’d probably want the opposite of a Schrumpftrank there. Unless you’re super well hung.

Anyway, so now you know schrumpfen, one of the German translations of  to shrink. Are the two related? Well, no, most probably not.
But schrumpfen does have a close relative in English. And at least if you’re into seafood you’ll have had a fair share of it.
Any idea what I mean?
I am talking about shrimp. And seeing how much shrimp shrink when I fry them, that’s a very fitting name. And they’re also called die Shrimps in German. Or die Garnelen. It’s the same thing pretty much. But not Scampi... those are a different species, actually, even though they look similar.
“Oh great, you’re telling us the difference between Scampi and Shrimp but not between the various word for shrinki…”
Quiet, brains!
We’ll get to that later.
First, there’s also a German relative I want to tell you about – the verb schrumpeln.
And schrumpeln is basically what happens to grapes when they become raisins.

So while schrumpfen is about a reduction in size, schrumpeln is about the pruney, shriveled surface.
And I don’t know about you, but for me, schrumpeln really “sounds the part”. Schrumpeln.
I mean… the English translation to shrivel is also not bad, but schrumpeln… I don’t know, for me it just perfectly sounds like what it stands for.

Anyway, so schrumpeln is to shrivel, to get pruney and its equally common brother verschrumpeln is essentially the same; just a little more focused on the result. Oh, and then there’s the adjective schrumpelig, which of course means pruney, shriveled.

Oddly enough, there is no noun based on schrumpeln, so if you want to talk about the wrinkles and puckers, the word is either die Falte(n) or die Runzel(n).

Neither of those really fits for, say, the shriveled pepper in the back of the fridge, so go for a phrasing with verb or adjective there.

And that’s pretty much for today.
This was our quick look at the meaning of schrumpfen and schrumpeln.
As usual, if you have any questions or suggestions, just leave me a comment.
I hope you liked it and see you next time.

Oh… and I totally forgot the overview:

kleiner werden:  most generic word that works for lots of things that grow in size

It’s a really coarse overview, but I hope it helps. Just check my dictionary for more details :)