Word of the Day – “ausschlafen”

A quick look at the meaning of "ausschlafen" and its brothers "verschlafen" and "einschlafen". Also: some grammar... yawn!

and welcome to our German Word of the Day – this time with one of the best things ever:

And actually, it’s more of a post about the whole family of schlafen with various prefix versions. But ausschlafen is so cool that I wanted to honor it by making it word of the day.
And before you all fall asleep while I am telling you stuff from the “who cares” bin, let’s jump right :)

So, schlafen of course the German brother of to sleep and they both come from an old root *(s)lē̌b- which was about being weak or without tension. This meaning is pretty well preserved in the German words schlapp, which is a colloquial term for someone who has no strength, and schlaff, which is about something having no inner tension.

Another relative in German is apparently the word der Lappen, which means rag or cloth, and which usually does lack inner tension… I mean, unless it’s so dirty that it stiffens up.
Anyway, the German etymological source I use also connects the Latin branch of lābī   to the family, which includes words like labile, collapse or labour. Which would make sense, because labour can wear you out quite a bit.
English etymology didn’t mention that connection though, so don’t use it for a scientific paper. It’s just a neat way to remember words and build a neural network.
Anyway, so the origin of schlafen is a root that was about being weak, having no inner tension, and that’s a perfect match.
Grammatically, however, schlafen is NOT a weak verb. It’s one of the strong ones verbs, which are called strong because… I don’t know… maybe they can bench more than 40 pounds or whatever. These grammar terms don’t really make sense to me.
But yeah, in the present, we have this one-up for the vowel from a to ä for the second and third person, the real past form is schlief and the ge-form is geschlafen.

Other than that, there’snot much to say about schlafen, so let’s move on to the prefix versions.

You ENTER the sleep if you will. And this notion of entering is also why the spoken past in the second example is build with sein and not with haben. You’re moving from one state to another.

Cool.
Now, once you’re managed to einschlafen, the next desirable prefix version is durchschlafen,  which is about not waking up up in the middle of the night.
But even if you do wake up because you need to pee or feed the elephant in the room some thoughts – it doesn’t matter, if there is no alarm the next day and you can just turn around and add a few dozen minutes of dozing.
And THAT is ausschlafen. To sleep as long as you want, or until you’re well rested.
It’s usually translated by to sleep in and to sleep late.
The latter is a bit off, though, because ausschlafen is not really about a time… it simply means that you sleep as long as YOU want. If you wake up at 4 am everyday, well rested and without alarm, that would still be ausschlafen, but you wouldn’t call it “sleep late”.
Anyway, here’s a couple of examples:

And as you can see, ausschlafen uses HABEN for the spoken past, because unlike einschlafen, that one is NOT about a change of state.
A bit confusing, maybe, but don’t worry…
it gets worse. Because you will also hear this:

This is also a correct and idiomatic sentence and especially for a beginner, it might look like it’s a spoken past of ausschlafen.
But what’s really going on here is that ausgesschlafen is used as an adjective, like well rested.
Here they are back to back…

The first one talks about what you did, the second one about how you are. The overall message is really similar, but grammar wise it’s quite different.
Cool.
Now there’s one last prefix version that we need to mention: verschlafen. And this one might be the result of some legit ausschlafen on your part, because verschlafen means about missing by sleeping. You can either “verschlafen” something specific, like a scene in a movie or a meeting.

Or you can just plain verschlafen, which the to oversleep. Like… you set and alarm, but it didn’t wake you up, for instance.

Just like ausgeschlafen, verschlafen is also used as an adjective in the sense of sleepy.

But we should not that the more common word for sleepy, particularly in the context of being tired is schläfrig.

Let’s also give a quick shout-out to the verbs entschlafen and vorschlafen. Entschlafen is rather poetic sounding word for to die, quite similar to the English to pass away. And vorschlafen is what you want to do before going to a 4 day festival – building up a “stockpile of sleep”.  Science says that it’s is not possible, of course, but science is freaking B.O.R.I.N.G!
And speaking of boring… just like in English, schlafen mit someone commonly used as a word for having sex.
And I’m not sure you got that boring reference right immediately.

Someone finally scored.
Cool.
So that’s it for today. I totally forgot to mention the noun der Schlaf, which is the sleep, but it’s no problem because I mentioned it now.
This was our quick little look at ‘the Schlafens‘
As always, if you have any questions or suggestions, just leave me a comment.
I hope you liked it and see you next time.

Oh… and here’s a picture of kitten. Because no one sleeps better than them. 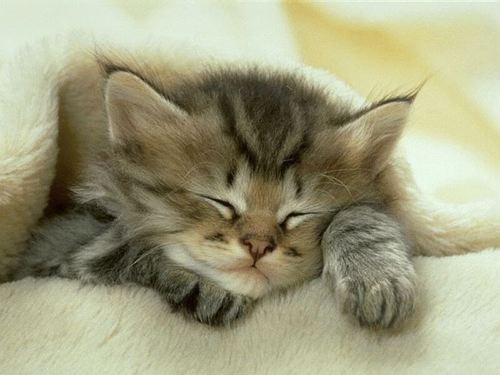