Word of the Day – “die Schicht”

The German word "die Schicht" means "layer" and "shift". Today, we'll find out why and how to use it and if there's any other useful words in the family. 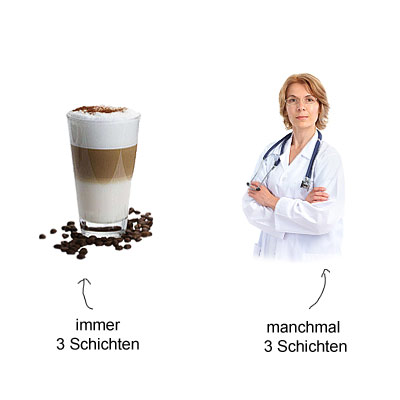 and welcome to our German Word of the Day.
This time with a word that has a really interesting double meaning:

Because die Schicht is a layer, like the layer of foam on the iced matcha pistachio latte I am sipping right now.
And die Schicht is also the shift of the barista who made me this latte. He’s new at my favorite café, by the way.
Great work Michael, thank you.

But yeah, so die Schicht means layer and shift is actually also the brother of Schicht because they both come from the same verb –  old Germanic word *skiftjan… don’t worry, I don’t know how to say that either :)

The origins of this verb go back to the stunningly ancient Indo-European root *skei-, which is also the origin of words like shed, shit and science and the German Unterschied.  Quite an odd combination, but the theme that unites them all is separation, shedding, telling apart.

And that’s also pretty much the theme of the old Germanic *skiftjan, which was about dividing, separating and also ordering. Like… putting in order, not ordering lattes.

In English, this sense slowly … ahem… shifted toward ordering locally and started including the idea of movement. Think of a weekly schedule where you shift (aka) things around, like on Trello or something.
And there, we also have already have a tie in with the noun the shift in the sense of a shift at work, which is basically just a separated time slot.
But the at least according to German sources, there’s another connection.

You see, in German, the old *skiftjan was used a lot “ordering vertically” – or in other words: in layers. That’s how die Schicht came to mean layer and one where it was used regularly was mining.
For the… what… hold on… oh… sorry, so Michael the barista heard me say mining and thought I was talking about Bitcoin mining… haha… cute.  But no, I mean real mining. I’ll have another Latte, though, please.

And then, the noun started also being used in mining for a layer of rock you work on, and from there it’s not far to the meaning shift at work. Think about it…

In the context of mining, this makes perfect sense with both  meanings – “My shift was hard.”, and “The [rock] layer today was hard.”

This sense of work shift caught on, and soon die Schicht had the double meaning it has today.
Time for some examples.

Oh, it’s worth mentioning that Schicht is typically used for actual physical layers of all kinds, and not so much for figurative layers. Like the layers of a story for example or the layers of a problem.
I mean, it’s not completely wrong, but the better word there is die Ebene.

And while we’re at it, the other Schicht, the shift-Schicht is ONLY used for work shifts. So it does NOT carry any sense of “shifting” or “change”.
And also, it’s ONLY used for jobs where there actually ARE shifts. Like in a hospital or a production plant or a bar. You would NOT use Schicht for a 9 to 5 at a desk.
That’s the same in English though, so it should feel familiar.

Cool.
Now, as far as related words go, there are hundreds of compounds of course, for both meanings. We’ve already seen some in the examples and generally, most of them are super intuitive.
Sure, some are a little more figurative like Unterschicht, Mittelschicht and Oberschicht, which are NOT about the three layers of a Latte Macchiato, but instead about the “layers” (e.g. classes) of a society.

But still, I think you’d have no problem figuring this out, when you see it in context.

And the same goes for the other related words.
The verb schichten for example simply is about arranging something in vertical layers.

Umschichten with um in the sense of turning over is about having a pile with some layers and changing that around. So you’d use that in a garden when you dig over the compost, so the stuff on the bottom gets to be on the top and vice versa. And you’ll also find it in the context of finance, particularly state finances, when budgets are redistributed… basically a pile of money rearranged.

And last but not least we have beschichten, which is a true game changer, at least if you like frying eggs in a pan. Because beschichten is the German word for to coat (“putting a layer on something”).

And with that we’re pretty much done, except for one question which many of you have been wondering at least since I used geschichtet in the barista example. That question is:

How does Geschichte tie in with all that?
(the German word for story and history)

And the answer is – it doesn’t.
Geschichte has no relations to Schicht.
It would make sense though – stories and history are kind of ordered successions of events. And we could even see them as people having “shifts” in the (hi)story.
So if that makes sense to you and helps you remember Geschichte or Schicht… go for it.
The real origin of Geschichte is the verb geschehen, which is one of the bazillion German verbs for to happen.
But that’s a story, for another time :)

For today, we’re done with our little look at the meanings of die Schicht.
As usual, if you want to recap the most important points, just take the little quiz I have prepared.

And of course, if you have any questions or suggestions just leave me a comment.
I hope you liked it and see you next time.

What to read next?

I have a new feature that gives you a random post.
If you’re a member you can see if you’ve marked it already.
Let me know, if you like this and if I should put it under every article.
Danke :)