We’ll look at the family of die Not and find lots of necessary words - literally :). 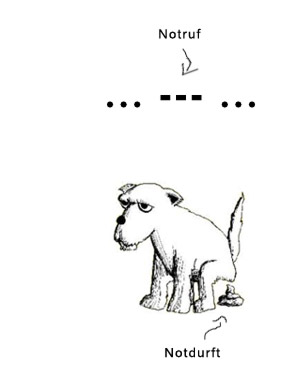 And no, Not is not not.
Not is the German brother of English the need. But it’s much, much stronger. Like… if you’re in need, well, you just need something and that can be more or less urgent. But if you’re in Not you basically need rescuing…. and no… Not is not an awkward conversation with that colleague who’s trying to hit on you. It’s real distress.

Not by itself usually means a dire situation, often used in contexts where people lack the basic needs like food and clean water.

I guess because life was rather hard for the majority of the people a few centuries ago, it’s no wonder that there are plenty of phrasings and expressions with Not that are all pretty common today.

And there are many more. But not as many as there are compounds with Not, and in compounds Not is THE word for emergency.

So… we’ve seen that the translation varies but I think we can see the core idea of ‘strong need’ in all of them.
Now, of course there are quite a few related words and those are super usef… oh, hold on, I see we have a call here… Christie from Scotland, welcome to the show.
“Hi Emanuel. Thanks for taking my call. “
Sure thing, what can I do for you?
“I have a question about a compound with Not I saw in a newspaper today.”
Which one?
“Notdurft… the complete headline was ‘Frau nutzt Einkaufskorb für ihre Notdurft’ and if I understood the article correctly, a drunk woman took a shit into her shopping basket at Aldi….”
Hahaha… that’s accurate. It does mean that. Itcan refer to the action of pooing as well as the result.
“Well… I can see the connection to urgent need I guess but I’m wondering about the -durft? Does that have anything to dürfen?”
Great question! And yes, it does. Today, dürfen is about permission but back a few hundred years ago it was the verb for to need. And not only in German. Old English had ðearf which meant need, necessity but it actually also had niedðearf, which also was about need, necessity... just a stronger version. But need pushed ðearf out completely.
“Wait… how did dürfen end up with the whole permission idea in German then? I don’t really see a connection there.”
Yeah, it’s not so obvious. The permission thing crept in through negative statements first. Like… imagine a mom at the supermarket telling her kid “No, you don’t need that candy bar.” with a very resolute voice. She clearly tries to deny permission without actually saying it. That’s how the idea came in … as a euphemistic way to deny permission. And then it caught on and the old meaning was eventually forgotten.
“Ah I see… so and Notdurft has kept the old meaning of need.”
Exactly… but it narrowed down to the need to pee and poo.
“Cool… and what about notdürftig? I think I saw that in the same article… does that mean shitty?”
Haha, no… notdürftig is about strong necessity on a more general level. Originally, notdürftig meant needy,but today it has shifted toward needy of improvement. It’s kind of about the fact that something is an emergency fix….

so actually it kind of does mean shitty but it doesn’t sound negative because it’s used for quick fixes.
“Cool, thanks so much for answering my questions.”
Oh, thank YOU for bringing up Notdurftand notdürftig. I would have forgotten that completely. Thanks, and stay tuned for the other related words now.
“I will, byeeee.”

nötig, notwendig and an unnecessary verb

Not itself is a good word to know but as usual it’s the related words that REALLY make it useful. Mainly the two words notwendigand nötig.
Wenden is one of the three dozen German words for to turn so taken literally, notwendig means something like “turning the dire situation around”. Like… something that’s notwendig is basically what is needed, necessary. And it is much less serious or strong sounding than Not so you can also see it in

Nötig is essentially the same, but it sounds a tad bit less technical and the situations where you’d use it are a bit different.

Technically, you could use notwendig in the first two, but in the second two, (un)nötig is the only option.

Now, the cool thing about nötigare the common expressions that it’s used for.

This one is a very common way of showing genuine appreciation for a little surprise or gift or favor. It might sound a tiny bit too formal for close friends but especially when you’re over 40 it’s totally something you can use.
Next up there’s the phrasing etwas nicht nötig haben. Literally it means that you don’t need something but the actual meaning is more about you thinking you’re above something, you’re too good for it. Depending on context it can sound stuck up or self empowered but it definitely always sounds confrontational

There are a LOT of these waitresses and waiters in Berlin, trust me.
All right.
Now, we’re almost done for today but a real word of the day article needs at least one verb. For Not it’s benötigen. Using the standard core of the be-prefix we can think of it as “to inflict needing on something” which is a pretty good match because benötigen is essentially a formal, technical sounding alternative to brauchen.

What’s important to note is that benötigen DOES NOT work for activities. So you can’t say

You can only benötigen things, and so I don’t think you benötigen benötigen and you can put it on the passive pile. But Not and nötigare really good to know and I’m sure you’ll see them quite a lot.

And I think that’s it. This was our look at the meaning of die Not. It’s related to the need but it’s pretty much never a translation for it because Not is much stronger. The relation totally shows with the adjectives notwendigand nötig which mean required, needed, necessari(ly).
I’ve added some more Not-compounds to the vocab list so check that out if you need to collect words. And as usual, if you have any questions or suggestions or if there are some more cool idiomatic expressions with Not you want to mention, just leave me a comment.
I hope you liked it and see you next time.

im Notfall – in the case of emergency (formal)
zur Not – if it’s really urgent/if it’s an emergency (colloquial, common)

nötig – necessary, urgent
notwendig – necessary (technical, formal)
die Notwendigkeit – the necessity (technical)
unnötig – unnecessary
etwas nicht nötig haben – be better than having to do something (can be positive and negative)