A fun look at the meaning of "melden" and why it is so common in colloquial daily life. Also: a long awaited foe appears. 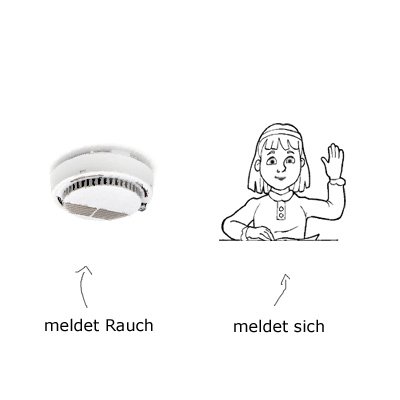 and welcome to our German Word of the Day.
And today, we’ll take a look at one of those weird under-the-radar words.
You know… the ones you never really notice until you’re made aware of them. And then you start seeing them everywhere.
Kind of like opportunities. Or the beauty of small things. Or your coworker’s pee-markings on your desk… I mean, no one likes snitches, and marking your own desk is one thing – but marking half the office?
Anyway, ladies and gentlemen, let’s take a look at the meaning of

Melden looks fairly similar to melting and moulding but neither one is remotely related. In fact, melden is one of those verbs that doesn’t really have an English relative anymore. At least none that I could think of or dig up.

The origin of melden is not known for sure, but one possible root is the campily ancient Indo-European root *meldh– which was about… talking to whatever deities they had.
This root is the origin of the Slavic branch of “моли” (“moli“), which is in essence about asking someone to do something – either “intensively” like in Russian where is about begging, heavy pleading. Or just normal asking like in Bulgarian where моля “molja” is the word for please.

The German melden and its Germanic ancestors on the other hand – if they really are related to that root – focused on a different aspect of prayer: telling God what you want.

“Hello God, thanks for the great work on the dinner.
Please find attached your To-Do list the coming week.
Last week’s tasks of World Peace and Corona cure are still pending,
so make sure to include those as well.
Amen.”

Now, of course the Germanic tribes didn’t pray like that, even though they were a little more buddy-buddy with their gods than… well… monotheistic religions. I mean, seriously… Greek and Germanic Gods would drink, have orgies and hang out on earth all the time. Wouldn’t it be kind of cool if we believed that God sometimes takes human form to hang out at the gym? I mean, God’s arms and shoulders sure look in shape in that Michelangelo painting.
But anyway, if melden really does have ties to the idea of praying, the meaning shifted a LONG time ago. Because already over a thousand years ago, the core idea of the branch was relaying information. And it truly hasn’t changed much.
Because melden is still a pretty dry, pragmatic word for reporting, passing on information.

As you can see, the idea is not reporting in the sense of a reporter, though the noun Eilmeldung means breaking news for instance.
But generally, the gist is a somewhat formal passing on of formal information. And that also shows in the related words.

My Rauchmelder won’t report all smoke it detects though, because it ain’t no snitch. Am I right, Rauchmelder? I know you can see the screen from the ceiling. Snitches get stitches, you know?
Anyway, if you’ve lived in a German speaking country, I am sure you’ve seen some of those uses already.
But still, melden would be kind of a niche word, if it wasn’t for… its use with a self reference: sich melden.
Taken literally, it basically means something like “to report oneself”.

These two examples fit in well with the vibe we had so far, but sich melden is not always that formal.
It can just mean putting your name out at a meeting and in fact, it’s THE word for raising your hand in context of school (or generally, signalling that you want to speak).

Here, the notion of reporting is still kind of visible, but what REALLY makes sichmelden an everyday phrase is the fact it has evolved into a word that just expresses the general idea of getting in touch.

As you can see, this is a really common everyday word, and it’s actually kind of hard to chose one translation, because it is so dependent on context.

The first one could be a parent who basically just wants their child to let them know that they landed safely. The second one could be a friend who just wants you to hit them up if you’re in town. The fitting translation really depends on the context so don’t get too hung up on one translation.
But yeah… sich melden is definitely quite common in daily life and I’m sure you’ll hear it a lot. And it’s one of those words that’ll make you sound much more native, so if you dare, give it a shot and try it. Your friends will be impressed :).

Cool.
Now, we’re almost done, but of course we can’t talk about a verb without talking about prefix versions.
Melden doesn’t have many. Only four in fact. The least important one of them is, vermelden, is basically also about reporting but it’s REALLY rare and you can forget about it immediately. Like… 3, 2, 1… gone.
Then, there’s ummelden, which is what you do when you move apartments and you change your official registration.
But the ones that actually are useful are anmelden and abmelden.
In fact, I’m pretty sure most of you have done it a few times today already – directly or indirectly.
Some of you probably guessed it – (sich) anmelden is to registeror sign up/sign in. You “inform about the presence” of someone or something

Oh come on, are you serious… my interns made this because they think I “demand too much”. Come on guys, it’s not like you play computer all day in Communism. You have to work there, too, you know. Why is Gen Z so naive about some thi….
“OMG, that was very very Generationalist. I am SO gonna report that.”
What? Who said that?
“It is I, Cancel-Man.”
Ohhhhh, Cancel Man, so we meet at last. I knew this day would come. But you have to know one thing… this isn’t even my final form….*starts transforming
Buaaaiiiiiiiiiiiiiiiiiiiiiiiiiiiiiiiiiiiiiiiiiiiiiiiiiiiiii
Oh… that… that wasn’t the transformation sound, that was the BS-Melder. I’m clearly losing focus, so… uh … I guess it’s time to wrap this up :).
But we’re done anyway, so yeah… this was our look at the meaning of melden and sich melden and the latter is definitely something to add to your active vocabulary.
As usual, if you want to check how much you remember, just take the little quiz I have prepared for you.
And of course, if you have any questions or thoughts just meldet euch in the comments.
Have a great week and see you next time.