A quick, fun look at the meaning of "das Lob" and what it has to do with getting engaged and lobsters. 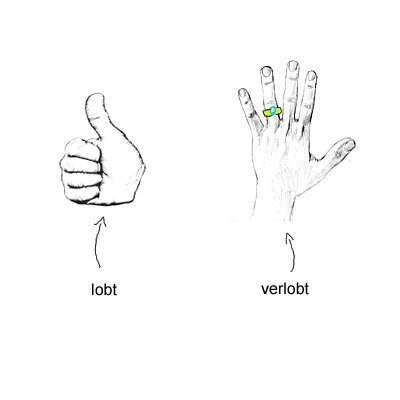 and welcome to our German Word of the Day. This time with a quick look at the meaning of

Sorry for the typo, haha.
So yeah, we’ll look at das Lob today, not only because it’s something that everybody likes to get, but also because there are a few related words that seem to have as much connection to das Lob as I have to the WIFI in the library.
NONE!!
If you listen to this, dear library… your WIFI is really really not good.
And that by the way was kind of the opposite of a Lob…

Because Lob is a kind of praise. And if you’re now like
“Oh, like love. Giving love.” then you’re spot on.
The origin is an Indo-European root that is so ancient, it’s actually blue: *leubh-. The core idea of it was liking, wanting, desire and of course this is where the words love and Liebe come from. And also glauben and its English translation believe, by the way. You see, a belief is essentially something you “hold dear” because it serves you in some way. Even the negative beliefs we have serve us in some way.
I for instance believed that I couldn’t get a six pack.
Because I was sure the stores were already closed. But that belief protected me from having to go downstairs into the cold rain.
But then, after a lot of self actualization work, I realized that I could just send an intern and bam, I’m sipping a nice IPA without ever having left my cha… but I digress.
So yeah, the root wasn’t only about really liking, it was also used to express that sentiment.

And that’s what a Lob is all about because a Lob is something you give someone if they did something really well. When you look it up in a dictionary, you’ll get praise and accolades as a translation. But those sound much stronger or bigger than Lob. Like… saying “Really nice soup.” certainly isn’t praise but it’s a perfect example for a Lob.
So in day life, I think “thumbs up” actually captures the essence of Lob the best.

I hope you got an idea of the vibe. Lob can be used for actual praises but it’s also the perfect word for a simple “Well done.” And that also goes for the verb loben, which means to praise or, more mundanely, to give a thumbs up.

The last example is apparently the mantra of many bosses and managers in Germany. Should you ever run into that, you can just reply by

They’ll love you for it and give you a raise because if Germans are known for something then it’s their sense of humor.
Anyway, besides loben, there’s also the verb geloben and this is a bit different because it’s not about liking but about making a strong, serious promise, like a vow or a pledge. And the word believe we talked about briefly earlier, can provide the missing link. If you make a vow, you really believe what you say to be true. You really really “desire” it to be real, if that makes sense.

The verb itself is quite rare and sounds rather epic and highbrow, so you won’t find it in daily life, but you might come across the noun. Well… actually, there are two nouns: das Gelöbnis and das Gelübde. The former is usually used in context of soldiers saying their pledge while Gelübde is used in church related contexts like for priests or, more importantly, the wedding vow.

And this brings us right over to the verb sich verloben, which is the German word for getting engaged. In the sense of marriage, that is. And once again, we have this notion of strong promise here . You “pledge yourself to your partner”.
The verb is rarely used in the present tense, but its drivert.. erm… daritav… deritev… its related words are pretty common.

There’s a lot of truth in the last one, by the way. Canoeing together can be a REAL challenge for your relationship.
Anyway, there’s a bunch of other related words like.. uh… belobigen, lobenswert, Hotellobby, Kilobyte or Lobotomie, but they’re all abou the idea of “small” praise and I’m pretty sure you’ll understand them when you see th… wait, what the hell… the last three don’t have anything to do with Lob. Why are they in my script?!
Ugh… these interns. They could have used their time to do a bit more research and find that erlauben and allow are also related to Lob. But no… they think they’re the king of funny and waste time on pranks. I guess I shouldn’t have said “Good job.” at the last meeting. No more Lob from now on, guys!

Anyway, that’s it for today guys. This was our little look at the meaning of das Lob and even if you only payed half attention, you should have no problem with the following question:

What do you call a crustacean that gives a lot of praise?
A lobster.

Badum tish.
As usual, if you want to check how much you remember, you can take the little quiz I have prepared. And of course, if you have any questions or suggestions or some Lob for me, just leave me a comment. I hope you liked it and see you next time.

das Lob = the praise, the thumbs up (not as epic sounding as praise)
Eigenlob stinkt. = A man’s praise in his own mouth stinks.
loben = to praise, to give a thumbs up
Nicht geschimpft ist genug gelobt. = Their silence is enough praise. (idiom)
geloben = pledge, make a vow (sounds very formal)
das Gelübde = the vow (mostly for marriage (Ehegelübde))
sich verloben = to get engaged
verlobt = engaged (sense of marriage)
der Verlobungsring = the engagement ring
der Verlobte = the fiance (die Verlobte for women, gets all adjective endings)
lobenswert = praise worthy