Kunde means customer. But also knowledge. And kündigen mean to fire someone. Today, we’ll find out what connects all those and learn some more cool words. 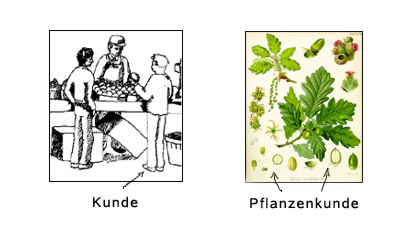 The meaning der Kunde is customer.  And that’s it.
See you next week.

Nah, there’s of course a bit more to it. Because there isn’t only der Kunde, there’s also die Kunde. And no, it’s not she-customer. Kunde has a lot of cool surprises and words in store for us. Haha… in store.  Oh, and also…  what’s up with the word customer? I mean… I don’t “custom” anything when I buy a coffee, right? So why isn’t called buyer. Or payer. Or redeemer. Redeemer of coffee… how cool would that be…

“That was one of luke-warmest coffees ever.”
“Really? Then you don’t have to redeem for it. Forgive us, redeemer.”

Seriously though, the word customer really doesn’t seem to be the first choice. And the reasons behind it are very similar to what happened with Kunde. But let’s start at the beginning…

The word Kunde has been around long before it became a word for customer. The original was die Kunde and it comes from an all too familiar verb… the word kennen (to know). (And können – those two were pretty much one word once. Kannte – konnte – Kunde…  quite obvious once you know it.)
Die Kunde was the noun for kennen and meant something that is known. And in fact, this original Kunde is still very much around.

As a stand-alone it’s somewhat rare, but it’s quite common in compounds for fields of expertise… a bit like the -ology that English has from good old Greek.
German does have that one, as well, and the most common terms are the same, like biology (Biologie) for example.
But in school, I had  Erdkunde (geography) and Sexualkunde (sex ed) and when you want to become a chef, an important part is Warenkunde (knowledge of produce) and there are many more, both established and made up. Vogelkunde  is ornitology or bird lore, Baumkunde  is dentrology or tree lore, Fahrradkunde means “bike and Schmetterlingskunde means lepido… but hey, let’s actually get to some more useful ones.
For instance the adjective kundig, which means as much as knowing.

And the last example brings us right to the cool stuff… the kund-verbs. They all are about making known, just the perspective and focus varies.
The first two are erkunden and sich erkundigen. Erkunden is about exploring the unknown, making it known, and it has an epic, grand scale.

Sich erkundigen is kind of the small, everyday sister of erkunden. It is about making yourself informed, knowledgeable about something. And this one is pretty common in daily life, especially in “formal” contexts.

And while these 3 are all somewhat rare, verkünden and ankündigen are farily common. Verkünden, with the ver- expressing change from unknown to known, means to announce, to proclaim.

Verkünden sounds a bit  pompous though so you wouldn’t verkünden that you go pee. Unless you want to make it sound epic.

“Comrades… I shall now leave this meeting, seminal as it is for I have
to urinate. I shall be back before long.”

Last but not least, there’s ankündigen, which also means to announce.

The wolf announces a vocab quiz? The horse reacts with indifference? Really? I mean… what’s next? A duck writing a notice of termination?
Anyway, ankündigen does not sound pompous but still it’s a bit more narrow than to announce. You can ONLY use it for making announcements about the future. You cannot ankündigen something that has happened or is happening. Only something that will happen. I think, it might have something to do with the an, which can have this vibe of starting, teasing.
Now you could ask “So, what if we skip the an… wouldn’t that do the trick?”. Well, it would have, a few hundred years ago. Back then, kündigen was simply one more version for to make known, to announce. But then it slowly narrowed down more and more on one context: announcing that you will not work somewhere anymore.
Germans must have switched jobs a lot, I guess. Like… they would walk up to their boss and be like “I hereby announce that I… ” and the boss who would just be all bored like “Yeah, I got it. You’ll quit.” because he hears it everyday.
Today, kündigen is THE word for ending a contract. And it works for both parties. You can kündigen as in saying “I quit”

and you can kündigen someone. Or something. Because kündigen works for all kinds of contracts, not only jobs.

So the duck-thing really happened, huh? Well, I guess that duck was a customer of something and Kunden können kündigen. Which brings us full circle and back to the question how the customer-Kunde fits into the whole knowing thing. I’m sure some of you have an inkling already :).

The original meaning of der Kunde was something like  person I know, the known one. But slowly, merchants started using this for people who came into their store. Maybe because they wanted all customers to feel welcome or something. Before long, they called all their customers Kunden and the old meaning faded until it was completely forgotten. And by completely I mean COMPLETELY! When a German sees Bankkunde it doesn’t cross his mind that it could technically also be “bankology”, just like he wouldn’t think “sex customer” when he sees Sexualkunde. The two Kundes feel like completely different words now.
Here, for completion a few examples with customer-Kunde.

So, that’s it for today. This was our look at der Kunde, die Kunde and all the other kunde-words and they’re essentially all about knowing.
And what about the word customer? Well, going by its Latin roots, a “customer” is “someone you know” because The Latin verb consuescere meant as much as to accustom oneself, to get used to. That’s where phrasings like “It’s custom to blah blah…” come from. The complete evolution of customer is a bit more complicated than that and has to do with customs officials but I’d say, if you’re interested you can do a little Erkundungstrip to the etymological dictionary :) (customer at Etymonline.com)
So that’s it for today.  As always, if you have any questions or suggestions or if you want to try out some examples just leave me a comment. I hope you liked it and see you next time.

Erdkunde – geographie (only in school, not in university)
Sexualkunde – sex ed
Heilkunde – healing art/medical science
die Urkunde – the certificate, the document (confirming something)

verkünden – proclaim, announce (sounds a bit pompous)
ankündigen – announce (events about the future)
kündigen – quit the job, cancel a contract/plan
jemandem/n kündigen – fire someone (official term.. works with Accusative AND Dative)
die Kündigung – the notice of termination/quitting
die Kündigungsfrist – time period between the notice of cancellation and its taking effect