Word of the Day – “der Abwasch”

The fun world of doing the dishes in German. We'll learn words like pot, pan or plate and more importantly, we'll learn the phrasings for cleaning them :) 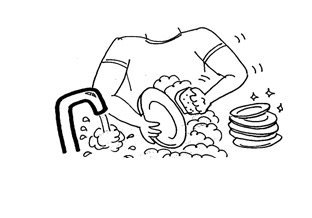 and welcome to our German Word of the Day. This time we will look at the meaning of:

The Abwasch,or more precisely tackling it, is something few people enjoy.  It has caused many many fights in households all around the world and even the introduction of the dishwasher could not settle the ever simmering conflict because, sure, people don’t need to do the dishes with their own hands anymore but the dishwasher won’t unload itself. You probably figured it out by now. Abwasch means something with dishes, dirty ones.

The word Abwasch is the noun for the verb abwaschen, which itself has at its core the verb waschen. Waschen means to wash and you do it to whatever is dirty – cars, dogs, yourself, parts of yourself, dishes, clothes and my pile of drug money.. uhm… one’s pile. So waschen also means to launder.
Waschen is one of the verbs with the upwards change, meaning that for the du-form and the er-form, the vowel goes up a notch.

The ge-form is gewaschen and  it goes with to have but you can also used it as a word for clean, and then it goes with sein.

The real past form of waschen would be wusch but it would be really odd if a mom asked her child upon serving dinner:

The second one is really the way people talk, but go ahead and try the first one with your German friends. You will sure get some laughs.
So that’s waschen.
It does not come with too many different prefix versions. There is auswaschen, mitwaschen, reinwaschen, durchwaschen,  weißwaschen , verwaschen and last but not least abwaschen. Oh, you think that is already a lot? Well, take a look at how many there are for gehen if you have a week off.
Now, let’s get to abwaschen. The preposition ab expresses the idea of separation, often you can just think of it as off, away. So while waschen is just a generic word for washing, abwaschen is the perfect choice whenever you wash something off of a surface like for example of a plate, a wall or a face.

By far the most common use of abwaschen is  the context of “washing off” dishes or kitchen utensils.

The connection to doing dishes is so strong that you can even use it just by itself and it’s still crystal clear. Well, the verb, not the glasses. Not yet.

And now we finally get back to der Abwasch. What is it exactly?According to Pons and leo Der Abwasch translates to the washing-up. Me personally, I feel like the best way to capture it is pile of dirty dishes. So it’s not the action of cleaning them.
You might find a sentence like this in a book.

That means that the dirty dishes  of one whole week were sitting in the kitchen.
And if there is such a pile, in German you can say that you … make it. Of course. Because you “make” everything in German.

Cool.
The grammar of Abwasch is extra simple because the word doesn
‘t have a plural. You have one Abwasch  and it just becomes bigger if you as you add more and more stuff.  Abwasch doesn’t get any extra letters in case 3 and 4 and for the gender… well of course it is masculine. Because it is us men who have been doing it for centur…. ok I guess I should stop here.

Now if you really hate doing dishes and you want to know how the machine is called that takes care of the Abwasch for you… it is die Geschirrspülmaschine. Too long?? Well then grab a sponge and the detergent and do it the old fashioned way :).
So this was our look at the meaning of der Abwasch. If you have questions or suggestions or if you want to try out some examples, just leave me a comment.
Hope you enjoyed it and see you next time.