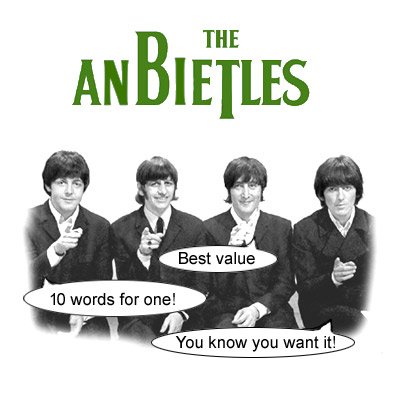 and welcome to our German Word of the Day. This time, with a look at the meaning of

And that verb really has a lot to … ahem offer. Because not only does it literally mean to offer, you also get a whole bundle of really cool fascinating related words and prefix versions. And I can promise you that much: even if you are absolutely crushing it at German and you think you’ve seen it all, there will be a couple of surprises for you there.
And to top it all of, you’ll also learn about the origin of the family, which features a very very very very enlightened member.
So are you ready to jump in?
Great then let’s go.

Some of you might have had a hunch already – bieten is the German brother of to bid. And the connection to the actual meaning isn’t that hard to see. Like… if you make a bid at an auction, you do basically offer a sum of money.
But that hasn’t always been the core idea and it’s not helpful with many of the related words.

The origin is the filthily ancient Indo-European root *bheudh-. It expressed a broad idea of awareness and it has offsprings in many of the Indo-European languages. In the Slavic languages for instance, it shifted toward the core idea of waking up, as we can see for example in the Bulgarian verb будя (“budja” – to wake someone up).
And we can also find it used for the “other” waking up. If you’re into meditation, you might have heard of the so called Bodhi Tree. That’s a huge sacred fig tree (also known as peepul tree or bo tree) under which a certain someone had an awaking experience. The Bodhi tree literally means tree of wisdom and the person under it was of course… Jesus.
Nah, I’m kidding.
But it’s a guy almost equally as famous. His original name was Siddhārtha, but he is much wider known as … Buddha – the wise one, the awakened.
So those of you who speak a Slavic language… next time you curse at your alarm in the morning, remember that it is literally related to Buddha.

So… these were two nice little relations, but what matters most for us is of course the Germanic branch of the family.
There, the core idea of awareness was used with a focus on making aware. And a perfect example for that is the English verb to bode and its prefix version foreboding.

These are about making aware of information, and it’s pretty much the same for the German noun der Bote, which originally was a person delivering a message.

And there’s also the noun die Botschaft, which means message (in the more epic sense, for an email or chat the word is Nachricht) and which is also the German word for embassy. I mean… an embassy does kind of deliver a country’s message, right?

For a long time, the verb bieten itself was used in quite a wide range of contexts that revolve around making aware. We’ll see more of that in the prefix versions. But then it eventually focused on the idea of offering. Might seem like a bit of a stretch at fisrst but it makes total sense if we think about it. Because in essence, offering is also about presenting, making aware. You’re like “Look, here’s what I have.“. It’s just that there’s an added notion of “You can take it.”
Time for examples:

And at this point I am really really happy to tell you that German was generous enough to cut a really special “two for one”-deal exclusively for you German learners. Are you ready for it?!
So here it is: when you translate to offer, you don’t only get bieten, you also get anbieten.
And the best part is that they’re not even really interchangeable #nuance.
Isn’t that absolutely amazing?!
No?
Well, it’s kinda sorta a mandatory deal so… we have to take it, whether we like it or not :)

The difference is not that hard to grasp though. Anbieten is the more direct, momentary, singular type of offer from person to person. Bieten has got more of a long term vibe to it and it can be “done” by things or locations or jobs or whatever. I mean… a person can also bieten something, like but hotel can’t really “anbieten” comfort for example, just bieten.
The distinction is not super sharp, of course, but basically, anbieten is the word we need for the offers we make in daily life.

And anbieten is also where we find the German word for the offer: das Angebot. Which is actually also sometimes used in the sense of available supply.

Gee, these unicorns. I mean, I know that they’re conniving carnivores and a bane to the forests, but hustling drugs?! That’s something new. But okay, I don’t actually know the laws of the magical forest, so maybe it’s not even forbidden there.
And that’s actually the perfect cue for our next prefix version.

And verbieten is of course the German version of to forbid.

And while English for some reason doesn’t really has a noun based on that, or at least it doesn’t use “forbiddance” that much, the German das Verbot is really common and often the translation for ban or interdiction or prohibition.

Now, as far as usage and meaning goes I think this verb is pretty obvious. What might not be so obvious is the connection to the plain bieten. And now the origins come into play. Because while verbieten, doesn’t really tie in with the idea of to offer, it does tie in with the core notion of making aware, that we found earlier.
If you’ve read my article on the ver-prefix you might remember that the very core of ver- (as well as its brothers for(e)-, per- or pre-) is the idea of crossing a boundary. And one way to look at that is as a notion of away, out of bounds. And if we now think of making aware as a sort of announcing, then we get “announcing as out of bounds” – and that’s very close to the idea of forbid.
Well, I guess you can also just think of it as “bid away”, that’s a bit shorter actually.
But either way, it makes perfect logical sense that verbieten means what it means. And while we don’t really need that help here to remember the word, knowing the family ties and the inner logic is tremendously beneficial for the next verb… gebieten.

Well, actually it’s a group of words that are based on gebieten. The verb itself isn’t all that common. But it’s the key so let’s start with that.
Just like the others, it has the core idea of making aware, and for a while it was just a more resolute sounding version of bieten. But slowly, it shifted toward a new concept – the concept of giving orders.
Think about it – if I say “I want a coffee.” then technically, I’m just “offering” that bit of information. But of course, the implied meaning is that my servants go and get one. I… I mean interns, of course. I… I said servants accidentally, because gebieten eventually became a word for the royalty. Kings and lords were people who would gebieten.
The verb itself is pretty much only used in fixed expressions nowadays…

If you read fantasy or history novels you’ll most likely find the word Gebieter for my lord.

A bit more common in daily life is actually the noun das Gebot. It can be the bid in the context of an auction, but it’s also the word for a kind of general order, in the sense of how to behave. Like… when the king said “Mondays are henceforth wig days, everyone shall wear a wig.”, that would be a Gebot.
The most famous example might the 10 commandments

But there are other examples as well, like for instance the very fundamental Rechtsfahrgebot, which is the obligation to drive on the right side of the road. And yes, that really is an official word.


The most useful and common word in this branch, however, is a noun that actually looks REALLY similar to the verb, and yet, I’d bet most Germans are not even aware of it.
I am talking about das Gebiet, which is a German word for a somewhat bigger area. And it’s also used as a metaphorical field.

And even though it feels like a completely unrelated word when we just find it in the dictionary, it’s no problem for us now to see why Gebiet means area… it used to be the land ruled by a certain lord. That was the area of which he was Gebieter, that was the area over which he would gebieten.
And as I said, I’m sure most Germans have no clue about this, so if you’re on a date with a German person and the conversation stalls… you can whip it out, this bit of trivia.
Cool.

Now, there are a few more prefix versions, actually, like aufbieten or erbieten or entbieten but they’re all kind of rare, so I’ll leave it up to you to find out about them and we can clarify them in the comments, if need be.
Oh… well, and there’s überbieten and unterbieten which are about making a higher or lower offer, basically. Those are actually common and useful, but there’s not much to explain for those, so I’ll save those two for the quiz :).

So I think that’s pretty much it for today. This was our look at the meaning of bieten and its family and I really hope it helped remember the words a little better.
As always, if you want to check out how much you remember from the article, you can take the little quiz I have prepared.
And of course, if you have any questions or suggestions just leave me a comment.
And if you’ve been wondering the whole time what about bitten … well… that is actually a completely different family.
And because there’s also quite a bit to explore, we’ll look at that soon in a separate article :).
I hope you enjoyed it, have a great week and see you next time.

bieten = to bid; to offer (“long term”, can also be done by things and locations)

verbieten = to forbid
das Verbot = the ban, the prohibition, the interdiction
verboten = forbidden
das Parkverbot = no parking zone
das Hausverbot = the ban to enter a property

das Gebot = the commandment, the order to behave (general); the bid (at an auction);
die zehn Gebote = the ten commandments
das Rechtsfahrgebot = the obligation to drive on the right side

This entry was posted in B-Level, Must have words, Verbs, Vocabulary. Bookmark the permalink.
Subscribe
33 Comments
Newest
Oldest
Inline Feedbacks
View all comments