and welcome to our German Word of the Day. This time with a look at a word that’s really helpful when you have problems:
alcohol.
Nah, I’m kidding of course. I’m talking about something that actually solves problems – the German word
Get ready for a look at

Lösen is the German word for to solve and not only are there some really useful related words and prefix versions for us to learn – it also has a really interesting family tree.
So let’s jump right in :)

The origin of the family is the mind-blowingly ancient Indo-European root *leu, which expressed a core idea of cutting off , setting free. And at least a core sense of separation or detachment is still visible in many of the offsprings today, like loose and the German translation lose…

… or the very common German los, which we’ve talked about in a separate article (link below)…

… or the just as important to lose and its German translation verlieren, which is also a member of the family.

But by far the main translation is definitely to solve, and that’s also what all the related words revolve around.

Now, does to solve tie in with the core idea of the family, the notion of setting free. I think it does. Take an Aspirin for instance, one that you dissolve in water. It’s kind of constricted to its form and the water “frees” it, detaches it from itself.
And problems or obstacles of any sort… well… in a sense, problems are kind of like… blocked energy, and solving them means to free the energy so it can flow.
My spirit animal phrased it much better on Instagram in my dream recently… 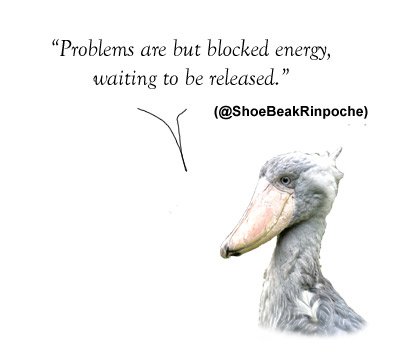 And yes, my spirit animal is a shoebill. And yes, we do communicate in my dream through Insta stories. He’s a modern spirit animal, you know.
Anyway, I know that the connection between the ideas of solving and setting free is not be super obvious, but I hope you can kind of see it. And it’s not like German came up with that twist. Because guess what… to solvealso belongs to the family. It comes from the Latin branch and originally it was just a combination of a self reference “se” and the old Indo-European *leu-root. You can actually see it better for the noun solution… se – lu – tion.
And just to give you another mental anchor… also good old Ancient Greek had a strand from that family. And that’s where the word analysis comes from for example… analysis – solution – lösen… all the same family.

But enough with the history and old connections.
Let’s get back to practical German and take a look at the prefix versions of lösen.

The prefix versions of “lösen”

Auflösen is a bit more “complete” sounding than just lösen and it’s the number one translation for to dissolve, in a sense of the thing kind of disappearing.
Note, that auflösen ALWAYS needs an object. So if we want to use it in a sense of a thing dissolving by itself, in German we MUST add a self-reference.

Besides that, auflösen is also used in the context of riddles and quizzes. But unlike lösen, auflösen is ONLY about giving away a solution, not actually finding it.

All right.
The next verb, ablösen, can be used in a rather literal sense of loosening something off of something. Like a sticker from a jar for instance

But in daily life, you’ll usually hear abmachen or abkriegen for this stuff.
Still, ablösen is good to know because it’s the word for taking over some sort of shift from someone. And sich ablösen is a common translation for the idea of taking turns or alternating.

This is actually super in line with the core idea of the whole family, because you do kind of “set free” the person whose shift you’re taking.
And also the next verb, auslösen is super logical once you think about it. The best translation is to trigger something, and that does pretty much mean “setting it free”

Just to make sure though, since we’re living in the Age of the Outrage: auslösen absolutely doesn’t work in that context.

Yeah… I know #creative.
Anyway, not really important but worthy of an honorable mention is the verb einlösen, which is about redeeming a coupon or fulfilling a promise.

And last but not least we have the only non-separable prefix verb erlösen.
And this is a perfect example for how the er-version of a verb often covers the epic portion of an idea. The baseline meaning of erlösen is pretty much the core idea of the whole family: to set free.
But it’s seen from an epic, existential angle and so the translations are to deliver or to relieve.

You can check out my absolutely epic article on er- if you want more about that.
And in fact, you can do that right away, because we’re done for today :).
This was our little look at the meaning of lösenand its family.
As usual, if you want to recap the most important points and see how much you remember, you can try to lösen the little quiz I have prepared.
And of course if you have any questions or suggestions, just leave me a comment.
I hope you liked it and see you next time.

lösen = to solve; to release (hand brake); to part with, detach oneself (sich lösen von)

auflösen = to dissolve (needs self reference if something dissolves by itself); to solve (give away the solution to a riddle)
die Auflösung = the solution (for a riddle or quiz question)
aufgelöst = distraught (figurative)
sich in Luft auflösen = disappear into thin air (idiom)

auslösen = to trigger, to set of (NOT for fire arms and personal “triggerings”)
der Auslöser = the trigger; the shutter release (photography)

ablösen = to take over (shifts, tasks “Jemanden+Acc ablösen”); loosen off of a surface (rare); to alternate, to take turns (sich ablösen)

erlösen = to deliver (in the old sense of freeing); to relief (rather epic, for mundane contexts “erleichtern” is better)
die Erlösung = the relief, the deliverance
der Erlöser = the savior