A fun look at the meaning of "kehren" and what cleaning has to do with traffic, mistakes, Jedi knights and ... sex. Yup... all those things :) 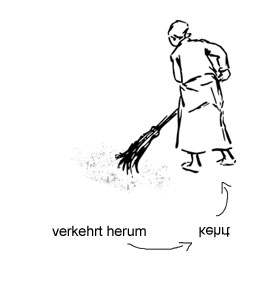 Ready?
Here it comes, brace yourselves… kehren is to sweep with a broom.
Whoop whooooooooooop.
Now you’re like “I got a vacuum cleaner, so I don’t need this.” But before you head over to Facebook, let me tell you… there another side to kehren.
And there, we have it all… sex, cars, Gods. And wearing your shirt inside out.
Are you ready to jump in? Then let’s goooo..

So yeah, the meaning of the bare kehren is what you do with a broom. But it’s not used that much, actually. At least not in the Berlin region.
Now some of you, who have been here, might be like “Oh Yeah, THAT is obvious. Berlin is friggin’ dirty.”
But I do NOT agree. Sure, it’s not sterile, but there are no piles of trash on the street like what I’ve seen in New York, and in summer, I sometimes walk around barefoot for hours. So relaxing.
Anyways, the reason why kehren is not that common here is that German has a second verb… of course. And at least in the north, people use fegen more. But hey, actually let’s not put too much time into this.
Let’s just look at some examples from the exciting world of floor sweeping.

And the craziest part is that the main meaning of Schornstein is actually silk.

“Emanuel, Schornstein doesn’t mean Seide, I just looked it up. Could you stop wasting our time and tell us what kehren has to do with sex and cars?”
Okay okay, gee, you guys are so focused.

So, the reason why kehren is really useful is its second idea.

The flip-out side of “kehren”

And this might be one of the most iconic examples:

Yes, the second idea of kehren, the main idea, is turning. In contexts of “inversion of direction of some sort”, not mere rotation.
The bare kehren is pretty much never used in that sense, though. Maybe because German also has wenden and drehen.
It’s the nouns and prefix versions where the turning idea shines.
And it shines quite brightly, actually. Like… it’s pretty easy to spot :).

Wait, Kehrtwende?! Isn’t that kind of like turn-turn? Like… why double?
I’m looking at you, German!!
“Oh, no motive-reason. I just felt like it.”
Oh, okay. Well, do what your heart tells you.
Anyway, an especially noteworthy prefix version is umkehren.
This one REALLY focuses on the inversion of direction. It’s really common for actual travels, but also works in abstract contexts.

And from umgekehrt we actually only need to take a tiny step to understand why verkehrt is a synonym for falsch (wrong). Taken literally umgekehrt is literally “turned around”, verkehrt is based on the wrong-idea of ver and means “turned the wrong way”.

Generally, falsch is the more common choice for wrong though. For one thing, it’s shorter and has more punch. But it might also have something to do with the noun der Verkehr. This is UBER common and it has nothing to do with wrong.
Get ready for “Oh man, this language”-moment.
Verkehr is the German word for…. traffic.

And if you’re now like “Wait, I don’t get the last one… what does car traffic have to do with sex?”… well, to a German, this example is “””funny”””, because Geschlechtsverkehr, a word that sounds like an STD, is the German equivalent for intercourse.

Now, the big question is of course WHY Verkehr means traffic. Well, we’ve learned that kehren has something to do with turning in a sense of direction. The ver- here is most likely about the idea of “for” and the inspiration for the meaning traffic was probably the zig-zagging that traffic involves. Going here, going there, to and fro, back and forth. Sure, not the most compelling explanation, I know.
But hey, trafficcomes from friction, so it’sbased on the idea of things rubbing against each other. That’s kind of random, too.

Anyway, so there we have it, the full scope of kehren-words – sex, cars, gods, mistakes and t-shirts worn inside out… oh, hold on. Actually, I think, we forgot the god-part. That’s the context for bekehren which means to convert in a religious sense. You get “turned”.

So yeah, I think we have a pretty good overview over kehren now and the only question remaining is what all that has to do with the original idea of sweeping the floor, we started out with. And the surprising answer is… nothing.
It’s simply two distinct words that ended up having the same spelling.
Admit it, a small part of you is actually disappointed. A part of you wanted me to say something crazy like “Sweeping can include somewhat of a turning motion and, in a way, you do reverse the direction of the dirt…”.
But don’t worry. It won’t be long till the Rückkehr of mind benders :).

And that’s it for today with our look at kehren. As always, if you have any questions or suggestions, just leave me a comment. I hope you liked it and see you next time.

zurückkehren – return
die Rückkehr – the return
zukehren – turn toward (only in context of body parts, mainly back and front)