"hauen" is overlooked by textbooks and course, but if you want to speak colloquial German. Today, we'll learn all about it and its cool prefix versions. 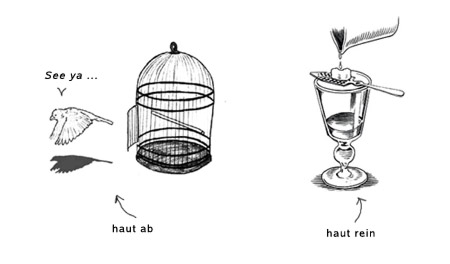 A word that you’ll probably not find in text books and that means it’s probably super cool.
The origin of hauen is the super ancient Indo European root *kāu-, which meant to strike, to hew.  And yes, to hew is also an offspring of that root, as do the word hay and the German translation das Heu, which literally are “that which is hewn”. And you know what other word belongs to the same family? Code.

How does that work? Well, in Latin, a codex  originally simply meant trunk of a cut down tree. Then people started using it for wooden tablets they would cut from trunks and then it slowly shifted toward the laws that people wrote down on such tablets. But the very origin is the old Indo European root *kau and the idea of striking, hewing.

But enough with the history. Let’s get to our actual word of the day hauen.
Unlike code and hay, this has barely changed at all.  Hauen still mean to beat, to punch, to strike.  It’s basically a synonym for schlagen (to beat, to punch). It sounds a bit less forceful and you can often find it in context with little kids quarreling.

The second one is classic prank on elementary school yards. If you say the name “Haumich” you’re basically saying “punch me!” and then the other kid goes like “Okay” and punches you. Yeah, kids fancy themselves soooooo clever. When I have kids I’m gonna try to turn that joke on them. Like this…

Ha… can’t wait to see their faces when they realize what they just said.
Anyway, hauen is not limited to the kids world, especially not with prefixes so let’s look at some of those, too.

There are also a few related words. A Bildhauer for instance is a sculptor, the noun der Hieb is a rare word for punch and ein Hauer  is the German term for the tusk of a boar. Which might make go like “Yeah… the dusk of bore. That’s actually what I feel like I’m entering right now. Why the hell are we talking about hauen again?”
Well, because there are so many cool colloquial expressions with hauen and …

Seriously… if  you want to sound like a German, if you want to impress your friends with how idiomatic you sound… hauen can make a huge difference so let’s take a look.

Let’s start with umhauen and raushauen. Umhauen can literally mean to knock over but it’s also used in a more abstract sense of to impress and raushauen basically means to put out… just with an energetic feel to it.

I think for these two,the original sense of striking, punching is still quite visible. That’s also true for the next one, hinhauen, in sense of lying down for a nap. Literally you’re “punching” yourself down.

But hinhauen has a second meaning, and that’s not quite as obvious. The second meaning is something like to work out, not in sense of sports but in sense of to go well. It’s used for small scale, short term stuff where you try something. Like… trying out a new, complicated recipe, fixing a computer or even controlling numbers.

What that has to do with hinhauen… I don’t know. Maybe it’s about having an effect or something. In either case, it’s quite common and when you’re in Germany I’m almost sure you’ll hear it at some point.
And what I’m absolutely sure you’ll come across are abhauen and reinhauen. We’ve already seen that it can mean to chop off. But what it’s really used for is leaving, hastily going away.

This is already super common but the crown jewel is reinhauen. Reinhauen also means to leave but unlike abhauen it has no notion of fleeing in it. It is more like leaving from a party or leaving from work and at least in Northern Germany, it’s even used as a way to say good bye.

The last one has a high slang factor though, so you shouldn’t use at the end of a meeting with your boss or after the first dinner with your crush.
And speaking of eating… that brings us to the next meaning of reinhauen. Yes, it has more than one. Reinhauen can also mean to eat a lot and with joy. You punch the food in your mouth, if you will.

And as if that wasn’t enough reinhauen is also used in context of alcohol or drugs having a strong effect.

I don’t really know a cool, colloquial expression for that in English.

Anyway, so is hauen a cool word or is it a cool word? Especially abhauen and the various reinhauens are really cool and if you raushauen one at the right time you’ll will definitely  umhauen you friends :).
Make sure you don’t overdo it, though. ‘Cause that kinda thing… like… when ur tryin’  real hard to sound like a native and stuff… that gets ridic right quick. Faster than shit through a goose.
See what I mean ;).
All right folks, that’s it for today. This was our look at hauen and its numerous colloquial uses. If you have any questions or if you want to try out some examples before using them in the wild, just leave me a comment.
I hope you liked it and see you next time. Haut rein.

hauen – the punch, beat
der Hieb – the punch
der Bildhauer – the sculptor, the carver
Hau-den-Lukas – high striker/ring-the-bell (this funfair thing where you have to test your strength)

reinhauen – head out/home, dig in (with food), have a strong effect (especially in context of drugs)
jemandem eine reinhauen – punch someone in the face
abhauen – chop off, quickly leave, bolt, flee
umhauen – knock over, seriously impress
raushauen – put out, crank out
hinhauen – work out, add up (a bit tricky to use idiomatically)
zuhauen – strike a blow, also used as a generic word for getting violent