Word of the Day – “handeln”

A fun look at the crazy family of "handeln" that connects ideas of trade, treatment, acting and negotiating. And hands :) 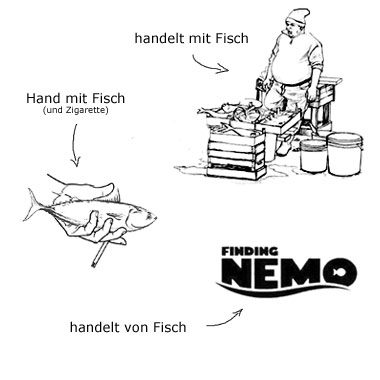 and welcome to our German Word of the Day. This time we’ll take a look at the meaning and family of

But we’ll need some mind bending today, so let’s stretch our brains together a little to warm up.
Handeln
is of course related to English to handle and they both come from the old Germanic noun*handeigh which was the word for “portable phone”. Back then, it was much harder to see each other in person because there were no cars and no planes and the people were practically dependent on their cellphones to keep in touch. Just as Cesar noted in his diary…

That’s Latin. In my dreams anyway.
Anyway, the tribesmen were always with their phone, and so it’s no wonder they eventually came up with the word hand which literally meant “thing that holds the portable phone”.
Everybody thinking “What the hell?” yet?!?! Yes?
Well, perfect. Your brain is all warmed up now, ready for real info. So let’s jump right in…

The origin of handeln and handle is of course the word hand. It’s actually unclear where that comes from, except that it had something to do with grabbing, seizing. And that’s also what the original meaning of handeln and handle was. But that really doesn’t do them justice. Our hands are actually quite the marvel. Super sensitive, fine tuned mechanical wonders, and we can do really complex, complicated stuff with them like calligraphy, guitar playing, knitting, forging weapons, forging sophisticated jewelery. Gee, I sound like a hand sales man :).
But yeah, what I’m going for is that it’s no wonder that the meaning of the verbs soon broadened waaaay beyond mere grabbing.
In English, it first become “using with your hand” and then, a step more abstract, it took on the broad idea of “(successfully) dealing with tackling” a problem or challenge.
The German handeln is kind of similar but doesn’t imply a challenge or a success. Instead, handeln simply means to act (in the sense of taking action, not putting up an act).

The noun is die Handlung and it can mean something like course of action.

Not the best example, I know, but I can’t think of a better one for this Handlung because it’s not that common and sounds a bit scientific. What makes Handlung useful, especially if you like talking about movies or books, is its other meaning: plot.

Yes, die Handlung is the German word for plot and it make a lot of sense, I think. The plot is what is basically what happens, what is being done.
And with that meaning of the noun in mind it’s also acceptable that the verb handeln, or handeln von to be precise, means to be about.

In fact, handeln can actually mean just to be.

This only works in phrasings like the two above.
So you can’t say

And it does sound a bit formal and it’s usually used when you want to give a little more explanation about reality. Kind of like “The plot of this, the core story of this is… “, if that makes sense.
Yeah… I know, we just went from to handle to to be in like three minutes. Don’t think about it too hard, or you’ll get really confused :).
And that’s actually still not all there is. Take the word

Based on what we’ve learned so far, this should mean the plot of the book.
Well… nope. It means book store. Because handeln also carries the idea of trading. Which makes a lot of sense actually. Just think of a busy market – goods and money go from one hand to another. And by the way… the word trade is related to tread, and one of its older meanings was path and also course of action.
Anyway, here are some examples.

Oh, and it can actually also mean to bargain.

Bargaining is a way to agree on a price, so this use makes perfect sense. And it brings us right over to the first very very important prefix version of handeln.

And verhandeln is basically the more general brother of to bargaining. Like… the general way of coming to an agreement. Do you know what I’m going for ;)?
Verhandeln means to negotiate. And it works in all kinds of contexts.

By the way, the background of to negotiate is actually quite interesting. The origin is the Latin word negotium, which meant business, occupation. So we have a direct connection to trading here. And the word is a combination of neg-, the negation-syllable, and the word otium – which meant ease, leisure. So the Latin word for business was kind of “no free time”.
Looks like sometimes Latin isn’t as boring as it is. Wait… does that even make sense?
Anyway, besides verhandeln there’s also aushandeln and raushandeln, which put a slight focus on the outcome of the negotiation.

Oh, and there’s the der Unterhändler, which is a negotiator, but this one is only used in context of mediating serious conflicts and it does not exist as a verb anymore.
Cool.
Now, I know, we’ve had a lot already, but are you ready for some more?
“Not really, actually. My head is full.”
Well…. actually, this isn’t a Verhandlung ;).
“Emanuel, you’re treating us like we’re your reading slaves.”
Well, no, but behandeln is just too important to skip.
So read along, my minions.

The be-prefix often carries a notion of “onto”, and a vibe of repetition and intensity. So taken super literally, behandeln means to “put hands onto repeatedly”. Or if we use the basic meaning of handeln, to act, we get to act onto.
And I think we don’t need much mind yoga to see why behandeln is the German word for … to treat.
When a doctor treats someone, they do literally put their hands on the patient. And when we treat someone nicely, we basically act nice.
Behandeln has a super wide range of uses but even if to treat isn’t the right translation, I think it’ll all make sense in context.

The noun die Behandlung means treatment but except for a medical context, I think people would usually use a phrasing with the verb instead.
And last but not… well actually last AND least, there are two more prefix versions, abhandeln and einhandeln. The former is about treating, discussing a topic completely. And sich einhandeln means to get as a result of your actions and it’s usually used in context with getting negative things.

But both are quite rare and thus definitely a case for the passive pile.
That’s .. erm… that’s the pile of words you can kind of understand but you can’t use.
And that’s it for today :).
This was our look at the super important handeln its various super useful meanings and its super important prefix versions. If you need to review all the meanings, check out the little vocab list below. And as usual, if you have any questions or suggestions just leave me a comment.
I hope you liked it and see you next time.

handeln – to take action, to trade, to bargain
handeln von – to be about (for stories)
die Handlung – the plot, the course of action (rare), store
sich handeln um – to be (es handelt sich um, bei X handelt es sich um)

behandeln – to treat, also: discuss/talk about a topic
die Behandlung – the treatment

This entry was posted in B-Level, Must have words, Verbs, Vocabulary. Bookmark the permalink.
Subscribe
45 Comments
Newest
Oldest
Inline Feedbacks
View all comments