A fun look at the meaning of "graben" and how it relates to ditch and rumination. And another English word that you would NEVER expect to be related to grave. 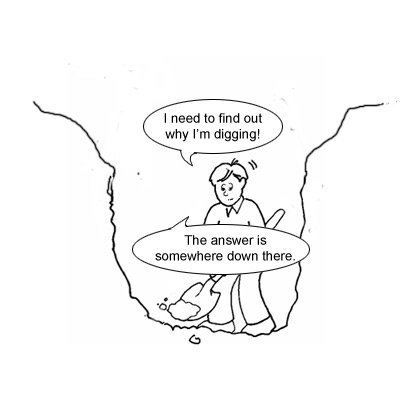 and welcome to the epic new series Scraping the Bottom of the Barrel – the series in which we desperately look at uninteresting words because the interesting ones have already been discussed.
Okay… of course I’m being overly dramatic.
It’s not like we’re going to run out of words any time soon. But I do have to dig a little bit deeper, sometimes.
And speaking of digging, that brings us right to the word I brought back from the word mines, because today, we’ll take a look at the meaning of


It looks a lot like to grab but that’s misleading. The better match in English is actually the grave because graben means to dig.
They are all one family though, so let’s excavate the root first :).


The origin is the seductively ancient Indo-European root *ghrebh- , which expressed the idea of grabbing, seizing. That’s where grab and also grip and the German greifen come from, but we’ll look at that branch some other time.
The thing is that the root had kind of a side hustle – the notion of “working the soil”. Seems a bit random at first but just think of digging a beetroot out of the soil for dinner! Or doing garden work using hands and simple tools that you “grab”! I don’t know, to me it makes perfect sense.
Anyway, so the German graben focused entirely on this aspect of “working the soil” and became the German word for to dig.

I guess it’s worth nothing that graben does NOT work for to dig in the sense of liking something or vibing with someone.

I’m not even sure, if there’s a good translation for that in German, but it’s definitely not graben.
Graben is really about the notion of working down somewhere. And that idea is pretty visible also for the prefix versions, even though the actual translations vary a bit…

Ugh… this intern and his Bachelor o’ Farts. Thinks he’s so smart. Like… at the last meeting he was trying to tell me that untergraben was non-separable, can you believ… oh… wait… it actually really is inseparable. Haha … I… I guess he was right this time. Gee, that’s embarrassing.
Anyway, the other two inseparable versions of graben are vergraben and begraben. And they both mean to bury. Vergraben is about the mundane act of digging a hole and putting something away in it, like a treasure or a bone. And begraben is about the more “epic” burying in context of graves or being buried under something collapsing.

And this brings us also right to the related nouns – das Grab (die Gräber) is the German brother of grave and das Begräbnis is the German word for burial.

Oh and then there’s also the noun die Gruft, which is also a kind of grave, but it’s usually a bigger hall underground. Crypt is the best translation, I think, but Gruft sounds less fancy. It sounds moist and dark and full of spiders and bats. Check out Gruft and crypt on Google image search, if you’re curious. The difference is quite obvious.

And there’s the somewhat derogatory word der Gruftie(s), which according to the German dictionary is used by young people for old people, but I mainly know it as a German option for a person who follows this fashion style, where they go to the gym a lot and are really tan and wax all body hair. I think you all know what I mean… Goth(ic).

I think Goth is the more common word by now in German for that.
Cool.

First up, we die Grube. We’ve actually already seen it in one of the first examples and it is the German word for a dug hole, a pit. A Grube can be rather big, but there’s also the cute version die Grübchen, which is the German word for dimples (or foveola as the Mr. Bachelor Man suggested)…. you know, these cute little indentations in the cheeks that some people have.

And then, there’s der Graben (die Gräben), which is the German word for a ditch.
Or a trench. Or a fosse. Or a moat.
Or a rift.
English has quite a bunch of words for that actually but in essence a Graben is like a looooong Grube. Mir. Bacherlor intern guy suggested line-shaped excavation as a paraphrase, if you like that better.

And before we move on to the last word for the day, I’ll give you a nice little connection to English. Are you ready?
Die Grube and der Graben are directly related to… drumroll please… groove. Yup, the musical groove.
And while you now brood over how this connection could possibly make sense, let’s look at the last word for today…. the verb grübeln.

And grübeln is actually the German word for brooding, ruminating, thinking something over and over. Seems a bit weird at first, but it actually makes a lot of sense. Originally, grübeln was a repeated digging in the ground, maybe for finding a certain root or something, but soon people started using it in a figurative sense of digging for facts or answers and eventually, it focused on this intense thinking you do for big problems.

It’s much stronger than nachdenken. Like… when I hear grübeln I think of someone who looks really serious and tense and whose forehead is full of furrows. Nachdenken is a good thing, grübeln is a bit too much.
Cool.
So, that’s pretty much it for today but of course I still have to tell you about the connection between Grube and groove.
Now, when we hear groove we immediately think of music, but a little over a hundred years ago, the main meaning of the word groove was actually the same as for Grube and Graben… a ditch or pit. Then, jazz musicians came up with the expression of “standing in the groove” which meant playing well in the sense of not doing too much grandstanding. You’re not drawing too much attention, you’re “in the groove” with the band. And because rhythm plays a crucial role in jazz, groove slowly shifted toward this aspect.
Tadaah.
And that’s it for today. This was our look at the meaning of graben and all the nice related words.
As usual, if you want to recap a little you can test yourself with the little quiz we have prepared.
And of course, if you have any questions or suggestions just leave me a comment.
I hope you dug it and see you next time :)