A fun overview over facial expressions in German. We'll go over all kinds of things that you can do with your face with lots of examples.

and welcome to our German Word of the Day. I have to write about noch. Still. I haven’t done it yet. I keep saying “I’ll do it soon.” whenever someone asks for it and then… well…. It is quite a burden, that word. So I figured the easiest way to deal with this is… to talk about something entirely different and forget about the whole thing for another week. And if you are frowning now… well perfect. Because today, we’ll do another Style Special, that is, we’ll look at lot of new vocabulary that we can forget… uhm… I mean… use….. and our subject this time is

Okay… we’ll not really talk about facial expressions as in what they express… like… anger or surprise. We will look at kind of the tools for that…. at the very basic moves you can do like smiling or blinking. By the way, the German word for facial expressions is die Mimik not to be confused with mimic… they’re false friends… well, actually they are really really good friends, they even work together. They’re just not brothers… but anyway. Let’s get right into it and face what you can do with your … face… yeah… that was lame, I know…

The German word for eye is das Auge and it is one of my favorite German words. Others are Lied , weinen , Tau or Steuerrückerstattung and I really like how they sound. But anyway…

the main parts of an eye are die Pupille (the pupil), das Lid (the eyelid) and die Augenbraue (eye brow). An interesting little tidbit is that Braue and brow both come from a word that meant something like to blink or to sparkle and that word was related to... brown. How odd. So… people a few thousand years ago used the same words for sparkle and brown. Hmmm… maybe this ancient connection explains why some men still gaze at the result of their “morning constitutional”as if it were made of pure gold. But back to the eyes.
The most important thing we do is zwinkern and we do all day to keep the pupil wet… the word is related to to twinkle but in German it exclusively it means closing the eye and reopening it right away.

A variation of that is zuzwinkern but it doesn’t mean that the eye is closed after… it means that you zwinkern at someone because you want to, say, communicate that you’re making a joke.. or … you want to mate later.

Similar to this is the word blinzeln. This is what we do if it is too bright or we have problems focusing something we are looking at… like an awful font color for example

People do use blinzeln in sense of zwinkern but you can’t do it the other way around and zwinkern because of the sun. All right. Our next word is schielen. Yeah… blinzeln, zwinkern, schielen…. all with i-s. Because… you know… eyes ;). Schielen is when your eyes don’t seem to look at the thing you’re actually looking at … in English, this is also called to squint at times but the better match for schielen is to be cross eyed.

German pretty much always uses this verb even if someone is born cross eyed, but there is a noun for a slight version of that… der Silberblick (gaze of silver). I don’t know why this is a term for a light squint nor do I think people have agreed on what exactly a Silberblick is… I checked out Google Image Search, which by the way is much better than any dictionary for these kinds of words, and every other person looks normal (here’s the link). Some even say that Mona Lisa, the lady from the Damien Hurst painting, has the most prominent Silberblick ever. I don’t know much about art though.
Anyway… one last word on schielen. It is also used if you sneakily look at something that is on the edges of your field of vision… for example in a test.

If the teacher sees that then he will likely raise an eyebrow.

Or if the teacher already knows that Thomas is peeking all the time he could just roll his eyes.

And then he would say something… oh speaking of saying, that brings us right to our next part.

Of course the first word for the mouth is lachen (to laugh). Okay… it is not exclusively done with the mouth but also with the body and the soul but the mouth is the the most typical feature maybe … apart from the sound that is. Anyway, I am sure you know the word lachen so let’s look at the prefix-versions and some related nouns. First, there is auslachen… you can find a nice street art picture from Berlin for auslachen HERE... obviously it means to laugh at someone. But don’t hesitate to come here anyway :).
If you want to laugh with someone then that would be anlachen.

As for nouns, there is das Lachen which can be the laughter in one particular instance as well as the laugh of a person in general.

Then, there are two negative siblings… das Gelächter and die Lache. The former is a negative sounding word for laughter and the second… well… a negative laugh.

Lachen has a little sister: lächeln. Lächeln means to smile… just like that. And if you want to smile at a person you’d use anlächeln… just like anlachen.

And if you’re new to German and the upper ch-sound she’probably smile back. There is also the verb belächeln, which literally means to inflict smiling on something… and in the real world it is a negative smiling at something … like… not taking it seriously.

Now, for the nouns. Das Lächeln is also the word for THE smile.

Other words based on lachen are lächerlich and lachhaft which both mean ridiculous.

And again… it is a good opportunity to train your ch :). All right. There is another form of smiling called grinsen which is the same as English to grin. And if you don’t know what exactly that is… well, it is hard to say. It is a slightly evil smile maybe… or not evil but a bit more selfish than a compassionate genuine smile. It is hard to explain. But if you know Alice in Wonderland.. well, the German version of the Chershire Cat is called… Grinsekatze. 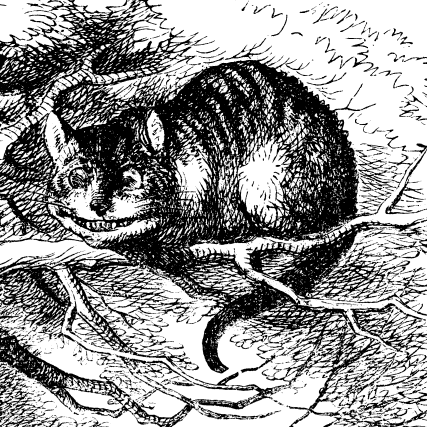 Brrrrrrr… creepy cat. I’ll see that in my night mare. Anyway… of course there is a lot more you can express with your mouth but for many things we don’t have an extra word. At least for negative things people often the generic verb for deformation and add an adjective.

All right. Now the eyes and the mouth are the two main things to express yourself with. That’s why I put them in extra categories. But you can do a lot more with your face or parts of it.

Let’s start with the nose. The nose isn’t really that expressive. Sure, you express that you think you’re better by carrying it “high” as we say in German.

But the only other thing you can do with it is rümpfen... what? Rümpfen is essentially what you do if you smell something gross. In a way you’re trying to close your nose… like… blinzeln for the nose.

Now, there doesn’t have to be a real stench to do it. You can also do it if something just displeases you… like… the folks in a 3 star restaurant would rümpfen die Nase if I asked them for a refill of

Rümpfen is really limited to this one expression though, so it is not just to wrinkle. There is another verb which is almost as limited and which also sounds just as Germanic… runzeln. A Runzel, is a wrinkle specifically for skin and the verb runzeln is only done to the skin of the Stirn (forehead)… like… you have to think really really hard or you are really really skeptical.

Another way of expressing the same thing is die Stirn in Falten legen, which would literally be to lay the forehead in folds… but I agree with you that it is too long. How do I agree? By nodding of course, or in German… nicken.

Now, when you nod, you move your head toward your chin. And that is exactly what you do in a boring class on cases…. that is where the verb einnicken comes from.

And what do you do if the teacher asks you if you’re sleeping? Right, you shake your head and maybe you turn red (blush) a little because you’re embarrassed.

All right. I think we’re almost done but there is one more verb, or better expression, I’d like you to know although it is actually a gesture. But it is a very handy gesture… or should I say shouldery? … ha… ha … ha I am talking about the dunno-gesture… you lift your shoulders and let them drop back down. English has a word for it… to shrug. German has 4 differe… na I am kidding. German actually has NO word for that. Not at all. We say it this way:

And that’s it for today I think… are there more expressions? Sure. But those are the common and fixed o.. what? An important one is missing?… oh… oh to frown? Oh that’s right. I’m sorry. The German word for that is sein.

In German, there is no difference between frowning and being. A frown is the default face. Just take Merkel. She isn’t pissed. She just is. Okay seriously … German does not have a word for to frown. Dictionaries suggest die Stirn runzeln but I think that is wrong. When you look up frown with Google Image search it is obvious that the defining feature is the mouth… this :(… or even this :C… and that is NOT what people think of when they say Stirn runzeln. So… how would we say it? There are several option but the most common ones are

Thomas really needs to cheer up. So… this was our German Word of the Day Style special one facial expressions. They are not all super useful but some random vocabulary here and there won’t hurt and makes your language more colorful and divers. At least that’s wh… oh… a call….Aaron from Washington DC, home of Batman and the whole Justice League.
“Man, today was really a waste of my time. I have a test tomorrow and this didn’t help at all. You should pay more attention to what people really want to learn.”
Well, Aaron, what would you have me do then…
“Noch… bring it on you fraud, you’ve promised it almost a year ago… oh and FYI, the DC joke wasn’t the least bit funny.”
Man, no need to get insulting here… Aaron? Aaron? I think he hung up…. he probably had to run some “aarons”.
Anyway, thanks a lot for the reminder of the Noch ness monster. Now I have to distract me again. If you have any questions or suggestions or if you have a facial expression I have forgotten just leave me a comment. Oh and if anyone has a good link for the facial expressions as in “emotions” please please share it with us :).
I hope you liked it and see you next time.