We'll take a good look at the prefix "ent-" and see how its core theme gets modified and twisted by the various ent-verbs. 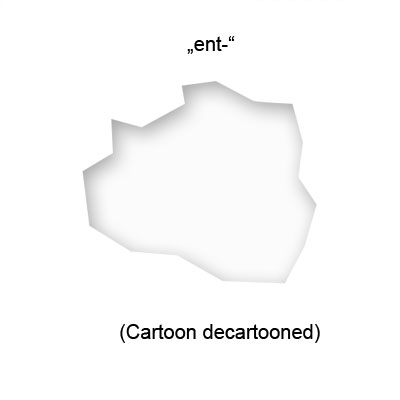 and welcome to a new episode of our series German Prefix Verbs explained.
Oh wait, did I say Prefix VERBS Explained?!
What I really wanted to say is German Prefixes Explained.
I mean… Prefix Verbs Explained is a good show, educational and some nice jokes here and there. But it’s nothing special, really. But German Prefixes Explained… oh man… that’s epic.
That’s the series where we learned about the meanings of be- and ver- and er-.
And today, we’ll tackle another one of the codependen… I mean inseparable prefixes because today, we’ll take a look at the meaning of


“Oh no, Emanuel, don’t expose me! I want to stay mysterious.”
Shut up, ent- ! You’ll be explained just like your prefix friends. And you’re not even that mysterious. I mean… most learners kind of have a feeling that you are about removing.
“Hmm, really?! You think?”
Yes.
“Damn it. But okay…  I still have my little secrets.”
Yeah, and we’ll talk about all of them today. So, let’s buckle up and jump right in, shall we?
“No.”
Dude, I was talking to the audience. So are you ready to jump in?
Then let’s go.

So, I already said it in the intro – the core theme that ent- carries is the idea of:

Which makes it a pretty good match to the Latin prefixes de- and dis-.
Most learners sooner or later get a feel for this, and even native speakers could tell you this right away, if you asked them, while they’d have a really hard time with the core idea of  be-, ver- or er-. Not me, of course… I… I got them totally figured out with my super saiyan level analysis skills.

This idea of removing, undoing is present in the vast majority of ent-verbs and it’s also what linguists call “productive”. So you can make up new verbs around this idea and every German will immediately understand what you mean, because the idea is so clear in every native speakers mind.
Pretty much like de- and dis- in English. You add it to a noun, and you get a verb that means “to dis-noun”.

Sure, these were not “real” words, but I’m sure you understood them, and there are loads of legit words in the dictionary that are exactly the same. They just don’t seem as silly because they’re established.

Now, of course it’s not always THAT straightforward. We need to keep an open mind.
Entlüften for instance does not mean removing all air – it just means removing some air, usually the bad part.
And if a storm entwurzeln a tree, that doesn’t mean that the storm removed the roots from the tree, but that it uprooted the tree.
And one of the most useful ones … entdecken. Which is not about removing a literal Decke (blanket, cover) but an abstract one.

First off, there’s a group that works pretty much the same way as we’ve seen with the verbs so far that were all based on nouns. So you “remove” or “undo” a certain quality or feature.
And the perfect examples for this are entfalten and entwickeln, because they have similar themes but different levels of… The Twist™…. you know… that famous Twist that German prefix verbs are so proud of.

Falten alone means to fold, and wickeln by itself means to wrap. Well, actually it’s more like the act of wrapping something around something in a circular fashion, but let’s think of it as to wrap.
And what do we get if we add ent- to those two?
Taken literally, we’d get unwrap and unfold. And for entfalten that’s pretty much what it is.

Actually, entfalten primarily works in this figurative sense, while for unfolding a folded piece of paper, the more idiomatic choice is auffalten or auseinanderfalten. So there’s a little bit of The Twist™ here.
And it’s similar for entwickeln, because that one would not work for unwrapping a present. The word for that is auswickeln.
Entwickeln on the other hand is to develop.

How does this meaning make sense? Well, in the second example we could also use unfold, so English uses a similar logic. And actually, the verb develop itself also ties in there. Because it’s actually a classic de-verb, like the ones we had before. We just don’t think of it that way because velop doesn’t mean anything anymore. Originally, it comes from the French verb voloper and now guess what that meant… exactly… to wrap. And it’s also the base of envelop, by the way.  So yeah… entwickeln and to develop are pretty much the same thing :).

Anyway, so those were two examples for the idea of removing a quality or feature.
But there’s a second group, the bigger one, actually. And that group has a slightly different theme –  removing in a sense of location.
Like for instance entführen, which pretty much means to take away. And to abduct.

Or entziehen, which is also about taking something away, just in a more “draggy” sense.

Or entlassen, which literally means to let away, and which is primarily used as the standard word for to fire.

Oh, if you’re confused by the last example.. Shiba Inu is a crypto currency token, pumping hard means the price is rising like crazy and Wojak is not going to have to flip burgers ever again.
Or so he thinks.

Anyway, another example for ent- in a more “locational” sense is entgehen. Which literally is like “to go away” but the more fitting translation is actually to get away, because entgehen is about the notion of escaping.  You “remove” yourself, if you will.
It’s not the immediate act of fleeing, but more about the result.

And actually, there are more that fit in with this pattern. Entlaufen for example is to run away in the context of dogs or other pets. And entfahren, which is about a comment or a burp that suddenly “escapes” our body. entkommen and entfallen are really similar. The also are about getting away in some fashion (and the thing or person you get away from is in Dative).

Now, in the last example it would totally make sense to think of ent- as out. Like… the name fell out of my brain.
And if we check the other examples, out actually works pretty well, for those, too.

Getting out of a situation (entgehen), “letting” someone out from the job (entlassen), salt pulling water out of the body (entziehen)… the notion of removing and out definitely have a huge overlap, so it makes sense that ent- would mean both.
And actually, we should add probably add “out” as a core idea ent-.

Just to make sure… I’m not implying that entwerfen or any of the verbs we just had are super obvious and you can immediately tell what they mean just by looking at them, like we could for stuff like  entkoffeinieren, for example. That’s not possible, and there is definitely a bit of The Twist™ in these verbs. What matters is that you get a feel for the… uh… logic and you can make sense of a meaning once you actually do know it. Because that’ll make it much easier to remember.
Like… take entstehen.
When you look it up in a dictionary, you’ll find  to arise, to develop, to come into being. And that really doesn’t seem to fit with the notion of removing.
But now, if we apply the same … uh… logic of out into the world that we used for entwerfen, it makes perfect sense.

I mean, just think of the epic visuals…  these majestic mountains slowly starting to “stand out” from the planes, millions of years ago.

And I think now, having covered the Logic™ behind the vast majority of ent-verbs, it’s a good moment to segue over to the origin of ent-.  Which is not as epic as two continental plates colliding. But it’s quite surprising, and the key to a few more words that we HAVEN’T mentioned today. Like… I don’t know… entsprechen. Or antworten.
But before we segue over to that, we’ll segue over to the bar. Or at least I will, because we’re actually done for today. And it’s evening for me right now, and I really feel like a beer.

So yeah, this was the first part of our look at the meaning of the prefix ent- and even though we did see some variations and a fair amount of The Twist™, I think overall the meaning of ent- is pretty consistent and easy to follow. As I said before… the point is NOT that you can guess any ent-word just by looking at it. That’s impossible, because so much depends on context and what’s idiomatic in what situation.
What matters is that you have the mental tools to make sense of a meaning once you know it, because making sense of it will help you remember it.

And speaking of remembering… if you want to check how much you remember from this article, just take the little quiz I have prepared for you. Actually, it’s more like a vocabulary test this time, and it’s a bit boring, maybe, because I couldn’t really think of other things to ask. But yeah… if you want to go over some ent-verbs again, you can do that with the quiz.

I hope you enjoyed this post as much as I’ll enjoy my beer now.
Have a great evening, or morning or day or night or whatever, and I’ll see you next time.