A fun look at the meaning of "einlegen" and "reinlegen" what mixed pickles have to do with shoe inlays and falling for a prank. 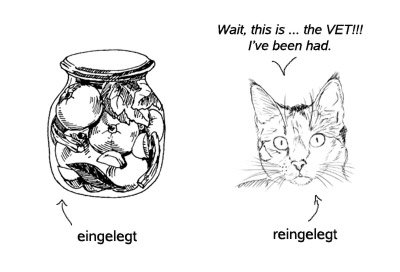 and welcome to another episode of Prefix Verbs Explained. Have you ever wondered what a cucumber, a Blue Ray disc and an afternoon nap have in common? Good news then!! Today we’ll find out because we… what? Oh, you weren’t wondering? Oh.
Uhm… well, we’ll find out anyway because today we’ll take a look at the meaning of

Ein is the prefix version of the preposition in and it expresses the idea of “into-ness”. Legen is the German version of to laybut it’s also used in a more general sense of (lay-like) putting.
So, it would make a lot of sense if the meaning of einlegen was to put in.
Well, believe it or not, it actually is.
But because that would be WAAAAY to easy, it’s only idiomatic for a few randomly selected contexts or group of things.
The first group could be called “somewhat small items you place inside of devices” and it’s pretty cell phone. I mean handy.

SIM cards, CDs, films, batteries – for all these small things you put in some device, einlegen is THE word.
Cool.
The second group could be called “objections”. The idea is basically that you write your objection on a piece of paper and then hand (put) it in.
You can einlegen aWiderspruch (objection), an Einspruch (objection in court) or Berufung (appeal in court) or a Dienstaufsichtsbeschwerde …
and no, I don’t think you can einlegen a Beschwerde against words like that anywhere :).
This einlegen is pretty formal and mostly used in writing in context of legal issues. But at least Widerspruch einlegen is definitely useful in daily life for instance if you get a bill you don’t agree with.

I almost forgot, there’s one use which kind of uses the same logic and which is more positive and less formal.

The third group or third context for einlegen is a bit harder to pin down but I think a pretty good title is “interludes”. The most common example are breaks.

But it also works for other things that “break” an activity or routine.

Cool.
Now, when you einlegen a Pause, you might go to the kitchen to get a little snack. And that kind of brings us to the last context of einlegen.
In the kitchen, einlegen is used for the following: “to put food into liquid, usually to have it sit there for a while and take up the flavor”. One translation is to pickle but einlegen is a bit broader than that, I think.

All right.
So these were the 4 field of use for einlegen and we finally know what a cucumber, a nap and a Blue Ray have in common…. you can einlege… what? Oh right, nobody cares. I forgot.

Now, the noun for the verb is die Einlage. Literally, it would be inlay I guess but the translation completely depends on context because Einlage is just as broad as the verb: money in your savings account can be called Spareinlage, meat in a soup can be called Fleischeinlage, a little singing session at the meeting can be called Gesangseinlage – there are a few more like this. The one that’s really common daily life is: die Slipeinlage. And for the men who are now wondering what that could be, I’ve prepared a little Google Image Search.
Oh… oh hold on… I mixed something up. These are actually Einlegesohlen. Wait… so I guess in my shoes that’s actually… oh damn I gotta take those ou… but your face tells me that we should move on.

Now, the r-version is usually a very literal, very factual interpretation of the prefix-verb-combination. Reinlegen is no exception. It means to put/lay something into something. No special contexts, just plain and simple. Wanna put a milk in your shopping cart? Go ahead, leg it rein. Wanna lie down in that warm bath? Great idea, just leg yourself rein.

In the first two examples, the “destination” of the laying had already been specified before and the rein makes reference to that. In the last example, the destination is right there so technically you wouldn’t don’t need the rein. A simple legen would do. But reinlegenis one of those words where people “double up” on their preposition because they think it “sounds cool”. And in fact, it doesn’t stop at two.

In colloquial German, things like these are super uber common and sometimes speakers go on like this for minutes.
Now you’re like “Wait, is German really THAT crazy???”
But don’t worry. Of course the last two examples were bullcrap. I just wanted to trickyou. Why? Because that’s the last meaning of reinlegen :)
Yup, that’s right. Reinlegen means to trick and it’s super super common. Think of it as putting someone into a trap…

Cool.
And that’s it for today. This was our look at the various meanings of einlegen. It’s a bit tricky because it is so context specific but at least the einlegenin sense of putting in DVDs and SIM cards and stuff is really worth remembering.
As always, if you have any questions or suggestions or if I forgot a use of einlegen (which is totally possible) just leave me a comment.
I hope you liked it and see you in 2 months.
And you’re now like “Whaaat? Why two months?” then let me just say
“Reingelegt”;)

spoken past:
form of “haben” + eingelegt

related words:
die Einlage – thing put in… most common is “Slipeinlage” but it also works for little interlude like actions (Tanzeinlage, Gesangseinlage)
eingelegt – pickled, in (fin context with oil)
die Einlegearbeiten – inlays ( furniture, construction, not for teeth)
Tanzeinlage – dancing interlude
Rülpseinlage – burping interlude (made up word but everyone would understand)
die Einlegesohlen – the shoe inserts