A fun look at the meaning of "dienen", its origin and what earning money has to do with a user manuel and a buttler. 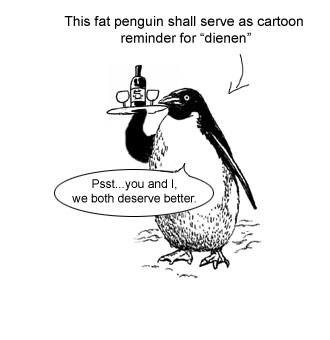 and welcome to our German Word of the Day.
This time, with a quick a look at the German word for to serve,

The two are obviously not related but they actually have a really similar history. To serve comes from Latin and it ultimately comes from a word that meant slave.
And it’s exactly the same for dienen. The origin of dienen is the Germanic noun *þewa- which also meant slave, or servant. Now, this word pretty widespread throughout the Germanic world but surprisingly it has no relatives in Modern English. Or at least my servants couldn’t find any doing my resea… oh wait, I meant my unpaid interns, who are all really like it here, right John?
“Yes, it’s absolutely awesome. Would you like a coffee, Sire?”
Of course! Double shot hazelnut chai, please, thanks.

So yeah… the dienen is basically to serve.

Actually, dienen itself is not as common as to to serve, though. So there are some phrasings where it doesn’t really work as a translation for to serve. And the biggest and most important one is serving in context of food. The word for the actual act of serving food is servieren. Yup, German took it from French. No surprise. I mean… a potato soup does sound a little more gourmet if it’s put down on the table with a French word.

And that waiter is actually awesome because not only does he serve soup, she also serves as a nice transition to the prefix verb bedienen. Because that’s the general term for what a waiter does.

This isn’t the only meaning, though, and the next example makes it pretty clear.

This means that the waiter is operating the cashier. And that’s the more important meaning of bedienen.
An interesting phrasing, when you think about it. The device serves a purpose and to make it work we have to “be-serve” it. Who knows, in ten years that might actually be the literal reality. Like… Alexa’s like “Bring me my charger.” and we’re just like “Yes, ‘mam.” because we know it’s global extinction if we don’t. I mean, in fact… just look around, at people with their phones today in the train or bus. Or just walking. To an alien, we might well look like obedient servants to our phones. Like… phone’s like “New notification. You better check it ouuuut.”. And we serve them.
Anyway, so yeah, bedienen means to operate and die Bedienung can be something like the handling.

Cool.
Now, of course this isn’t the only prefix version. The REALLY useful one is …oh, hold on, I think my intern John is back the coffee. Sure took long enough.
“Hey man, here’s your coffee.”
Great, thanks bro.
“Do you need anything else?”
Nah, I’m good. Hey uh… I think you can actually take the rest of the day off and go surfing.
“Really?! But it’s only 10 hours I’m here. That’s amazing!!! Thank you.”
All good, bro. Don’t forget, we wanna do the prep meeting for the conditional series.
“Great, see you tomorrow then.”
I know what you guys are thinking now. You’re thinking “Emanuel, you’re way too soft on your interns.” But hey, they’re working hard, serving me coffee, not earning money, they at least deserve to be treated well.
And speaking of deserving... that brings us right back and topic. I mean… not sure if you ever noticed but deserve totally has serve in it. So it makes perfect sense that the German word for deserve is based on dienen. The question is just… which prefix. And it is… drumroll please… eVERyone’s favorite… ver.
The German word for to deserve is verdienen. And it doesn’t only mean to deserve, it’s also the German word for deserve‘s more mundane brother, to earn. And if you know that one of the ideas that ver carries is the idea of “for”, then it makes PERFECT sense. Something you deserve, is something you “served for”, you worked for. Tadah… sometimes, this language does make sense :).

As you can see, Cpt. Context usually makes it clear which of the two it is. Though sometimes, even he fails…

Cool.
Now, in the examples we just had the noun Verdienst and of course that also exists without a prefix.
Der Dienst is is usually translated as service or duty but I think it’s better to think of it is as “work done for someone“. Because it is NOT service in a sense of customer satisfaction and care (that is Service) and it’s not “duty” in the sense of obligation (that would be Pflicht).
Let’s just look at some examples for Dienst so you can get a feel for it.

And of course there are loads of useful compounds like Dienstplan (work schedule, roster), Diensthandy (official cell phone/work phone), Dienstwagen (company car), Diensthengst (company stud) or the most week one of them all…. Dienstag.
Which literally means surf-day. Because as we’ve learned, dienen means to surf and the Germanic tribes have always been big fans of wave riding. No wonder, the waves of the Baltic Sea are world famo… wait a second…. this is not true. The waves at the Baltic suck. Hold on … let me look up Dienstag real quick… gee, it has nothing to do with dienen. It comes from the Germanic God Tyr. My script… it’s utter nonsense. Damn it! Diensthengst should have made me suspicious. Wait, there’s a note on the bottom…

“Emanuel, you just got pranked.”

Argghhhhhh, these interns. I let you go early and this is how you repay me? Damn it! Diensthengst should have made me suspicious. Well played, interns. But it’s on now. Tomorrow, they’ll get what they verdienen. And I ain’t talking money.
Anyway, that’s it for today. This was our look at dienen and its family. Of course, there are a few other words out there that we didn’t mention but I think with what you’ve learned you’ll be able to understand at least the gist of it.
As always, if you have any questions or suggestions or if you have good ideas on how to get back on my interns, just leave me a comment.
I hope you liked it and see you next time.

dienen – to serve (as in render service, usually used for devices nowadays)
der Diener – the butler, also (rare): bow as in bowing down

bedienen – to wait on someone in sense of restaurant
die Selbstbedienung – self service
die Bedienung – the waiting personal, the handling/usage of devices
die Bedienungsanleitung – the user manual