"bedeuten" is the German word for "to mean". But why? And what does "deuten" mean. And what does that have to do with "deutsch". Today, we'll find out. 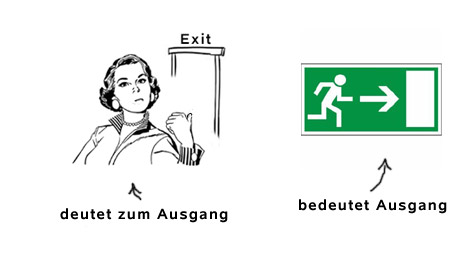 and welcome. First I want to say a quick thank you to everybody for the language school thing. Your questions are great and I’m definitely gonna use them in some form. Thanks for taking the time. And if you don’t know what I’m talking about… you totally missed out ;).
With that said, let’s get to our German Word of the Day. This time we’ll have a look at the meaning of

And looking at deuten doesn’t only mean unlocking whole bunch of really cool and useful vocabulary like bedeuten or deutlich, it also means to learn about the origin of a word that is inseparably connected to learning German. And that word is: frustration.
Oh… hold on… I meant the other word, the one that is even more connecteterer  to learning German. The word for German itself… deutsch.

It all started with the super mega ancient Indo-European root tē̌u-. The meaning of that root was something along the lines of to swell and it’s the origin of words like thumb (looks swollen compared to other fingers), thigh (looks swollen after Christmas)  and thousand, which originally was just a word for large number, mass. Now, another spin off of the Indo-European root was the Germanic word þeuðō. No idea how to pronounce that but the meaning it had was kind of similar to the original idea of thousand: *þeuðō meant large number of people and later became one of the Germanic words for tribe, people, folk. The original meaning of deutsch wasn’t far from that – it meant  something like of the people, people-ish. With the people referring to the Germanic tribes as opposed to the Romans. One context it was used for was language. You could speak “fancy Latin” or you could speak “deutsch“. And in the early days that could refer to several Germanic dialects, including old English. And one evening in a tavern over a whole bunch of brewskies the people that would later become Germans adopted the word for themselves**…

“Hey, we’re kind of like one people…”
“Meh… not really”
“Well, anyways, we should pick a name for us. Anyone got an idea?”
“Uhm… we could call us … uhm… people.”
“Nice, and our language people’s. And our land peopleland.”
“Hooray.”
(**: might not have happened in a tavern, may have been a process of hundreds of years)

Not very creative.  English isn’t any better. They use the super generic word german and for the Germans and the german word for german for Dutch. Oh while we’re at it, the Finns say saksalainen, which is based on the Germanic tribe called the Saxons, in French german means allemand (Spanish, Turkish and many others use variations of that), which is based on the name of another Germanic tribe and the Slavic languages use something with the base niemi- (no idea where this comes from, I couldn’t find anything). Kind of crazy that there are so many different names for german across Europe. Anyway, time to get to our actual word of the day deuten.

We’ve learned that it comes from a word that meant as much as people, folk, usually referring to the Germanic people as opposed to the Romans. The verb deuten itself was to make clear for the common folk….  just think of it as the made up verb “to common-man”

Now, for both these meanings, German has alternative words that are more common. Zeigen is the more common choice for to point, deuten sounds a bit subtle, and in sense of interpreting it sounds less scientific than interpretieren or analysieren.
But still I’m sure you’ll see deuten used sooner or later. And I’m super mega sure that you’ll see all the related words. For the interpret-deuten, there is for instance umdeuten, which means to reinterpret and the noun die Deutung, which means interpretation, analysis… not in a strictly scientific sense but with intuition allowed.

For the pointing-deuten there are hindeuten, which unlike deuten can be used for abstract pointing, and the super common andeuten, which is just the beginning of pointing… or in other words: to hint, to insinuate

And these are not all.
Next up is the adjective deutlich and this one has actually preserved the original core of the verb because it means clear(ly), significantly…

Very similar looking to deutlich is deutig. It’s not used as a stand-alone but it’s super mega common in combination with ein-.

Eindeutig actually ties in with both the current meanings of deuten. You can see it as “pointing at just one thing” or offering “just one interpretation”. And of course, there’s also the opposite: uneindeutig. And zweideutig. And mehrdeutig. Oh, and vieldeutig. Looks like German is quite precise as to how unclear something is :)

Cool.
Now, these were already some really useful words. But they didn’t have their own headline.  The next one does…

When a word gets its own headline that means it must be very significant.
Hold on, let me say that again, this time in hint mode.
That MEANS that it must be very SIGNIFICANT.
Yep, bedeuten means to mean, to signify.

How did this meaning come about? Well, I think it’s kind of a mixture of pointing and making clear. Like in this use of the word, which is rare nowadays:

But I always think of it purely as the pointing-deuten. The fact that I got 80% in the exam “points at” (“inflicts pointing”) at the fact that I passed. The word German word Tisch “points at” the concept of a table. It “means” table.  Don’t know if that makes sense. Anyway, let’s look at some examples:

And now it’s time for a huuuuuuge pink but:
Bedeuten means to mean BUUUUUUT

Let’s examplain® that … get it… I mixed explain and ex… never mind.

The second is WRONG because there’s though involved. Bedeuten does not work that way… like.. .not at all. I’m not sure if people would even understand the second sentence. So far is bedeuten from thought. If you say

you’re NOT NOT NOT saying

That would be meinen. The version with bedeuten means that the fact that Thomas exist means A. Like, say, Thomas is real party pooper…

So even though bedeuten will often be a translation for to mean, maybe it’s better to think of it as to signify since this verb has the same usage pattern. And to signify is related to signal and sign and these are awfully close to pointing, which is one of the meanings of deuten. Tadah… everything nicely falls into place. Thank you languages, for being so orderly.
Now, this would be the perfect time to wrap up but instead let’s ruin the moment with a few random examples of words that are related to bedeuten and that are very commblah blah blah blah…

Yeah… the other moment would have been bedeutend better to wrap up. Anyway, we did it. This was our German Word of the Day deuten.The original idea was to make clear for the people and all the versions of today kind of orbit that idea in one way or another.
As always, if you have any questions or suggestions or if you want to try out some examples, just leave me a comment.
I hope you liked it and see you next time.

Oh, if you feel like a dose of German romanticism and heavy-heartedness to really drive the autumn home… here’s the perfect song.
The first line has bedeuten in it and it’s quite famous, that’s why I thought of it.
It’s a poem by the German poet whose name sounds like a super hero alias, Heinrich Heine, which was later congenially turned into a song by Silcher. It’s about the Loreley, a famous mystical, beautiful woman that sits on a rock next to the river Rhine combing her golden hair thereby distracting skippers from their skipping duties… well.. Heine’s version is a bit more poetic :)

auf etwas hindeuten – to point to something (abstract only)

andeuten – insinuate, suggest, imply, hint
die Andeutung- the insinuation, the hint (can be positive and negative)

umdeuten – reinterpret (not for pieces of music)