Decke means cover. And under that cover we … ahem… discover a whole bunch of useful nouns and verbs. Today, we’ll cover all those and more :) 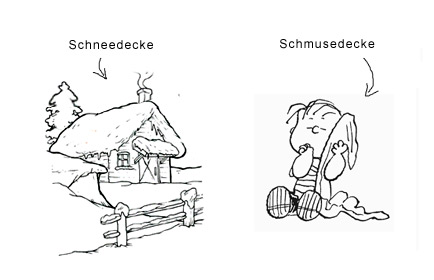 And that means of course that we’ll cover (hint, hint) the whole  decken-family – “the Deckens”. Decke is just a nice icon for it, so that’s why I picked it.
The Deckens are probably some of the oldest words ever. Forget all those super ancient Indo European roots we see all the time.

Those are like… recent. The root of  Decke dates back freaggin’ 160 million years to when it was the name of a Dinosaur… the Stegosaurus, also known as Stegstar or just Stegs. Those were just for friends though. The Stegosaurus was a cool dude who took it easy and he was widely known for his massive tile like spikes along his back that provided him with protection and extra awesome. The dinosaurs then “perished” because of “a comet”(yeah, right) but the other animals remembered them and passed on their story to mankind.
And so people started using the word *(s)teg whenever they wanted to talk about covering.
In Latin, they had the verb tegere, which meant exactly that…  to cover. Toga (covering the body) comes from it, as well as tile (covering the house)  and it’s also the core of protect (from: pro- tegere) , which is sort of covering someone, and detect (de-tegere), which is quite literally to un-cover.
Other related words are to thatch and the deck as in deck of a ship, and on the German side we have all the variations of decken but also Ziegel (tile) and Dach (roof).
Now, the core idea of the decken-family, the covering, is pretty broad and ranges from a mere physical layer to abstract protection.
A Decke is not that broad. But it’s usually wide. A wide, flat layer of something that covers something… that’s eine Decke, no more no less.

Blanket, ceiling, cover… they all share that they are wide and flat and covering something. The context will always make it clear I think, which is good because Decke is part of many, many compounds. Some are about what the Decke is covering like Bettdecke (blanket) or Zimmerdecke (ceiling), others like Picknickdecke or Kuscheldecke (cuddle blanket) talk about what the Decke is used for and some tell use what the Decke is made of… like Schneedecke (cover of snow), Wolldecke (woolen blanket) or Pferdedecke … what?! … oh my god, those poor poni… oh wait… it’s a blanket FOR horses… hahaha, phew, what a relief.
So… this is a Decke. Wide, flat, covering. But it’s not the only noun in the decken-family.
A variation of Decke for example, is the word der Deckel. A Deckel is much smaller, solid and it’s purpose is not s much the covering than the closing of something.

Now, both Decke and Deckel are really only about the physical aspect of covering. The more abstract parts are covered by Deckung.

Hmmm… “Get down!”… “Fire in the hole”… I don’t know…. is it just me or is that a little too “adult” for a day time German language show. But anyways… in the second example we can see that Deckung is also used when it comes to nounifying the decken-verbs. But before we get to those,let’s quickly look at some examples for the Deck-prefix. I almost forgot about it but it’s part of many many compounds and it spans the whole range of possible cover-meanings.

Hey, I wonder if concealer has something to do with ceiling. That would make a lot of sense actually. Anyway, time to get to the verbs.

In English, there’s the verb to cover and that lives up to it’s name. It covers. A huuuuuuge swath of meanings.
German, with its bazillion prefixes, is a little more precise. In case of decken though… it has jumped the shark.
“What?! I did not jump him.”
Oh yes, you did German. You have not one, not two, not three, not four, not five but six different words for to cover. Half a dozen.
“But those are all 6 necessary nuan…”
Yeah, yeah, whatever… let’s look at this madness, shall we.
First, there is decken alone, and decken alone is used for abstract coverings. Things like covering costs or other “numeric” requirements…

or covering for someone…

Besides that, there’s the phrase sich decken mit. Literally, this means to cover itself with but the focus is not on covering in this case… it’s on fitting. Think of a blueprint the lines of which perfectly cover the lines of a copy… that’s pretty close to the real meaning … be in accord with.

Lastly, decken can also be used in the factual, physical sense of covering.

And by the way… one of the Grimm’s fairy tales is called “The Wishing-Table, the Gold-Ass, and the Cudgel in the Sack”… in German it’s commonly knows as

With the exception of roofs and tables, the physical covering is NOT done by decken but rather by the prefix-versions, namely zudecken, bedecken and abdecken.
Bedecken, literally “to inflict a cover/blanket on something”, is the most generic of the 3.

Zudecken first and foremost used in context of sleeping. You don’t abdecken or bedecken your child, any person for that matter. That would sound kind of creepy actually. Zudecken is what you do here, and the verb tells us that it’s done with care and that it’s for warmth.

The Bettdecke is also called die Zudecke sometimes. You can find it used in different contexts here and there, but the other verbs are better.
For example  abdecken. The difference between abdecken and bedecken is that abdecken puts more focus on the purpose…. you cover something so that others can’t see it, or so that it’s away from the air or the rain or something. You’d abdecken your plants  for example to protect them from frost. Or the veggies in the pan so the nutrients stay in the mix. Or your pimples by using an Abdeckstift (concealer) because you want your crush to think that you have super human skin…. all that is abdecken.

Abdecken also has a quite important abstract use, by the way… to cover for topics.

Bedecken wouldn’t work here, because it’s purely physical. And for the example with the baking tray… bedecken would be understandable but it sure sounds odd. I think bedecken has a notion of directly touching the thing that’s being covered… but I don’t want to go too much into detail.
So… bedecken, zudecken and abdecken can all mean to cover in sense of putting down a physical Decke.
So that makes 4 different German verbs for to cover. Two more to go. And of course one prefix  can’t be missing…

Ver® – always there.
Prefix for a modern world.

Seriously… there are so many ver-verbs in German, if you were to print them all out you’d get enough paper to cover moon. I mean by holding it in front of your eyes, of course.  The paper verdeckt the moon, it doesn’t actually bedecken it.

The ver adds its away-meaningto decken  so the core idea of verdecken is “using a cover in order to make something disappear”, be it by a physical cover or an abstract….verdecken is really versatile.

Don’t get me wrong… this is not a clearly defined difference between verdecken and überdecken. Verdecken could work fine too in the first example. But in the second example verdecken would imply that the window really hides the scroll bar, while überdecken only tells us that they overlap… so maybe I can still see it.
All right.
So those were the 6 different verbs for covering and they all have their niche.
And after so much covering, it’s time to do the opposite. And the most important verb here is…. drum roll… entdecken which means to discover…. so in both cases we have prefix that expresses “undoing”.

The second example is the title of a quite famous book, by the way. Most know it as “Windows Vista User Manual”. But any..  …. …. … … … … ..
… … … …
… … … …
… …ways,  entdecken is not the only verb. Of course. There is also aufdecken and aufdecken is a very good match for to uncover. Just like entdecken it’s about removing a cover but while entdecken is more about finding something aufdecken is about revealing.

Finally, there is the verb abdecken which is more abou… wait a second. WHAT? I thought abdecken means to cover?? Now it means  the opposite all of a sudden?
German, do you realize how insane that is??
“Uhm… I… the thing is…  the ab-prefix… I … it’s a mess, I know. I’m really sorry for being so confusing. Tut mir echt leid.”
You better be, German!
So… luckily, abdecken in sense of removing a cover is pretty much limited to roofs. But there it is THE word

What about all the other physical “uncoverings”?  Well, I don’t really know… people instead say stuff along the lines of removing the cover/blanket

Yeah… that’s what I call balanced. Six different words for to cover and then using the dumbest generic stuff like wegmachen for the opposite. Well done German. Well done.
Oh and well done also to us, because we made it :). Hooray. That was our look at the meaning of Decke and the whole decken-family. And as a little goodie here’s one more Decke-idiom … can you guess what it means?

And no, it’s not about adult things ;). As always, if you have any questions or suggestions or if you want to try out some examples, just leave me a comment.
I hope you liked it and see you next time.