A fun look at the word "das Blatt" and its CRAZY family which ranges from blood to flowers. 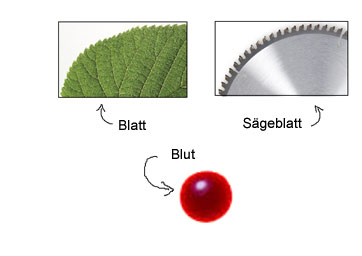 and welcome to our German Word of the Day. Spring is in the air, and this is the perfect time to have a look at the meaning of

And Blätter (the plural) are pure awesome. They give us shade, they make the city green, in fall they get all colorful, they make soothing rustling sounds but  most important of – they produce freaking oxygen.
You might have guessed it –  Blätter are leaves and one Blatt is a leaf.

But there’s a bit more to the German Blatt than that because it can make for some pretty cool colloquial additions to our vocab. Oh, and then there’s of course the big question:
why the hell is there blood in the little cartoon.
So let’s take a look :)

Leaf and Blatt are not related but they do have relatives in the other language. Leaf is related to das Laub. Laub is also about… uh… let’s call it “tree-hair” but Laub doesn’t refer to a single leaf anymore. Instead, Laub refers to an entirety of leaves and it’s a mass noun. Like… a lake has lots of water, a forest has lots of Laub.  You cannot have one Laub or two Laubs and in fact the word has no plural anymore.

I guess foliage would be a translation but just think of it as leaves.

Now, the English brother of Blatt is  blade. Just by the looks of the words, that makes a lot of sense, and it actually does, too, when you go by the look of the thing itself. I mean, blades and the edge of leaves essentially look alike. And there are leaves that you can cut yourself on.
And in fact, in compounds the German Blatt literally means blade. Sägeblatt is a saw blade and the shoulder blade is called Schulterblatt in German.
So, we could assume that blade and Blatt are based some ancient word that was about a flat thin thing, right? But…. that’s not quite it, actually. The real origin is something different and it’ll blow your mind.
But before we get to that, let’s look the more important meaning of Blatt.   I mean…  leaves are awesome, but  what makes Blatt REALLY useful in daily life is the fact that it also refers to sheets of paper.

Blatt means sheet and there’s not too much mind yoga needed – a sheet of paper is flat and thin and with a sharp edge (paper cut anyone?)
And by the way – this double meaning also existed in Latin. The Latin folium also meant leaf but also sheet and it’s where foliage and foil come from. And the awful word Feuilleton. That’s what German newspapers call the part where they talk about ballet and theater and opera. I think the better name for that would be Bore-eton but anyway.
So Blatt is the standard word for sheet in German and it’s very common in daily life both a literal sense as well as in a bunch of more or less figurative uses.

And Blatt is part of quite a few SUPER common idiomatic expressions.

Speaking of poker or card games in general – Blatt is actually also the word for a hand in a card game. The cards themselves are called Karten but the hand is the Blatt.

All this is pretty useful already, but the real colloquial super boost is the verb blättern and its prefix versions, which all revolve around the idea repeatedly  turning pages. The prefixes tell us a bit more about the flipping. I think the meaning is always clear from context.

So yeah… none of these words and uses are super essential or anything. But they’re definitely make for some nice blossoms on your young German tree.
And speaking of blossoms… that brings us right back to the origin of Blatt.

The crazy origin of Blatt and blade

Now you’re probably like “Yeah, I can see that blossom would be related. A blossom kind of is made from tiny little leaves.”
And yes,  blossom belongs to the same family as Blatt and blade – the family of ball.
Wait, what?? Ball?!?! That’s like the opposite of a blade. A blade is sharp, flat and thin. A ball is a lot of things… but not sharp, flat and thin. How does that make any sense?
Well… the very origin of the whole family is super-mega-uber-“you gotta be kidding me”-ancient Indo-European root bhel and the variation bleh.
The core notion of that root was inflating, swelling, bursting open … essentially it’s kind of about what our lips do when we say ble.  The get round, move outward and then they pop.
For words like blow and ball and phallus, the connection to that idea is somewhat obvious. But what how the heck does it connect to blood or Blatt or blade? What do they have to do with swelling?
For blood, das Blut in German, the inspiration was probably the way it burst and bubbles out of a wound. And the inspiration for Blatt was what the Blatt is before it’s a Blatt, a bud. Think about it… in spring, all leaves and blossoms are little balls at first that swell and then burst open. “that which opens up” – this might have been the original idea thousands of years ago.
Then slowly the focus shifted toward the shape of the “finished” Blatt and in English it eventually lost the connection to plants all together and focused on the thin sharp edge.
But the original idea was that of a blossom opening up, and this root is also the origin of words like blühen (bloom) , die Blüte (the blossom) and die Blume (flower). Oh and Chlorophyll, which we got from Greek and which literally meant yellowish-green leaf.  Oh and from the Latin side we got words like flora and foliage.
So yeah, if you ask me, this is one of the most surprising origins that we’ve had here so far and I hope you enjoyed it as much as I did when my intern handed me the resear… I mean… when I dug this one up. I did it.
Anyway, so I think that’s it for today. This was our little look at the meaning and the origin of Blatt. As always, if you have any questions or suggestions just leave me a comment. I hope you liked it and see you next time.
Oh and when you go outside right now and see the buds and blossoms… now you know how they got their name :).

blättern – to turn pages
umblättern- turn one page
durchblätern- flip through
überblättern – miss by turning too many pages
aufblättern – opening a book
abblättern – to peel off, to flake off (for color)

die Blüte – the blossom, the blooming
blühen – to bloom, to blossom
die Blume – the flower
die Flora – the flora