Word of the Day – “die Schranke”

A fun look at the meaning of the super German sounding word die Schranke and what French fries have to do with limits, your closet and your arms.

Schranke as well as its brother der Schrank are great examples for the harsh beauty of the German language. I mean just look at it. Schrank! it sounds like a gearbox failure, and yet it means something like loving caress, as tender as a as a butterfly’s wi… okay of course this is crap. Schranke and Schrank are rather worldly things. And Schrankis actually pretty common. In fact, most of you probably have a Schrank at home and if you’re one of those people who put little post its on stuff to learn vocabulary, then you’ll know that a Schrank is a wardrobe. Or a cabinet. Or a cupboard. Or an armoire. Or a locker…. basically it’s a huge-ish piece of furniture that you use to store stuff in and – and this is the crucial part – it has doors. Without doors it’s called Regal.

Haha… I’m so funny. But seriously, there are all kinds of Schränke … a Bücherschrank is for books, a Schuhschrank is for shoes, a Kleiderschrank is for clothes, and a Badezimmerschrank is for bathrooms… like… if you have a few extra bathrooms spare that you need to store away… I don’t really understand how that works, actually. But anyways, time to move on and stop at our actual topic… the Schranke.
Meaning-wise Schrankand Schranke very little to do with one another but they both come from the same origin. They are related to the German word schräg, which means at an angle and Schrank and Schranke were both words for some sort of wooden grid-like structure. Beams that go across something. Timber framings, wooden fences , stockades, wooden beams that carry a ceiling… these were context where you’d find Schrank(e). But then the two words developed in different directions. And while Schrankshifted toward the idea of wooden enclosing and became a piece of furniture, die Schrankefocused on the idea of having one single beam that goes across something. From there, it took on the idea of blockade. And today the main meaning of Schranke is ….this: 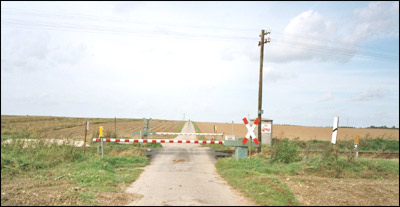 A Schrankeis a boom gate or railway gate. A wooden beam (or it used to be wooden) that is at an angle and crosses a road.

Now you’re probably like “Wow, knowing boom gate and Blut-Hirn-Schranke is really gonna help me in my next exam. “ And all I can say to that is that I know, that’s why I picked this to.. oh wait, that was just sarcasm, was it? Well, of course Schranke looks like the use is rather limited. But the real reason why we talk about this is not the noun itself… it’s the verbs that are derived from it.
There are not many. Dictionaries say that schränken as a stand-alone does exist. But dictionaries say a lot of things when they’re bored. I have never ever seen schränkenjust like this and I wouldn’t know what it means. But there are 3 prefix versions of it that are rather common: einschränken, beschränken and verschränken.
Einschränken and beschränken are very similar. They both express the idea of setting new, smaller bounds or limits for something.

Beschränkensounds a bit more technical and a bit harsher. Like… beschränken really sounds like a wooden beam while einschränken sounds more like there’s a buffer zone, if that makes sense. But in a lot of contexts you can use either one and it comes down to what’s more idiomatic.

Beschränkt is also often used in context of dumb or narrow minded.

The second one is very very harsh and offensive so you need to know the right time for it… I usually use it when I scold our interns. Anyway, so these were einschränken and beschränken. There’s also begrenzen which literally means to be-border and in a lot of cases they are interchangeable but the schränken-ones usually imply that humans are responsible for the limitation. So in context of limited natural resources for example begrenzt is the way to go.
All right.
The last word we’ll look at today is verschränken and the number one example that comes to mind is… Quantenverschränkung. Quantenverschränkung – quantum entanglement in English – described the phenomenon that a pair or group of particles consistently exhibit perfectly correlated observables even though they are in different locations like they’re using snapchat or something

“Yo, being measured, I’m turning clockwise.”
“Oh okay, I’ll do counterclockwise right away.”

Now you’re probably all like “What the hell is he talking about.”, face all skeptical and your arms crossed. Well, that’s perfect because that’s exactly what verschränken is used for in daily life :)…. crossing the arms.

There are other uses of verschränken but they’re very niche-y. The arms-one is the one you need.
And…. that’s pretty much it already. Hooray. That was our little look at the meaning and the family of die Schranke and at least the verbs einschränkenand beschränken will prove useful. As always, if you have any questions or suggestions just drop me a comment.
And oh… I almost forgot… here’s a little riddle for you…

What do you get when you order “Pommes Schranke”?

Well, it’s not really a riddle but “Pommes Schranke” is a colloquial term for a specific kind of dish and you sound really really local if you use it :). Little hint… it has something to do with the colors on a Schranke. Viel Spaß beim Überlegen. Ich hoffe, euch hat’s gefallen. Schöne Woche und bis nächstes Mal