German Word of the Day – “Bar”

Did you ever wonder why Bargeld is cash and not bar money. And why a bar is still Bar? And why"wunderbar" is "wonderful". In this post, we'll find out :) 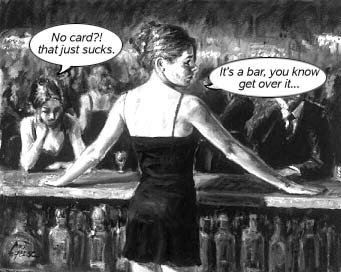 and welcome to our German Word of the Day. This time we will have a look at the many meanings of the kaleidoscope that is the word :

And we already have a call here, Michelle from Columbia, hi Michelle.
“Wooooow, I am on air… that’s like soooo cool… Me and the whole girls-college here, we are all really really big fans and listen to your show every time … .”
Cool, that’s REALLY nice to hear, so how can I help you Michelle?
“Yeah… so… is it like die, der or das Bar… please tell me, we all wanne know the gender so bad.”
Oohhh, well Bar can actually have 2 different genders, die and das an die Bar is something totally different than das Bar.
“Wow, that is like SO AWESOME… ”
But wait there is more… there isn’t only the noun Bar, there is also bar with no capital (there was a joke about no capital in bar as in no money in a bar here, but it was removed because it was deemed unfunny)
“Does it mean something way different then?”
Yes, it does.
“Oh my god, that’s like the most awesomenest word ever, can’t wait to find out about it.”
Cool, then let’s waste no more time and dive right in with a little poem I wrote:

Bar is where is sit and drink,
bar is how I’ll pay
Bar is putting pressure on me
each and every day

And if you take the little bar
and use it as a tail,
it guarantees, the stuff you do
will never ever fail.

Now everything should be clear :).
Seriously though… let’s visit the different bars one by one and do the probably first online pub crawl ever… and as in a real pub crawl, we’ll start at a rather lame place where no one goes:

Das Bar, coming from the Old Greek word for heavy – bárys, is the metric unit for pressure. The Anglo-American system uses PSI , which stands for pounds per square inch, which is also used to assess the quality of a boxing match. The conversion between Bar and PSI is something confusing that no one could possibly remember and it has at least one comma in it… if not 2.
On a little side note I want to mention that the atmospheric pressure, the pressure that is all around us every day, expressed in Bar is about… 1 . The same in PSI is … 14.7 … I … am … just … saying…
Anyway, das Bar is translated to bar, and it is something you will never ever need, unless you study Geography maybe, so let’s leave this boring joint and move on to a small little hangout that has a lot going on… because it is FKK!!!!

This word is a close relative to the English word bare as in bare foot but they do not come from Greek (unlike the first Bar we went to). Both words originate from the Germanic baza that meant something like naked and both words, bar and bare, have changed their meaning a bit over time. The shift has been a lot stronger in German though and nowadays bar is rarely translatable as bare. The only example where it works that I can think of right now is bare foot.

The German bar actually has 2 slightly different meanings – the different sides of naked if you will.
The first meaning focuses on naked as in not disguised or obvious or even pure. And there is one example which is needed everyday in Germany… Bargeld. If Germans talk about cash, what they say is “bare money” or “pure money” so not “packed” in plastic if you will. Here are a few examples.

And there is an idiom that expresses the German state of mind very nicely:

If you are a tourist … at least in Berlin…

At least if you want to go out. In many many bars they only accept cash. OH… and go for small bills… a 50 is ok… a 100 might lead to discussion and anything larger than that is virtually like having no legal tender at all. Seriously… if you have a 200 hundred Euro note you can run around for hours trying to find a place that will accept it.
And as far as plastic is concerned… a debit card is fine… but a credit card is not. I have NEVER payed in a bar or restaurant with a credit card like Visa or Master Card and even the idea feels strange to me. Germans love their Bargeld, they pay in bar all the time and credit cards are not used on a day to day basis.

The other meaning of bar interprets its naked origins a bit differently in that it means stripped of, devoid of or simply without. In this meaning bar is a preposition and, as you may know, prepositions in German demand a certain case… well… bar wants the Genitive… urgh… here are some examples.

Saying something like that will surely sound fancy and educated but it is NOT part of the daily speech. So don’t bother.
If you study something like philosophy or Anthropology or something like that, you may use it to show off. “Oh I wish my English were as good as your German.” “Where did you learn German so well?” is what they are going to say… provided you get EVERY single ending of the Genitive case correct. But talk to a busdriver that way, he will say “Was? Bargeld oder was?” So … this without-bar is something you won’t ever need… just keep it in the back of your head so you won’t get confused if you happen to read it somewhere.

Bottom line.. the only bar you really need is Bargeld and lots of it :). Because next we’ll go to a place that has all kinds of things for you.

You have probably seen words that end with bar like wunderbar or essbar. Wunderbar meaning wonderful is kind of bad example actually for it seems kind of out of the basic mechanics of this -bar that usually does work pretty much like the English ending -able.

The English -able comes from Latin, the German -bar however, is related to the word to bear. Did you know by the way, that the word born is actually a form of to bear? So I was born in 1980 literally would mean that mom carried me in that year . I found that quite interesting especially as the German geboren has the root.
Anyway….The connection of -bar and to bear is not immediately obvious but if you think of to bear as more like to support, it makes sense. An essbar thing is a thing that supports eating it… I mean not literally… it’s not like the meat cuts itself for your convenience… but at least you won’t get diarrhea from it. A lesbar thing is a thing that supports reading, be it because the handwriting is nice, it is formatted in a form that can be read or it is simply entertaining…. you get the idea … so feel free to play around and make up your own adjectives. Just remove the en-ding of the German verb and add bar. Bezahlbar ? Sure works… means affordable. Anrufbar? Of course… can be called. Adding -bar really yields quite consistent results… just don’t get too upset if you’re told that this specific verb rather works with -lich as an ending… there is really no rule to that. Adding -bar will at least be understandable.
And that is already more than many manage to do after they have visited the last bar on our tour… (man, this “How to stay in picture”-workshop really was worth the money… the very, very many money)

Every one knows die Bar and has been there. It is that place right there with the beer and such.
The word is actually not German by origin but has been imported from the English word bar… which has been imported into many languages by the way. The English word bar itself comes from the French word barre, and the original meaning is long straight solid “stick”.
Just like in English, die Bar can either be the whole place or just the counter. But as always German is a bit more strict when it comes to describing your location.

So… after having been to sooo many different bars, let’s rehab … … I mean recap of course.
So there is das Bar, it comes from Greek and it is a measure for pressure. Then we have bar coming from the same origins as bare. It can mean pure or without, depending from which perspective you look at the word naked. However, the only occasion this bar is really used in daily German speech is for cash money – Bargeld.
Third we have the ending -bar, that is related to the English word to bear and it works the same as the English -able, and finally there is Die Bar as a place to drink.
With so many meanings, there must be a potential for some nice play on words and in Berlin there actually is a place called “Bar jeder Vernunft”, which can either mean “Bar of/for every common sense” or “Bar without any common sense”… and the best thing is… it is not even a bar really… it is more like a variety theater…. anyway…
All 4 bars mean totally different things and have totally different origins, and it is just a coincidence that they are all spelled the same.
So this was our German Word of the Day, bar… if you have any questions or suggestions just leave me a comment. And if you have a funny story of how you tried to pay using plastic in Germany, I’d be happy te read that, too :).
I hope you liked it and see you next time…
And for those of you who can’t get enough of bar, here is the perfect song for you