A quick look at "ausstellen" and its two very different meanings. Also: the difference you never knew existed - rausstellen vs herausstellen 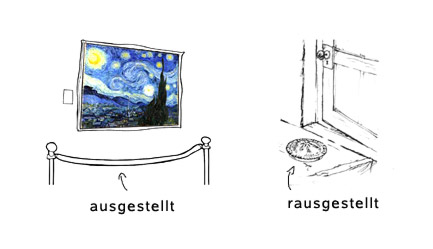 and welcome to another episode of Prefix Verbs Explained. This time we’ll have a quick look at the meaning of

A word that comes in handy if you want to save gas and if you’re a painter. And if neither of those things sound interesting then let me tell you that we’ll also learn something the r-version – that mysterious r-version that I keep mentioning without ever freaking bothering to give a detailed overview about what the hell that is. Yeah… I know, you find that annoying ;). Today we’ll add another piece to the puzzle, something about hin and herand r. And just so you know… it’s gonna be nerdy as hell and as a beginner you’ll be like “Whaaaaat”. So let’s waste no time and get right to it :)

The prefix aus has two loosely related ideas it can add to a verb – the idea of outside and the idea of off. And both come into play in combination with stellen. Stellenby itself is one of the three main “placers” – stellen, setzen and legen. English, too, has three verbs as put, set and lay. But there is no consensus among the languages about when to use them; nor has there ever been. Each language uses its placer-verbs for different things and there’s a good deal of random involved. Like… in English you put on a hat, in German you setzen it auf. And in English you set an alarm, in German you stellenit because stellen just happened to be German’s choice for setting machinery or devices. And that brings us the first meaning of ausstellen. The notion of setting for devices combined with the off-aus gives… to turn off.

But German has two other options for to turn off: ausmachen and abstellen and ausstellen is definitely the least common one. You might see it in a user manual or somewhere but I doubt you’ll come across it in daily life.
What you will come across, especially if you’re into culture and museums, is the second ausstellen. Take the literal meaning “to put out“, make that a broad sense of out there and add the context of art and you’re almost there: ausstellen means to exhibit, to show at an exhibition.

And yes, it is called ausSTELLENeven though the pictures are technically hung up ;). Again… with these placer-verbs you really shouldn’t put too much thought into why.
I guess we should mention that ausstellen is really limited to the context of showing art. So it is not to exhibit in sense of exhibiting curiosity or interest or something. Still, exhibit is the main meaning of ausstellen and the one you’ll definitely see sooner or later.
But there’s actually third meaning of austellen, and that one you might come across if you apply for a some official document. Because ausstellen can also mean that: drawing up, issuing official papers like passports or working permits or checks or similar stuff.

Why is it ausstellenand not auslegenor aussetzen? I really don’t know. I don’t think there’s a logical reason. Maybe stellen sounds more energetic, powerful and pompous than the others and people liked that for the official vibe.
Anyway, to turn off, to show at an exhibition and to issue/draw up for official documents – those are the meanings of ausstellen.
Now, let’s get to the r-version.

Whenever I talk about the r-version, some people say “Oh, it’s just a colloquial, short version of the her-version of a verb.” But that doesn’t really do reality justice.
Yes, her is where the r came from. But in recent decades, the r-version has started to come into its own. It has started to cover different ground, different nuances or at least a different vibe than her- not for all the verbs but for some and ausstellen is one of them. There’s rausstellenand herausstellen and they’re not always interchangeable – at least not if you want to speak idiomatic German.
Rausstellen is super turbo literal. It means to put outside. Not in some abstract sense of putting pictures out there, on display. No, it’s putting outside as in putting the trash outside…. which is one of the most common contexts for this verb. Putting the trash next to the street for the trash fairy to pick it up.

And in all of these examples herausstellen wouldn’t sound like proper, high German… it would sound like weird, unidiomatic German. And because the question “How was I” has taught me not to trust my own impression too much, I did a quick check up on Google. The phrase “Müll * rausgestellt” yields about 21.000 hits on Google, the phrase “Müll * herausgestellt” only 9. That’s a clear indicator that this rausstellen is not just a shortened herausstellen and that using herausstellen would not be more proper.
So… why is that? Well, one reason why her-doesn’t sound right might be the fact that her- has this notion of “toward the speaker/current scene“. And that notion just doesn’t fit well into a context that is about away… like putting out the trash. The single ron the other hand doesn’t have that notion anymore. It just marks directed movement.
And that’s not specific to rausstellen.

Here, both versions are equally fine, the her-version just being a little bit more high brow, because kommen implies that the movement is toward the speaker/scene.

Here on the other, heraus sounds pretty weird to my ears because gehen and the context imply that the person moves away from the speaker.
In absolute 110% proper high German, in these instances where the idea is away, you’d need hin- as a prefix. But for most every day contexts and verbs, this would be too high.

That’s just too much. Kind of like someone grossly over-enunciating … just with words.
A really nice example is the group for werfen (to throw). For rauswerfen(which means to fire, to kick out) you can find 330.000 hits on Google, hinauswerfen gives you 120.000 and herauswerfen… 32.900 (Here’s the link to a Google ngram, if you want to see the situation for printed German).

So long story short… you can shorten almost all her-version to just an r-version because… colloquial speech. But you CANNOT extend every r-version and make it a her-version because that might end up not idiomatic at all.
Cool.
What’s left to do for us? The meaning of (he)rausstellen. There are two, actually. The first one is to put special emphasis on something

The idea of this is actually not too far from the whole exhibition thing we had. The boss puts the teamwork out there on a podium. And that’s also why her works just fine here… because the teamwork is put in the center of the scenery, not away from it.
The more useful herausstellen is the one that comes with a self reference.. sichherausstellen. Again, the literal idea is about putting something out there for the world to see… in this case oneself… and that is not too far from the actual meaning: to turn out.

It’s nothing you really need in daily life but when it comes to written German this is pretty common and definitely a good word to know for B2-level students.

And that’s it for today. This was our look at the meaning of austellen and our little nerd moment about r-versions and her-versions and I really hope it wasn’t too boring :).
As always, if you have any question or suggestion about any of this, just leave me a comment.
I hope you liked it and see you next time.

meanings:
to turn off (less common than ausmachen)
to exhibit (for art, not behavior)
issue, hand out (for official documents and similar stuff)

spoken past:
form of haben + ausgestellt