A quick fun look at the meaning of "rasten" and why someone who did some "ausrasten" is far from beingy well rested after. 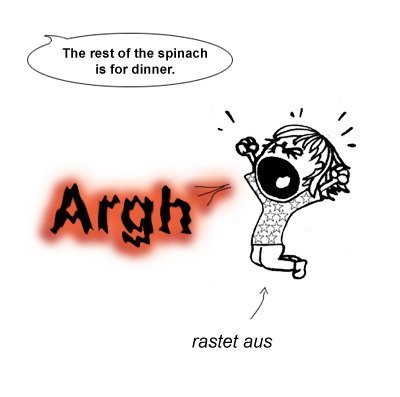 and welcome to our German Word of the Day in 2019, the year that looks like eros in a mirror.
Are you ready for a whole new year of crazy rules, overly precise words and gazillions of endings and endings with endings? Or in one word: are you ready for … German?
Awesome!
Then let’s hit of 2019 with a look at the meaning of


It looks quite similar to the English rest so if I told you that the two are actually not related, that would be kind of a surprise.
But who cares about “kind of a surprise”?
German learners are a a hard working, honest folk. They like their beers cold, their latte without milk and their surprises real. That’s how things are in this neck of the woods.
And the real surprise is that rest is actually two words that are NOT related to each other. And rasten is related to only one of them.
Intrigued yet?
Purrrrfect. Then let’s jump right in….

It sounds really hard to believe but the noun rest and the verb to rest actually come from two different families.
The noun is based on the Latin verb restare. This is a combination of the prefix re- , like for instance return, and the verb the Latin verb *stare, which simply meant to be/to stand.  Restare carried the idea of remaining and via the Romance languages (get it… I used via near Romance) it made its way to the Germanic languages and became the noun rest; or der Rest in German.

Now, it would make one billion yards of sense if the verb to rest were also part of that family.
I mean, resting usually means not moving. You “remain” on the couch.
But nope!
Etymologically, to rest and rasten most likely go back to the astonishingly ancient Indo-European root *erə- which was about the idea of resting after a day of travel.
Now, of course this doesn’t really make a difference, after all. If you want to associate to rest with the rest, that is fine. I mean… we’re trying to learn German, not to do science.
I just thought it was an interesting twist that these two words come from completely different backgrounds.
Yeah… I know, not exactly a jaw dropping twist. But hey, I’m trying, okay.
Seriously though, what might interesting is that also the noun die Ruhe (the quietness, the calm) comes from that root. And Ruhe, or actually the verbs ruhen and ausruhen, are the proper translations for to rest. Well, in the context of getting sleep/repose.

And what about rasten, then? How is that used?
Well, rasten has fallen out of fashion for the most part, and it’s more likely that you see the noun die Rast, usually in contexts of actual travels.

Oh and let’s also not forget about the nouns Rastalocken and Rastafari, which got their name because they are chilling (resting) so much.
Yeah… that’s… erm… that’s my funny for this year.
Anyway, you might be wondering why rasten is even a word of the day. I mean, it doesn’t seem all that useful.
Well, the reason is the verb ausrasten.
And for that we first need to mention the verb einrasten. Einrasten expresses the idea of some sort of latch snapping into place. It “goes to its resting place” if you will.

It’s pretty technical, though, and the only reason I brought it up is because ausrasten is the opposite. Something “latches” out of place.
And that something is… drumroll please… us.
Ausrasten is a really really common word for people losing control. You snap, you get unhinged. The main context is anger, but you can also find it in sense of partying really hard or being really really excited.

And that’s it for today :). This was our little look at the meaning of rasten and the family of rest and to rest, that didn’t turn out all that crazy.
If you want to check whether you remember the key points, you can now take the little quiz we have prepared for you.

And as always, if you have any questions or suggestions just leave me a comment.
I hope you liked it and see you next time.

der Rest – the rest
das Resteessen –  a dish made from leftovers
restliche/n/m/.. – remaining (in sense of left over)
restlos – completely (without a rest)