A fun look at the various meanings of "ausmachen" and what turning something off has to do with agreements, findings and bothering. Also: rausmachen. 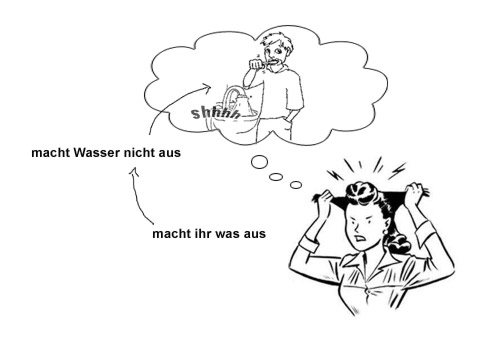 and welcome to a new episode of German Prefix Verbs explained. And I hope you’re concentrated because today we’ll look at one of the crazier ones. Get ready for the many meanings of

Aus is one of the most productive productive prefixes out there and machen is one of the verbest verbs ever. Yeah, that made no sense. But hey, you all know how common machen is. It means to make and also to do, and as if that wasn’t enough it’s also often used as a fall back if other options are hard to find.

This is not exactly beautiful language, but just recently I heard someone say that. And I totally felt him. I was like “Yeah man. Make that stuff into the box, man.” The thing is that neither stellen nor legen sound quite right there.
Anyways, back to our verb. The prefix aus can add two notions to a verb: switched off-ness and outside-ness. And guess which one it adds to machen.
Exactly.
Both.

The first meaning of ausmachen is so straight forward, a ray of light through space looks like a serpentine road in comparison. Ugh… physics jokes. The black holes of humor.
So, the “switched off”-aus combined with machen means: to switch off, turn off.

German also has ausschalten and ausstellen and abschalten for that, but ausmachen is BY FAR the most common one. The only context in which it would sound odd is devices turning off themselves.

That sounds a bit like the screen has self awareness or something. Here,  sich ausschalten or better yet ausgehen are the right choices. Ausmachen also doesn’t work in sense of turning off people, but for turning off devices of any kind, it’s the word to go for.
Cool. We’ll get back to this switched-off-aus in the epic finale, but first
let’s  look at the other strand, the ausmachen that is based on the outside idea of aus. Better buckle up because there’s some crazy stuff ahead.

The ausmachen based on the outside-aus exists in English, too. Ausmachen is to make out.
Not the sexy, sometimes awkward but usually fun making out with someone, though. That’s NOT ausmachen. Ausmachen is the booooring to make out in the classic sense of making out something – as in recognizing stuff.

Now you might be wondering what that has to do with the idea of outside? Well, distinguishing something is in some way about making it stand out from the rest. Like… you have this foggy forest on the horizon and your perception, in that case the sense of vision, “carves out” the deer that grazes in front of it. Definitely abstract but I hope it makes sense.
Now, I feel like this making out isn’t all too common in spoken English. The German version is even less common. People would use erkennen or sehen.
However, this idea of making out was the base for another meaning of ausmachen, one that is uber common: to agree on something.
Now you’re like “Wait what? What does agreeing have to do with recogniz… oh hold on, wait, is it because agreeing is like recognizing common ground with someone?!”
And I’m just like “Yeah dude. You’re spot on!”
That’s exactly how the meaning came about. Think of two people trying to make an appointment… they’re trying to spot, make out a slot that fits both their schedules. And this logic also explains why ausmachen does absolutely NOT work for to agree in sense of only one person agreeing. Like… “I agree.”

Ausmachen doesn’t work here because there’s no trying to make out common ground. Ausmachen always involves two parties agreeing on something.
But even though it’s not as broad as to agree, it still is super common and it works for all kinds of small,  informal or semi-formal agreements in daily life.

Really useful word.
And there’s more. So far, the ausmachen was kind of us looking for something. But it also works for the other side. Here’s an example.

Here, we’re asking for something that distinguishes a good teacher from other teachers; some features that make a good teacher recognizable within the horde of teachers. So we still totally have this idea of distinguishing, recognizing only this time, it’s the characteristics that “make out” the thing or person. They make it “make out”-able, if that makes sense. Here’s a couple more examples.

This meaning is not as useful as the one about the agreeing but you’ll definitely see it here and there.
And it leads us to the next big idea of ausmachen…. yes, there’s another big idea. The idea of effect.

It does need some mind yoga but the idea of being distinguishable, recognizable, “make out”-able is not too far from the idea of effect. An effect usually is recognizable and if you add a defining feature to something, that does have an effect. Like… making your running jacket light weight, good looking and breathable “has the effect that it’s (recognizable as) a good running jacket.”
This broad, vague idea of effect is also part of ausmachen. And that’s no wonder, considering that ausmachen is actually kind of the literal translation for effect.
Wait, what?!?!
Yup, you heard that right. Effect comes from Latin and it’s a combination of the prefix ex and the verb facere. Ex means out (as in exit)  and facere is Latin for…. to make, to do. Nice, right?
But what does ausmachen do with the idea of effect? Like… how does it show?
One use is to express that something makes a (usually big) difference, which is kind of also an effect.

This is a nice to know phrasing, but what makes the effect-ausmachen really really useful is the more personal use. Here’s an example:

Taken literally, this means that something makes no difference for me, has no effect on me. In practice, it’s only used for negative effects.

And you know what… we actually just went full circle: back to ausmachen in sense of to turn off. Because… having a negative effect and turning off really do share some common ground.
Anyway, the idiomatic translation for the example can be any of the following:

Let’s look at some more examples.

I know that the structure is a bit weird. With the es and the mir all that. Definitely something to get used to. But the phrasing is super mega common in daily life and it’s worth investing some time. Here are a few fragments.

Maybe try out some examples in the comments as an exercise and I’ll correct you.
But wait, before we get to that, there’s one more thing we need to discuss… the r-version.

Just like most r-versions, the meaning of rausmachen is pretty much the literal combination of the prefix and the verb. Rausmachen simply means “making” something that was inside before not be inside anymore after; or in real English: to remove, to take out. Why not rausnehmen then? Well, the result of nehmen (taking) is having and that’s not always the purpose of the taking out. Like… when you take out a tick it’s not because you want to have the tick. You just want it gone. And that’s what rausmachen is.

Rausmachen is really quite useful and I’m sure you’ll hear it sooner or later when you come to Germany.
And by the way… it’s a good example why it makes sense to think of the r-version as a a category and NOT just think of it as a shortened her-version. Because when you look for herausmachen on Google you get like 20.000 hits, many of which are dictionary entries in various languages. For rausmachen you get 10 times as many entries; and they’re actually real uses. Sure, rausmachen is a colloquial but hey, that’s how people speak. It’s called language, not penuage… get it? Get it? Ugh…
Anyway, And calling it a “version” of herausmachen wouldn’t do it justice.

All right.
And that’s it for today. This was our look at the meanings of ausmachen and phew, that was quite intense actually. First, we had the meaning of turning off, then the idea of “seeing, recognizing” and the main meaning “to agree on something” and then we had this whole stuff about having an effect, making a difference and fazing someone, which we can think of as “being clearly recognizable”… you know… just if we want to find some common core for all of it :).
If you have any questions or suggestions or if you want to try out some examples just leave me a comment. And if you enjoyed it, hit that little like button and give me some like-love.
Schöne Woche euch und bis nächstes Mal.

other words:
rummachen – to make out (sexual sense)
rausmachen – remove (from inside), take out