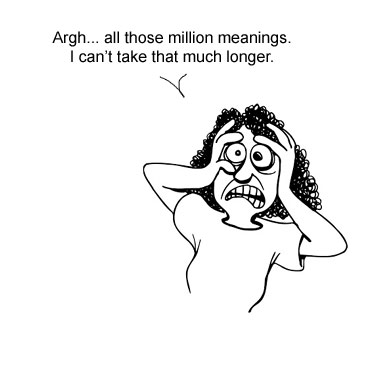 and welcome to a new episode of our series on prefix verbs, this time with a
verb that is kind of what German learners do with German grammar.
And I don’t mean wegwünschen :).
Get ready for a look at the one meaning of

Now you’re like “What?!Only one meaning?!?!”
And yes, it’s super unusual for a prefix verb but aushalten really only has one meaning. Here it comes:
stand, bear, deal, tolerate.

“Haha, Emanuel very funny. So it has like 10 meanings, right?”
But no, I actually wasn’t joking. Aushalten really only has one meaning that’s relevant and it is where is where the huge amorphous multidimensional meaning clouds of the four verbs I just mentioned intersex.
I mean intersect…. oh boy… these “jokes”. They must be hard to bear sometimes. Or should I say the “joke” is hard auszuhalten?! Because this idea of putting up with challenging conditions, holding out despite shitty circumstances is precisely what aushalten is all about.
And man… this is SUPER common in daily life.

And because it’s so common, here are some more :)

And Germans actually also use it when they’re really really amazed by something. Because… you know… Germans are the absolute masters of hedged enthusiasm.

Okay, that’s a bit of an exaggeration. But Germans do say that at times.

Now, some of you might be wondering how aushalten relates to the English to hold out. Well, it’s better to not think of them as translations. To hold out is just MUCH broader, it’s a much bigger meaning bubble and aushalten is only like a small part of it. And even when holding out is actually used with the underlying abstract idea of “holding your position, till something is over/out”, durchhalten or just halten are the more fitting translations.

All right.
Now, there aren’t actually any related nouns or anything to mention for us here so let’s get right to the r-version.

And like usual, the r-version can express the literal combination of the local idea of the prefix and the verb…. holding something outside in some way.

But this meaning isn’t really all that useful. Still raushalten is definitely something you should add to your active vocab. Why? Because it has an abstract meaning.
Combined with a person, raushalten expresses the idea of keeping someone from getting involved in something. And usually, this is used with a self-reference in context of some sort of debate or conflict.

And i think this is it. this was our look at the menaing of aushaletn and for absoultly no resaon this bit is full of typo’s. i know it sucks and U h8 it but its not that long so i hope its “aushaltable”.
“Just read summary of FAKE NEWS @yourdailygerman. Total disaster. Worst summary ever. SAD!”
Hey, stay out of this, Don!
So yeah… that’s it. As always, if you have any question or suggestions about today’ word or if you want to try out some examples and get them corrected, just leave me a comment.
I hope you liked it and see you next time.

to bear, to put up with, to withstand