A quick look at the meanings of "ausfallen" and what cancelled meetings have to do with extraordinary dresses and electricity blackouts. 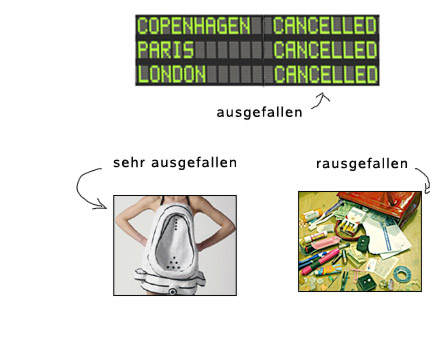 and welcome to another episode of Prefix Verbs Explained. Today we’ll have a look at the verb that’s probably the favorite word of all students… especially in summer.

“Honey, can you turn out the light?”
“Sure.” (shoves bed side lamp from the nightstand)
*crack
“Thanks.”
“That was our last one. We gotta get new ones tomorrow.”

What a dumb system that would be.

So we’re probably dealing with the idea of outside-ness and ausfallen can actually be translated to to fall out.

And if you’re now worried that German has gotten simple and convenient.. calm down. It hasn’t. This super literal ausfallen is pretty much limited to hair and teeth, though, so it’s NOT for random object falling out of your pocket.

This sentence would be understood in sense of your phone falling out of service and that’s because it’s essentially a variation of the main meaning of ausfallen:

to not take place although it was scheduled

Some event or something “falls out”, so it’s not there. The result is the same as the result of to cancel. But ausfallen makes it sound like the event cancelled itself. Instead of “being cancelled” a meeting “falls out”. It’s a pretty handy word, especially because some events just don’t take place without anyone having to had cancelled.

And in context with a phone or other technical devices you depend on, the idea is broadened to falling out of service. You expect your phone to work but it stops.

This technical context is also part of the noun der Ausfall but it’s used for a wide range of contexts where something you expected doesn’t come or happen.

Kreditausfallversicherungen… what a boring, long word. Had this thing had this name, we might not have a had a financial crisis :).

“I have some money to invest. Any ideas?”
“Hell yeah. Kreditausfallversicherungen!”
“WHAT?”
“Kredisauserfallichungersen. It’s a German word. They’re the shit.”
“Uh … yeah … uh … do you also have treasury bonds?”

All right.
So this was the bread and butter meaning of ausfallen. But there’s another one, a more fancy one.

This is the ausfallenwe know and it’s bad news for the village because the harvest didn’t take place (I think there’s an Aldi there though, so they’ll be okay).

This on the other hand is a reason to party because they had a good harvest.
And if you’re now like “Wait, how can one verb mean two things that are so opposed?” Well, the reason is simply that out is relative and it can be about both… getting out of the scene and getting out into the scene. Here’s an example in English.

And ausfallen works in both senses. Something falls out of the scene… like the air condition in trains in summer. Or it can fall out into the scene. Like a good harvest. A very good translation for this second ausfallen is to turn out.

It’s a bit formal and technical sounding and mostly used for things like reviews, financial balance reports, bottom lines, summaries, feedback decisions and tests. So you wouldn’t use it to tell someone how your soup turned out.

If you want to sound posh or impress your teacher, try and use this ausfallen but the one you’ll really need is the other one, the one that’s about stuff not happening.

All right. Now, before we move on, we should quickly mention a couple of uses that are a bit independent of the verb. The ge-form ausgefallen can be used in the sense of extraordinary and the phrase ausfallend werden means to become verbally abusive. I think the idea in both cases is falling out of some kind of norm, if that makes sense.

Cool.
I think we have a solid grasp on ausfallen now. Time to pimp it up…

Yo dawg, I heard you like r-versions?
So, I put an “r” in your car so you can roll while you drive.

Wow… that made noooo sense.

And rausfallen is a great example for r-versions taking the combination of verb and prefix literally. It simply means to fall out in sense of … well… falling out of something.

And that’s it. Really. I know some of you are waiting for some mind yoga but that’ll ausfallen today because … for a German prefix verb ausfallen is ausgefallen pretty straight forward ;).
As always, if you have any questions or suggestions or if you want to try out some examples, just leave me a comment.
Or just go out and enjoy the sun. That’s what I’ll do now, and by the way, if you’re in Berlin take a bath in the Spree. It’s AWESOME. Just make sure you don’t go in after a heavy rain because than it’s not that clean. But after a few hot, dry days it’s safe.
Anyway, schöne Woche euch und bis nächstes Mal.

meanings:
– to be cancelled, to not take place though originally expected to happen
– to be (to turn out)… only when there’s an adjective and only for result-like words like decision, summaries, feedback or reviews

spoken past:
form of sein + ausgefallen

opposite:
ausfallen – stattfinden (for meetings and other planned events)
ausgefallen (sense of special) – langweilig, normal