"anmachen" is one of the most useful prefix verbs. Today, we'll explore the various meanings and see what connects them all. Also: ranmachen. 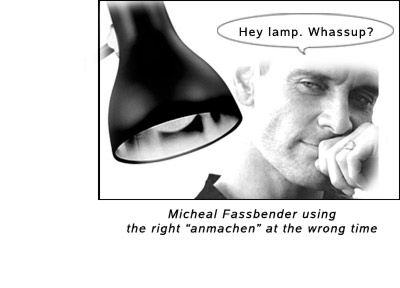 and welcome to another episode of German Prefix Verbs Explained. And wow, is today’s word useful. It can help you when it’s dark, it can help you when you’re single and it can help you if you want to eat a nice, tasty salad. Oh but you need to be careful, because it can also get you in trouble.
Now you’re like… “Wow, that’s broad, even for German prefix verb. What is that mystery verb?”
Well, ladies and gentlemen, get ready for a look at

Machen means to make and to do but… it’s much more than that. People use it in all kinds of contexts even if there are better alternatives. Like … schnell machen instead of sich beeilen (to hurry), sauber machen instead of putzen (to clean) or warm machen instead of erhitzen (to heat up). People really LOOOOVE to machen stuff.
The word an has two main notions:

“At-ness” is about location and expresses the idea of being right next to something (or moving there) and “on-ness” is about the state of being on as in switched onand these two notions overlap in English as well. Like.. light can be on on and the picture is on the wall.
In case of anmachen, it’s the latter. Anmachen is widely used as to turn on. Now, rule 23 of German says that German always has several words for a word. And that’s the case here, too. For to turn on there are also anstellen, anschalten and einschalten. But all these suck… oh, I mean, all these are not what you’d use for daily life stuff like your stove, your hair dryer or your lights. And your camp fire. And your cigarette. And the radio. And the air condition. And and and… long story short… anmachen is the best choice in daily life. Examples:

Now, to turn on is also used for people in sense of … uhm… raising an certain interest in immediate intercourse. Flipping that certain switch that says “mate-mode”. Anmachenhas that sense too.

Anmachen is also a common word for hitting on someone, using pick up lines and being all like “Hi.” and “;)”.
So in that sense it is not about actually switching the slip, it’s about just trying to slip it… I mean switch it.

Now, unlike to turn on,anmachen is not always sexual. It can just talk about general interest too, and it totally depends on context.

All right. So anmachen can be about sparking interest,be it sexual or general. But that’s still not all. The verb is not always positive…. anmachencan also mean something like to aggravate, to tease, to goad… it’s hard to translate. Basically, the idea is flipping someone’s angry-switch by using insults or being disrespectful. This “looking for trouble”-anmachen is especially common among teenagers but it’s not specific teenage slang …

based on the idea of “on-ness.”
Now, are there any others? Well, I would use anmachen with the notion of “at-ness” in sense of putting a picture up on the wall or hanging a lamp on the ceiling. But a few of my friends disagreed and said they’d use aufhängen so… maybe not.
There’s one meaning though everybody agrees on and … get ready for some random here. In a kitchen context anmachen means

to add spices, herbs and stuff like oil or vinegar to raw food like meet,
cheese or (most importantly) salad

Why? Pfff.. good question. Kitchen vocab is kind of crazy and twisted anyway. Maybe it’s because once you’ve added vinegar and oil and salt the salad is “on”. Like… really tasty. I don’t really know. Anyway… here are two examples

Unless you’re really into cooking this meaning of anmachen is probably utterly useless for you but I wanted to mention it anyway. And it got us into the kitchen which is where we usually meet… the r-version.

Like all r-versions, ranmachen is based on the local notion of the prefix, in this case the at-ness, and it roughly means “to make something so that it’s at/on something else”. And the main meaning is adding spices and other ingredients to food.

Besides this, there is also a use with a self reference… sich ranmachen. And this has a very very familiar meaning.

Shocking, I know.
But yeah, this exactly the same as anmachen… just from a different side. While anmachen was about trying to light one’s passion, sich ranmachen is about getting closer, trying to move to first base. Ranmachen doesn’t sound very elegant though and it’s usually more of a turn off.
And speaking of turning off… you can turn off your internet in a second because we’re done here and there’s nothing else on. Absolutely nothing.
This was our look at the meanings of anmachen and as we’ve seen the bulk of it is based on the broad idea of “setting in motion”. As always, if you have any questions or suggestions just leave me a comment.
I hope you liked it and see you next time.

Oh and if you like outtakes… here’s one the most disgusting burps ever. Happened while recording and it really took me off guard :)

meanings:
– to turn on (all kinds of devices as well as human lust but also fire, interest and anger)
– to add spices and herbs to raw food
– to put on (for pictures and other stuff you hang on walls)

spoken past:
– form of “haben” + angemacht

opposites:
– ausmachen (for devices),
– abturnen (for lust)
– abmachen (for pictures)